You are here: Home / Animals / How Did the Wildebeest Get its Name and What Does it Mean? 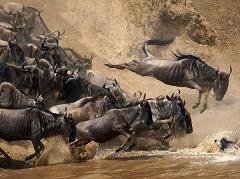 Also called the gnu, the wildebeest a hooved, or ungulate mammal.

The wildebeest is a large antelope that roams through grassy plains of southern Africa, grazing in huge, usually placid herds.

So why the “wilde beest” name? Well, they look scary, in the same way that American buffalo do.

They have massive bodies and bristly faces. When approached by a human, wildebeests will dash away to a safe distance, and then suddenly wheel around to stare menacingly back at the intruder.

It’s a scary thing to witness, but if you don’t come any nearer, you probably won’t have any trouble.

We suppose you probably wouldn’t want to be in their way if they were stampeding, but spread the gnus, the “wilde beest” has been given a bum rap.

Previous Post: « How Did the Moose Get its Name and What Does Moose Mean in Native American Language?
Next Post: Where Does the Tapir Come From and What is the Tapir’s Closest Living Relative? »