How do homing pigeons find their way home and navigate in flight?

Scientists have long been baffled by the uncanny ability of these small one pound birds to make precise point to point flights over great distances and to hold their course whether the skies be overcast or clear.

The answer to how pigeons home would undoubtedly provide a clue to the related mystery of how birds migrate, how, for example, some small songbirds fly 2,000 miles nonstop without going astray.

Ornithologists today are becoming increasingly convinced that pigeons use multiple clues, some of which overlap, to navigate. Pigeons, like many migratory birds, apparently read the positions of the sun and stars in order to orient themselves. Furthermore, it is possible that pigeons have tiny magnetic substances in their brain which enable them to detect variations in the earth’s magnetic field and determine their course accordingly. 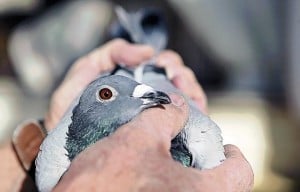 This general orientation does not, however, account entirely for the pigeon’s point to point navigation, which would seem to require another faculty. The pigeons do not locate their home by keen eyesight, as evidenced by experiments in which the birds wear frosted contact lenses and still come home.

Researchers in Italy believe olfactory cues play an important part, that the pigeons smell their way home. Biologist Mel Kreither at Cornell University, where extensive research on homing pigeons is being carried out, has several intriguing new theories.

Pigeons can see and sense polarized light, says Kreither, and their ability to detect its direction, and changes in its direction, may help the birds to orient themselves. They are also sensitive to ultraviolet light, which perhaps provides a cue. Pigeons can sense an altitude change of as little as 10 feet, because they can detect extremely small changes in barometric pressure, a drop of .07 millimeters of mercury, for example. This sensitivity helps to hold them on a steady course and also to detect advancing, though perhaps distant, weather fronts.

Still another clue to the pigeons’ navigational skill stems from their ability to hear very low sounds, down 20 to .05 hertz. These infrasounds, which are inaudible to us without assistance, are generated by a variety of sources, including mountain ranges, ocean waves, and thunderstorms.

The long waves, which sometimes travel hundreds of miles unbroken, may provide a pattern by which the pigeon miraculously finds its way home.