How many different types of Tofu are there and Where does Tofu come from?

Tofu is made by curdling soy milk, and then they manipulate the curds in different ways.

A variety of acids, enzymes, bacteria, and salts are able to coagulate the proteins in soy milk, that is, to unwind their long, twisted molecules, allowing them to rebind (cross-link) to one another like rungs in ladders, forming a tightly tangled, solid network that separates out from the liquid. As in coagulated real milk, the proteins form curds, from which the tofu is made.

Real milk is usually curdled by rennet, a stomach-lining membrane in the fourth stomach of an unweaned calf, and containing the protein-digesting enzyme rennin, or chymosin. Makes you wonder how that little technique was discovered, eh? But see below. 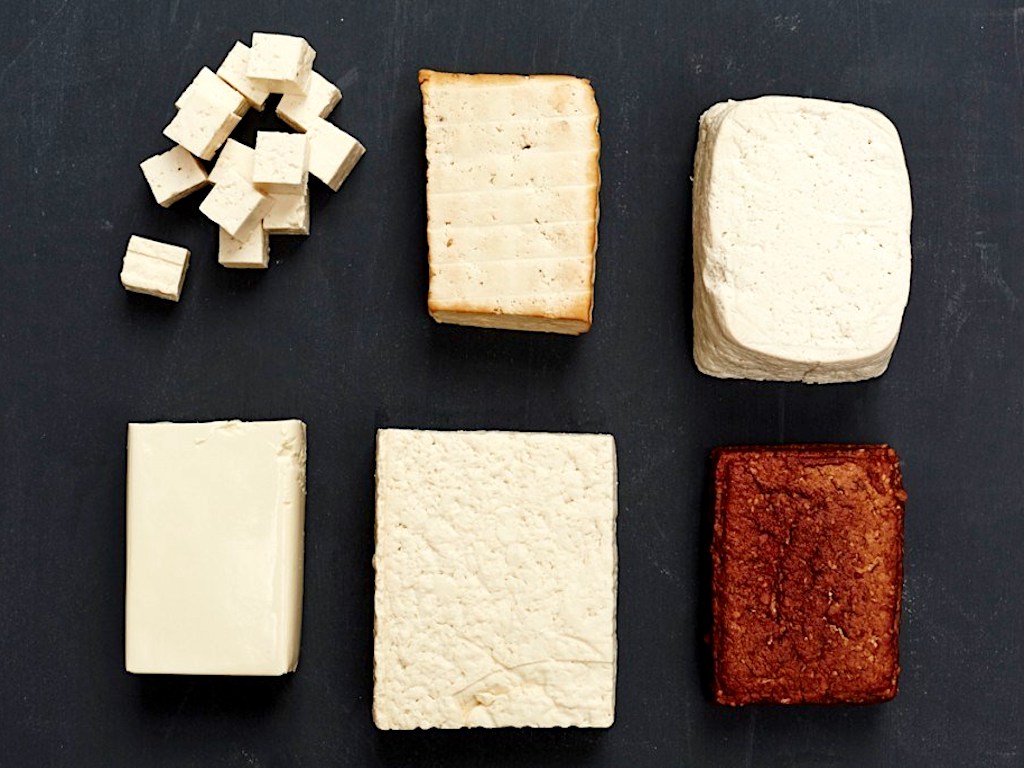 The rest of the animal presumably ends up as “milk-fed veal.” The curds are then fermented by molds or bacteria, aged and ripened into cheese. If only apocryphally, the story of rennet’s discovery goes back to biblical times, when wine, milk, and other essential liquid foods were carried in containers made from the cleaned stomachs of calves or sheep. Perhaps a less than meticulously cleaned calf’s stomach was used to carry milk on a trek across the desert, whereupon some residual rennin coagulated it into curds. Then, with the help of ambient bacteria they fermented, and voila! cheese.

Soy milk, on the other hand, is generally curdled by acids or salts rather than by rennin. The Japanese have traditionally used nigari, the bitter, salty non-sodium-chloride residue (mostly magnesium chloride) left over from the evaporation of seawater in making sea salt. Today, calcium sulfate is most often used. The curds are then pressed into blocks called tofu.

Purists insist that tofu isn’t “bean curd,” as it is often called in English. The curd itself is called oburo in Japanese; it isn’t tofu until it has been pressed so that the whey, the liquid that was left behind when the curdling took place, is squeezed out.

Various degrees of pressure and duration of pressing make tofu cakes of various consistencies from soft to firm and extra-firm. Little cubes of soft tofu can be tossed in salads, whereas the firmer, stronger forms will withstand deep-frying. Tofu is the modeling clay of cooking; it can be mashed, blended, formed, or cut into shapes and sizes to conform to almost any kind of dish, from salad dressings and sauces to sautés, stir-fries, and deep-fries. And it has the almost magical quality of absorbing the flavors of whatever it is cooked with.

Unlike cheese, which has already been attacked by voracious bacteria and/or molds and ripened often beyond olfactory appeal, tofu is a delicate, perishable product. It is sold vacuum-packed, or soaking in plastic containers of water, or in aseptic packages, or in bulk.

“Silken tofu,” a smooth, custardy tofu, is manufactured by a method more like making yogurt than making cheese. Instead of coagulating the soy milk and draining off the whey, makers of silken tofu add a chemical called gluconodelta-lactone (GDL), obtained by the action of an enzyme (glucose oxidase) on glucose.

The mixture is then packaged in its retail containers and heated mildly at 175 to 195°F ( 79 to 91°C) for about an hour. During that time the GDL spontaneously turns (hydrolyzes) into gluconic acid, which thickens the proteins into a homogeneous gel, with no separation of whey. It can be eaten with a spoon, like yogurt or custard.

All tofu should be refrigerated and used within a week. If it is kept in water, the water should be changed daily. It can be frozen, but the texture upon thawing will be chewier because freezing tightens up the proteins and squeezes out more whey. When it thaws, the tofu has a sponge-like texture that enhances its ability to soak up flavorful liquids if cooked with other foods.