Where does Botulism Bacteria come from and What causes Botulism infections?

He was nauseated and his vision was blurry. His speech was slurred, and he was having difficulty swallowing. His gag reflex was impaired. His eyelids were drooping and his face muscles weren’t working properly, he seemed to have some sort of paralysis.

When doctors tested his muscles by electromyography, stimulating them with electric currents, they found an incremental response to rapid stimulation. They asked him what he’d eaten, and he reported that he’d had some home-canned string beans and a stew made from roast beef and potatoes. The home-canned string bean report set off alarms, home canning is a notorious breeding ground for a bacterium called Clostridium botulinum. 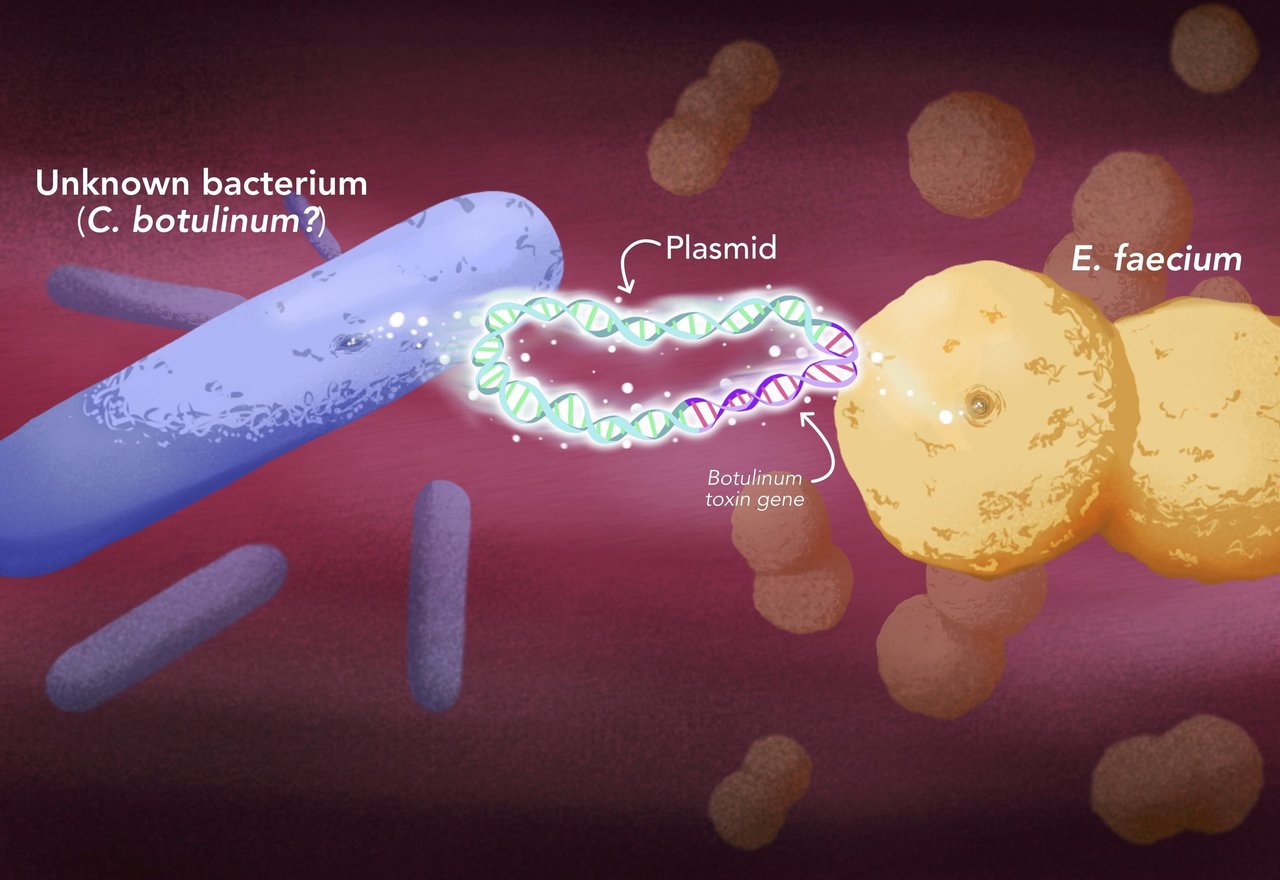 If the beans contained that organism, it was definite: the man had botulism. So they examined the beans and were mildly surprised to find no C. botulinum. But then they took a look at the stew and found what they were looking for. The stew had been cooked, kept on the stove unrefrigerated for three days, and then eaten without reheating. The covered pot had provided exactly the kind of oxygen-free environment in which C. botulinum thrives.

If salmonella is the most talked about form of food poisoning, botulism must come in a close second, in fact, the word is often used as shorthand for “some deadly poison in food.” But food-borne botulism is very rare. While 60 outbreaks of salmonella poisoning were reported to the CDC in 1997, there was only one outbreak of botulism, involving two people, both of whom survived. Of course, there are always more unreported cases of disease than reported, and this number does not include the 80 cases of infant botulism reported in that year, a special kind of botulism infection.

C. botulinum is an anaerobic, gram-positive bacterium that produces a toxin whose effects can be severe or fatal. The name comes from botulus, Latin for sausage, and is so named because many of the earliest cases in Europe were associated with home-fermented sausage. Sausage is almost never the cause of botulism in the United States, however. The bacterium is contained in spores, which are very resistant to heat. They can survive cooking, even boiling, and then germinate and start producing poison in the food when it cools.

Since they don’t require oxygen, they can live comfortably inside a can of preserved food. C. botulinum is actually a group of seven separate organisms, labeled A through G, which can be distinguished by the type of nerve poison they produce. A, B, E, and (rarely) F cause disease in humans, and C and D affect birds and mammals. Type G, which was identified in 1970, doesn’t appear to cause disease in humans or animals. For reasons that no one completely understands, the types are geographically distributed, type A is most common west of the Mississippi, type B in eastern states, and type E in Alaska. The six types that cause disease produce neurotoxins that are quite similar. They do their damage by inhibiting the release of acetylcholine from the nerve’s synaptic terminal. This prevents nerves from properly communicating with each other, resulting in muscle malfunction and paralysis.

Alaska’s food-borne botulism problem is particularly acute: 27 percent of U.S. botulism cases occur there, and the Alaskan rate is among the highest in the world. Type E, the most common type in Alaska, is associated with fish, both salt and freshwater varieties. There have been more than 100 outbreaks of botulism in Alaska since 1950, the latest of which occurred in January 2001. All the cases have been associated with eating fermented food, traditionally prepared by Alaskan natives in a grass-lined hole or in a wooden barrel sunk in the ground.

Since the 1970s, they’ve used plastic or glass containers, and the fermentation has been done above ground or indoors. The preparation by this more “modern” method has made botulism more common, the production of botulism toxin is more likely at warmer temperatures, and rates have increased during the last quarter of the twentieth century. Early diagnosis and antitoxin treatment have helped, there have been no deaths from botulism poisoning in Alaska since 1994. The CDC and the Bristol Bay Area Health Corporation, a health care delivery firm operated by Alaskan natives in southwest Alaska, have undertaken a campaign to educate Alaskans about botulism and to encourage natives to return to traditional ways of fermenting food. In this case, it isn’t just nostalgia: the old ways really are the best.

People who do research on botulinum toxins must be very careful and very brave. Even minute quantities of the toxins that that are inhaled, eaten, or absorbed through the eyes or breaks in the skin can cause acute poisoning and death. Laboratory technicians who handle the stuff have to undergo special training, and they have to be inoculated with botulinum toxoid vaccine, a special preparation the CDC makes available to people who work with the substance. Then they dress up in disposable lab coats, surgical gloves, and face shields before they go to work. The benches they work at have special Plexiglas shields. Handling clinical specimens from patients is risky enough; working with cultured or concentrated toxin is perilous.

Like other kinds of food poisoning, you’re much more likely to get botulism at home than in a restaurant: between 1950 and 1996, 65.1 percent of botulism cases were traced to home prepared food and 7 percent to food commercially prepared, including in restaurants. The type of processing involved in the remaining 27.9 percent of cases is not known. Being a vegetarian may be good for your health in general, but it’s not so good for avoiding botulism, because most cases of botulism are transmitted in vegetables. In second place is seafood, 87 of 444 outbreaks during that 47-year period were caused by marine products. Beef, dairy products, pork, and poultry have been associated with a minority of cases.

In many instances, treating food in a way that would completely eliminate the bacterium would make it inedible. To be sure you’d killed the spores, you would have to heat the food to 248°F for at least half an hour. That wouldn’t make your vegetable medley taste too good. So avoiding the bacterium or preventing it from producing the neurotoxin is the most successful approach. Sealing food in airtight packages doesn’t help, in fact, it encourages the growth of C. botulinum, which doesn’t like oxygen. A 10 percent solution of sodium chloride, table salt, helps inhibit growth and toxin production, as do food preservatives such as nitrite, sorbic acid, paragens, phenolic antioxidants, and ascorbates. Lactic acid bacteria, the kind that give yogurt its flavor, also inhibit toxin production in C. botulinum.

Food isn’t the only route of transmission for botulism. There is a form called wound botulism in which, as the name suggests, the bacterium invades and reproduces in an open wound or sore. In addition, there have been isolated cases of botulism in which the organism appeared to be colonizing the gastrointestinal tract without any infected food having been ingested. In some cases, the patients had had a history of disease or gastrointestinal surgery that may have predisposed them to colonization, but in other cases, the origin of the bacterium remains a mystery. These cases of undetermined origin are quite rare.

You can get a mild case of botulism that makes you slightly ill with blurred vision, nausea, vomiting, or diarrhea. In such cases, people usually don’t seek medical care; the symptoms go away by themselves, and that’s the end of it. But if the symptoms persist and you start having problems producing clear speech, difficulty in swallowing, weakness in your extremities, and trouble breathing, then you need emergency medical care.

If botulism is diagnosed, the immediate treatment is to induce vomiting and wash out the stomach to get rid of any poison that hasn’t already been absorbed. The worst problem is respiratory failure, and for this reason, anyone who gets a severe case of botulism poisoning has to be hospitalized.

Infected patients must be housed in an intensive care unit where intubation, tracheotomy, and mechanical ventilators can be used. There is also an antitoxin that should be administered, but it only prevents further damage and doesn’t reverse any damage that has already been done. You have to weigh the benefits of the antitoxin against its risks. The toxin comes from horses, so allergic reactions to it are possible, which can in some instances themselves be deadly. The toxin is helpful if you receive it less than 72 hours after initial symptoms. After that, it doesn’t do much good.

Death from botulism is rare, but when it does occur it is either because the disease wasn’t recognized early enough or because there were complications from the long-term mechanical respiration treatment. This treatment in many cases has to go on for several weeks, and mechanical breathing aids can sometimes be necessary for up to seven months before normal muscle function returns and the patient can breathe on his own. The man hospitalized for botulism infection in Arkansas recovered, but not before he had spent a full seven weeks in the hospital, including 42 days on mechanical ventilation.

Botulism has never been a common disease, and it is getting rarer and less deadly every year. The 1950s saw an average of 233 cases per year; by the 1990s, the average was 123. The fatality rate has also decreased markedly, from about 25 percent in the 1950s to about 5 percent in the 1990s. This decline in death rate is probably due to improvements in respiratory intensive care and the prompt administration of antitoxin.

There is another species of this bacterium called C. perfringens that is more common than C. botulinum but causes less serious illness. The symptoms are similar, and there is at least one serotype that can be fatal, but the CDC reports no deaths among the 2,772 cases reported between 1993 and 1997, a period that saw only 56 cases of C. botulinum infection.