Why and How Does Brining Make Meat, Poultry, and Fish Juicer?

Brining, soaking meat, fish or poultry in a solution of salt in water, is far from new. Surely, at some time in maritime history, someone discovered, accidentally, perhaps?, that meat that had soaked in seawater was juicier and had better flavor when cooked.

How does brining work? What does a bath in salt water accomplish, besides making the food, well, wet and salty? Are the claims of increased juiciness and tenderness justified?

First, let’s get our terminology straight. The word brining is mistakenly used for everything from rubbing salt on a roast to soaking it in a concoction of salt, sugar, pepper, vinegar, wine, cider, oil, spices, and, oh, yes, water. But rubbing dry salt on meat isn’t brining; it’s making a rub, which serves a completely different purpose. 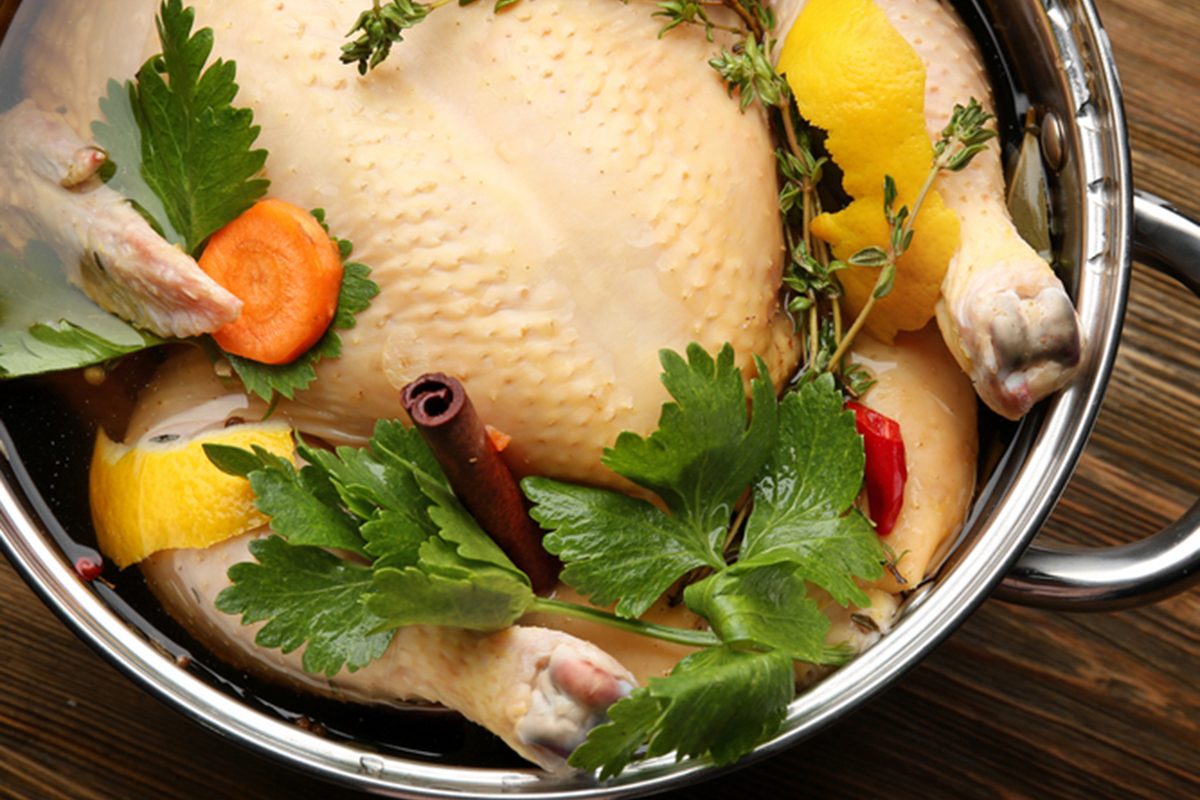 Some people call the soaking of meat in a liquid mixture of many ingredients brining, although it’s really marinating, which is a different ball game. On the other hand, the meat industry refers to the injection of salt water into pork as marinating, whereas it’s really a form of brining.

To keep this section somewhat shorter than the briny Moby-Dick, I’ll limit my discussion to the effects of soaking meat in plain salt water, although most brining liquids also contain sugar.

Meanwhile, what about the salt? There is very little dissolved salt (Techspeak: very few sodium ions and chloride ions) inside the cell, but there are tons of salt in the brine, usually from one to six cups per gallon.

Again, Nature tries to even things up, this time by the process of diffusion: Some of the plentiful salt ions outside the cell diffuse or migrate through the membrane into the cell. There, by a mechanism that still isn’t completely understood, it increases the protein’s ability to hold water. The result is a seasoned, moister piece of meat. As a bonus, the meat may well be more tender, because protein structures that are binding more water tend to be swollen and softer.

Brining is therefore most effective for relatively flavorless, lean meats that tend to dry out when cooked, such as today’s white-meat turkeys and fatless pork loins. But that, my friends, is where science ends and art takes over, because there are dozens of different ways to brine and cook various kinds of meat.

There can be no general answer to how long and in how strong a salt solution one should brine a given kind of meat that is subsequently to be cooked in a certain way, at a certain temperature, for a certain length of time. That’s where your confidence in the recipe developer must be the deciding factor, because trial and error rule. If you find a brining recipe that gives you tender, juicy, not-too-salty results, cherish it and don’t ask questions.

While we’re in a saline mood, let’s talk about salt’s ability to “draw the moisture out” of food, a historic method of drying and preserving meat and fish by covering it with rock salt. Isn’t that contrary to what I’ve just said about salt water’s increasing the moisture in brined meats? Not at all. (Watch me squirm out of this.)

Salt water and dry salt don’t have the same effect on food. Osmosis works because of a difference in the amount of available water between the two sides of the cells’ membranes. In brining, there are more water molecules available outside the cell than inside, so osmotic pressure forces some of the water inside.

But when you cover a piece of high-water-content food (and that includes just about all food) with solid salt, some of the salt dissolves in the surface moisture to produce a film of extremely concentrated salt solution, with an extremely low proportion of water, lower than that inside the cells.

Thus, there are more available water molecules inside the cells than outside, and moisture is extracted.