Does the Moon Ever Really Turn Blue?

Yes, but only once in a great while. There has to be exactly the right kind of smoke or dust in the air.

It happened most spectacularly in 1883, when the Indonesian volcano Krakatau blew its top, spewing dust all around the globe. The bluest moon since Krakatau was caused by a series of forest fires in western Canada in 1951. When these things happen, the moon itself doesn’t change color, of course; it’s just the way it appears when viewed through the smoky air.

Understanding this will take us a bit away from astronomy, but the explanation involves some fundamental ideas about the nature of light that will serve us well in many other situations. So even if you don’t care a fig about sad-looking moons, stick around. 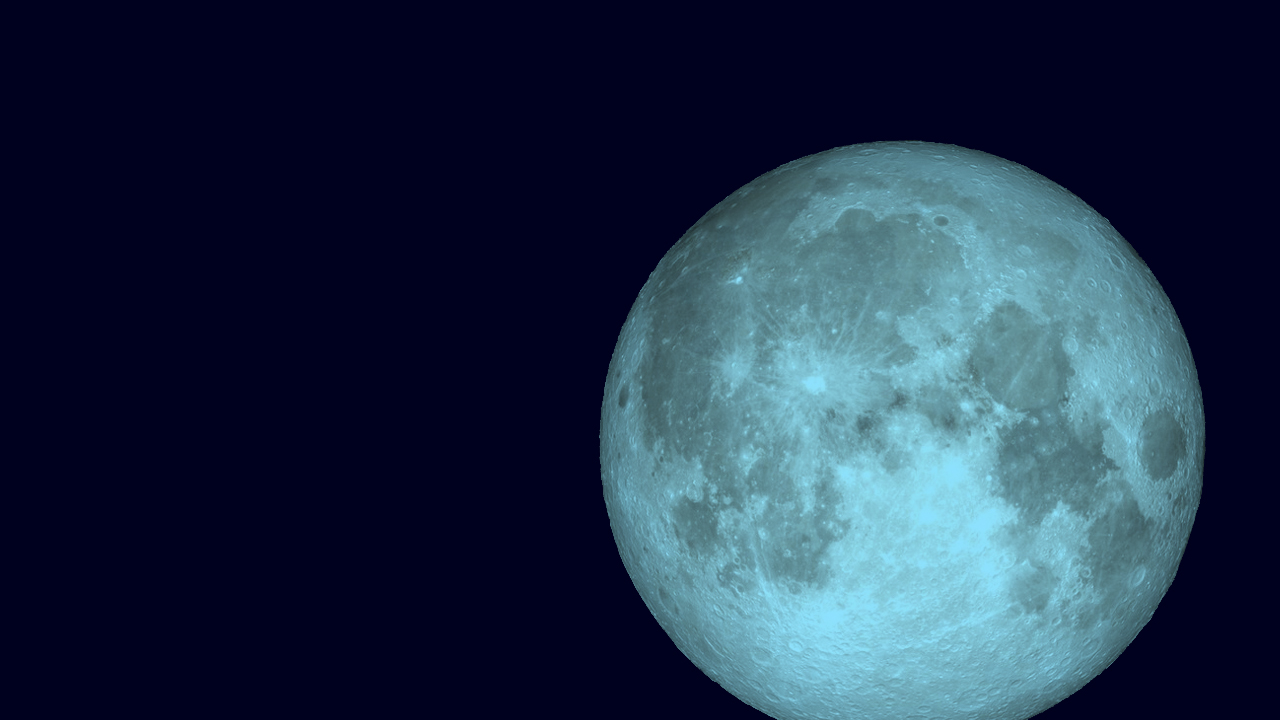 What’s behind a blue-appearing moon, and a lot of other things that we see, is the fact that light scatters. I don’t mean that it reflects, such as when it bounces back off the bathroom mirror to remind you that you’re getting older. By “scattering,” scientists mean that individual particles of light bounce off individual molecules and other tiny particles, like billiard balls bouncing off one another.

Did I say particles of light? Yes, indeed. And you thought that light consisted of waves? Waves of energy, rather than particles of energy? Well, we’re both right. Let’s get that little problem out of the way first.

Light, and all other so-called electromagnetic radiations, from radio waves to X rays, are indeed waves of pure energy, traveling through space at the speed of, uh, light. We can manipulate light waves by putting them through specially shaped pieces of glass or other transparent materials: lenses and prisms. Practitioners of the science of optics, who bring us our microscopes, telescopes and eyeglasses, have no problem treating light rays as if they were pure waves, making them reflect and refract (change direction) to perform a variety of useful optical tricks.

But certain other things that light does, such as knocking electrons out of atoms, can only be explained if light consists of a stream of tiny particles, like bullets from a machine gun. We call those light bullets, and the bullets of other electromagnetic radiations , photons.

So is a beam of light a stream of waves or a stream of particles? Perhaps the most astounding and unsettling discovery in human history was that light and other electromagnetic radiations behave as if they are both waves and particles. Or, if you prefer, they behave as either waves or particles, depending on what you catch them doing at any particular moment.

When a man named Albert Einstein (1879–1955) proposed in 1905 that light can knock electrons out of atoms as if it were a stream of bulletlike particles, he earned a Nobel Prize. (His prize was awarded for this work, for explaining this so-called photoelectric effect, not for his theories of relativity, which came much later.) It was almost as hard for physicists to swallow this two-faced idea as it is for you. But plentiful evidence has since proven beyond any doubt that it’s true. Not only that, but (are you ready?) the reverse is also true: Honest-to-God particles such as electrons can act as if they are waves.

Physicists are now quite comfortable with this weird subatomic schizophrenia and refer to it as wave-particle duality, or simply duality. No amount of further palaver on my part will make it seem any more reasonable to you. That’s just the way it is, and if you don’t like it, move to another universe.

Didn’t mean to be brusque there, but we’ve got to move on and explain blue moons.

I said that they’re caused by the scattering of light photons, presumably after colliding with something. Well, what would cause a particle of light to veer off in a different direction after a collision? Obviously, a collision with some other particle that is at least as big as it is. Because certainly, a baseball wouldn’t be scattered by a collision with a mosquito, would it? But if it collided with another baseball during its home-run flight out of the ballpark, it would be deflected into some much less fortuitous direction.

So we must conclude that a photon of light will be scattered best when it collides with something that is approximately its size.

But what is the size of a photon? How do you measure it, when it won’t even stand still, oscillating like a wave whenever it feels like it? Well, if light can be schizophrenic, so can physicists, who take refuge in the wave description of light whenever they feel like it. They consider the “size” of a photon to be its wavelength when it’s acting as a wave. (As a wave oscillates up and down, which is what waves do, the wavelength is the distance between two successive “ups” or two successive “downs.”) Our conclusion, then: Light will be scattered best from objects that are approximately the same size as its wavelength.

Hold on, now. The moon is about to turn blue.

The light that comes to us from the sun is a mixture of all colors, all wavelengths from red, the longest, to violet, the shortest. When all the daylight colors are mixed together, as they are when we receive them here on Earth, our eyes and brains interpret the light as no color at all: white light. That’s the light that we can see. But there are other “colors”, infrared and ultraviolet, for example, that our human eyes are simply insensitive to.

In the light that we can see, blue has just about the shortest wavelength; it consists of the “smallest” photons. It will therefore be scattered best by the smallest particles that it may encounter in its travels through the air, namely the molecules of nitrogen and oxygen that the air itself is made of. It was Einstein (again) who figured out exactly how molecules scatter light of different wavelengths: The shorter the wavelength, the more the scattering.

Now what if the air contains some bigger-than-moleculesized particles, such as particles of dust or smoke? Then the other colors of light, the longer wavelengths, can be scattered more than usual. If, and it’s a big if, a forest fire or volcano should happen to make smoke or dust particles that are exactly the right size to scatter longer-wavelength red light, then the light coming down from the moon will have a lot of its red scattered away before it reaches the ground. And light that is deficient in red looks bluish to us. Hence, so does the moon.

Why is there always a blue haze around some mountains?

Evergreen trees give off vapors of resinous chemicals. These vapors can react with ozone in the air to produce extremely tiny solid particles of just about the right size to scatter blue light. So blue light photons are being scattered and rescattered all around, while the other colors are passing by in straight lines. Thus, more blue reaches our eyes than the other colors.

Is that why the sky is blue?

Photons of light will also bounce off much bigger things, things much bigger than their wavelengths. That soaring baseball a couple of pages back would certainly be deflected (and its batter dejected) if it encountered the outfield wall in its attempt to become a home run. So wavelength doesn’t matter when the scattering object is bigger than all the wavelengths in visible light; they’ll all bounce off. That’s what happens when all the colors of light are reflected equally from a solid surface such as a mirror. No change occurs in the color balance.