How Does a Caterpillar Become a Butterfly?

It may be hard to believe that a beautiful creature like a butterfly was once an ugly, worm-like creature like a caterpillar, but this is exactly how the colorful, graceful butterfly’s life cycle works.

There are four stages in a butterfly’s life. The process of going from one stage to another is called metamorphosis. The first stage begins when the female lays her eggs, usually on a plant which will provide food.

Soon, a caterpillar, called a larva, begins to form inside each egg. After a few days, or a few months-depending on the variety of butterfly, the caterpillar is large enough to break out of the shell and continue growing outside. It begins by eating its shell, then goes on to eat the leaves of the plant on which its egg was laid. 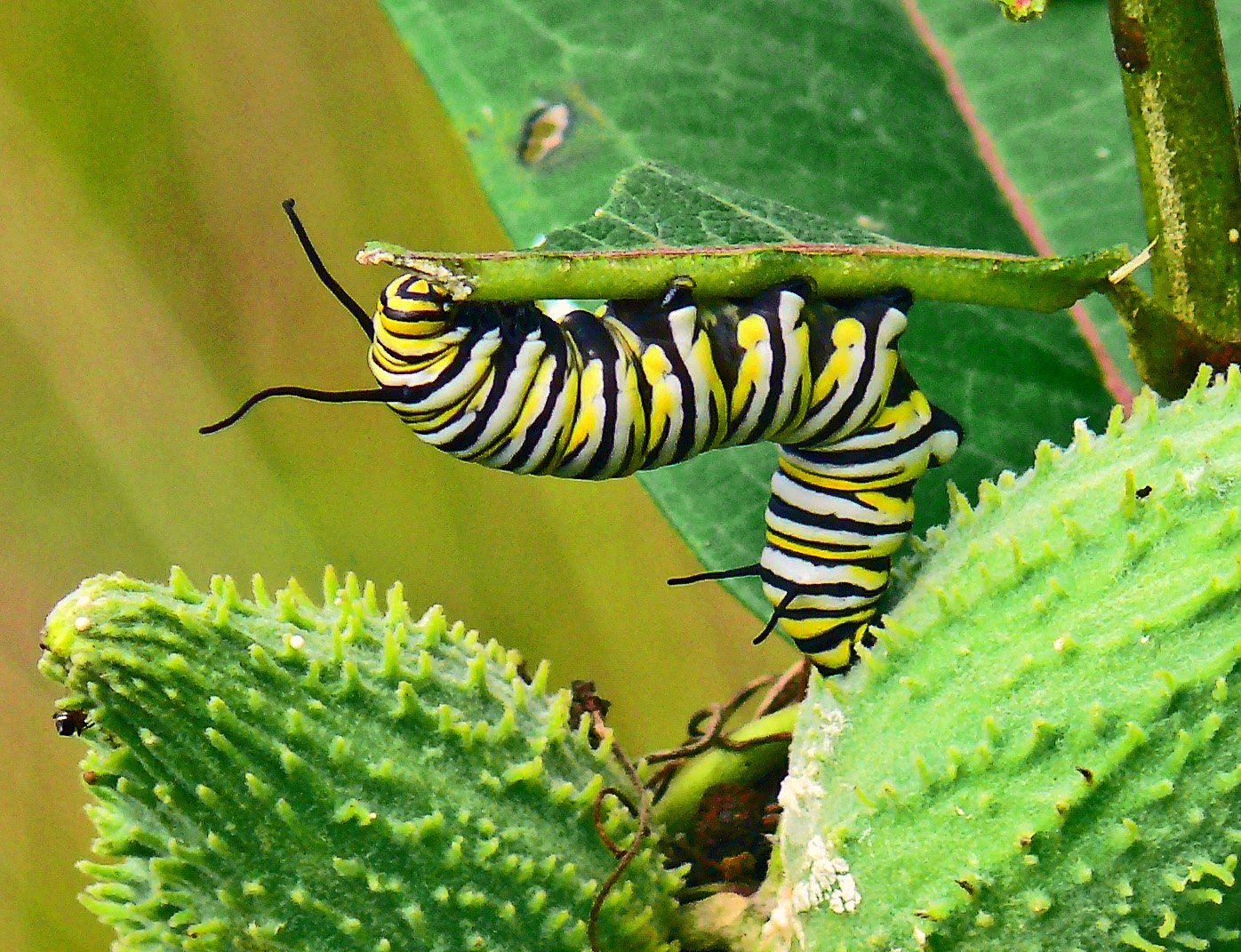 The full-grown caterpillar gives off a thin stream of liquid from glands below its mouth. This liquid hardens into a silky thread which the caterpillar attaches to a twig or leaf. With this thread it spins a shell-like covering around its body. Inside the shell, the caterpillar changes into a pupa, or the body of a butterfly. This stage can take from ten days to several months.

When the pupa has grown into an adult butterfly, it gives off a fluid which softens the shell. Then it expands its body and cracks the shell. Within half an hour, the butterfly has pumped air into its body, its blood begins to circulate, and it is ready to fly away.

Many kinds of caterpillars deliberately eat plants which, although healthy to them, are poisonous to enemies who try to eat them.

How Does a Caterpillar Transform Into a Butterfly?

If you’re interested in learning how a caterpillar transforms into a butterfly found the right website. Although both insects are part of the same species, they evolve at different times. This article will explore the process of metamorphosis and how the body blueprints of caterpillars transform into the body of a butterfly. Read on to learn more. Here are some of the most frequently asked questions that you may consider asking yourself as you study these fascinating creatures.

Metamorphosis From Caterpillar to Butterfly

One of nature’s most remarkable transformations is the metamorphosis from caterpillar to butterfly. The caterpillar starts its life by eating leaves and grows only a tiny amount. It releases a hormone known as Ecdysone as it grows. This triggers it to molt. It stops eating and spins a silken cocoon and then molts into an attractive butterfly. The hormone ecdysone functions as a juvenile hormone which triggers the metamorphosis process.

The caterpillar transforms into a cocoon or chrysalis during metamorphosis. The caterpillar alters its body structure to fit the needs of the butterfly’s new life form. The chrysalis grows and develops a body, six legs, and a head. It will eventually develop into an insect with four wings, an antennae, and four wings.

The imaginal disks of the caterpillar’s body begin to expand and grow as it grows. These discs are filled with proteins that enable the butterfly to quickly divide its cells. A typical fruit fly’s wing begins with 50 cells, and then grows to more than 50,000 cells by the time of its metamorphosis. Metamorphosis happens naturally and is an evolutionary process.

During the metamorphosis of the caterpillar to a butterfly it goes through a sequence of similar stages to the moth. The moth is made up of a cocoon that spins a silken house around it. The caterpillar is molted one more time inside the cocoon, and eventually develops into an adult butterfly. Once the metamorphosis has been completed, the new butterfly emerges from the cocoon and begins its cycle as an adult butterfly.

Process of eating a slough-and-eat

The ‘eat-shed-eat’ process of the caterpillar’s transformation into a butterfly is intriguing, if not terrifying. The growth of a caterpillar can be more than 100 times its size during the final stage of its life cycle. In this stage the caterpillar is molting four times, eventually forming its first butterfly chrysalis.

The entire body of the caterpillar alters as it transforms into a butterfly. In the chrysalis stage, the caterpillar digests its tissues through release of enzymes. These enzymes break down the tissues, transforming them into a liquid, in which the imaginal discs live. These discs contain blueprints for all the parts of the caterpillar’s body and utilize the liquefied protein to construct the body parts it needs.

In this period, a caterpillar consumes various plants, including leaves. This allows the caterpillar to gain enough calories and fat to turn into a butterfly. Although caterpillars don’t move much they are able to eat a variety of plant parts including flowers and leaves. Certain caterpillars are considered pests. You can keep a caterpillar from being caught by putting a net underneath it and releasing it in a place that is safe.

The imaginal discs of caterpillar’s imaginal disks begin to fold inwards and form a concave dome , or sock. The centre of each disc is intended to be the adult features. The bulk of the caterpillar’s weight is recycled into the butterfly’s chrysalis. The inside of the chrysalis is a nutritious soup that provides nourishment to the embryonic imaginal discs. The final bursts of ecdysone trigger the emergence and maturation of the adult butterfly.

The imaginal disks assist a caterpillar to transform into an insect by allowing its tissues to develop into various parts. The caterpillar begins the metamorphosis process by having 50 cells however, by the end of the transformation, it could contain as many as 50 000 cells. This process is an important evolutionary process and the caterpillar’s imaginal discs are crucial for the development of butterflies’ wings.

In the larva stage, the juvenile hormone is released. The hormone blocks specific genes which are essential for metamorphosis. These genes are located in Imaginal discs which are tiny discs of cells found in the caterpillar. The Imaginal disks kick in when the caterpillar wraps its body in a chrysalis and helps to transform into a butterfly.

Imaginal discs are vital because they carry the genetic blueprint for a butterfly to grow properly. These cells can be like stem cells, but they do not require commitment. They are locked in an area of the butterfly’s anatomy , and are waiting for the “go-ahead” to grow. When the caterpillar releases ecdysone, they will begin making parts of an adult butterfly.

The imaginal disks help caterpillars remember the smell of food as well as other sensory organs. When the imaginal discs are damaged, the newly developing limbs might not function as they should. Drosophila stops its development and gives them the chance to regenerate. Contrary to other animals, imaginal discs aren’t affected by hormones, and they are even able to be transplanted cross-species. This method can be difficult because the discs transplanted could create mutants with the incorrect parts.

Imaginal disks are blueprints for organs

The embryonic imaginal discs are a great platform to study embryo development, genetics, cellular biology, and organ development. Disc cells have many similarities with the epithelial cells that compose the majority of human organs. This model is crucial because it can help overcome the limitations of lethal embryonic mutations, where patches of mutant tissue may form. Scientists have access to imaginal disks much more quickly than other models of organ development.

Imagineal disks are blueprints for organs within an organism. Discs are formed in embryos and are programmed to create adult structures at metamorphosis. In larvae, these imaginal discs remain undifferentiated, but they do have some characteristics of organ development. To better understand the ways in which these discs generate organ development, scientists have examined the mRNAs generated in single discs of imaginal.

This study revealed that imaginal disks are the primary precursors to adult organs. They form the foundation for the development of all other organs. However, they discovered that embryonic organs weren’t fully developed when compared to their corresponding imaginal discs. They also found differences in the expressions of a variety of genes between the two kinds.

Cyclin-dependent Kinase 1 (Cdk1) is expressed in imaginal discs which is required for diploidy. Mutations in this gene force diploid cells to undergo endoreplication. Mutant Cdk-1 also promotes the development of polyploid cells in larval tissues. These differences may not be irreversible. In addition to Cdk1, imaginal discs contain Arrestin 2 that is found in all discs that are imaginal.

Six metamorphic phases are required to develop the butterfly. They include the first and final molts, the chrysalis and pupation. The prothoracic gland releases the moulting hormone, ecdysone which is responsible for stimulating the next stage, which is the chrysalis. However, the presence of juvenile hormone produced by the corpus allatum gland hinders the progress of these final stages. During the final larval stage, the caterpillar undergoes massive redistribution of nutrients. The caterpillar is able to mature when its JH levels have fallen to near zero.

JH signaling is deficient during the first two larval stages. This causes delays in metamorphosis. During the second and third larval instars, JH signaling-deficient larvae did not experience this delay. Researchers have identified the root cause of this delayed metamorphosis in a new study. Insufficient hormones in the juvenile stage slows the progress of the larval stage to the nymphal stage.

The caterpillar hangs from a tucked away tree in its larval stage. It creates a silk habitat for it. It then begins to molt and removes any dangling tissues in order to make its new butterfly form. The synthesis of juvenile hormone in the caterpillar’s body slows the development and maturation of the pupa stage.

After the molt, the butterfly emerges from its chrysalis. In this stage the caterpillar keeps its exoskeleton (called the chrysalis). The cocoon is the location where the final molt takes place. The chrysalis contains nutrient soup that feeds the caterpillar’s embryonic as well as discs that are imaginal.