How Does the Magnus Effect Cause a Spinning Ball To Curve To the Side and Who Discovered the Phenomenon?

When a ball travels through the air its surface is covered by a thin coating of air that is dragged along with it. Beyond this lies undisturbed air.

Between the dragged air and undisturbed air lies a thin boundary layer. At the front of the ball, this layer moves slowly. But as it travels round the ball, it speeds up and exerts less pressure, as dictated by Bernoulli’s law, which states that the faster a fluid flows, the less pressure it exerts.

At some point, the boundary layer separates from the ball’s surface. 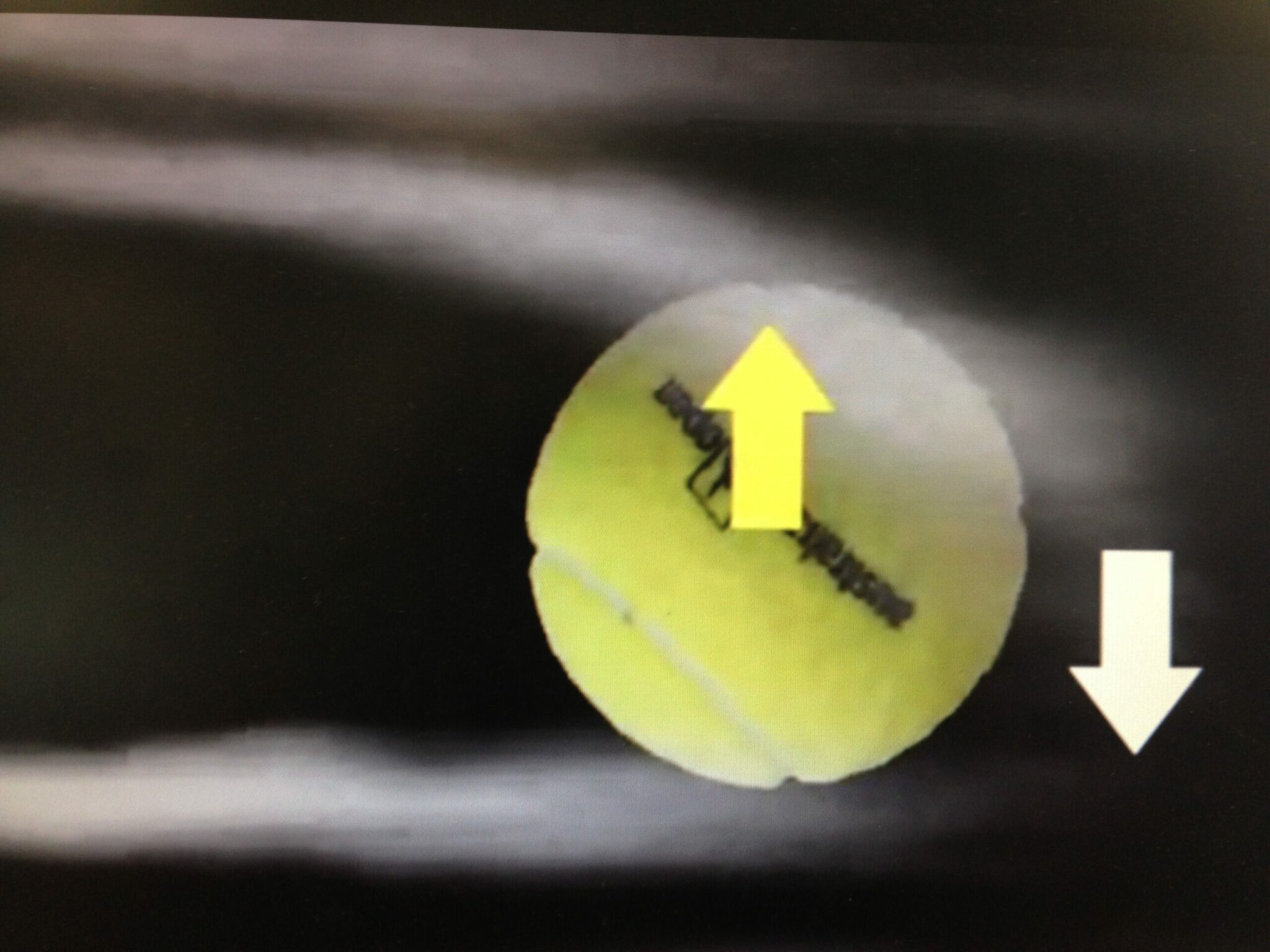 In a conventional swing, produced by the Magnus-Robins effect, the spin of the ball carries a very thin layer of air along with it.

This pushes the point of boundary-layer separation towards the back on the side of the ball where the spin is moving in the same direction as the surrounding airstream, and towards the front on the side that is moving against the air stream. The result is lower pressure on the side where the boundary layer has become extended, which causes the ball to swing in that direction.

That’s why a clockwise spin causes the ball to move from left to right.

Another way of describing what happens is to say that the shift in the point of boundary-layer separation pushes the flow lines of the air round the ball, the ball’s wake, to one side, so that the ball swerves to the other.

All this assumes that the flow in the boundary layer is laminar, with smooth tiers of air on top of each other.

In practice, part of the airflow may be turbulent, with air moving chaotically throughout the layer, and this is where reverse swing can occur. Experiments show that turbulent layers stick to the surface of the ball longer than laminar layers. So if the boundary layer is turbulent on one side and laminar on the other, the pressure will be lower on the turbulent side and the ball will swing to that side.

Under certain circumstances, turbulence can develop first on the side of the ball which is moving against the airstream, so that the boundary layer here separates later. The result is a reverse swing. Whether turbulence will develop depends on the type of ball, its speed, size and spin, so reverse swing is seen more commonly in some sports than others.

Sports such as cricket, which use balls with seams, give bowlers additional opportunities to produce both swing and reverse swing through turbulence.

Bowl fast enough and that swing can be made to reverse.

At the very high speeds produced by world-class bowlers, more than 130 kilometres per hour, the air moves so fast that the boundary layer becomes turbulent even before it reaches the seam of the ball. In this case the seam pushes the boundary layer away, encouraging it to separate from the ball earlier on the seam side. The ball then unexpectedly swerves in the opposite direction from usual. This is the notorious ten-bob swerver.

The effect can be produced by ordinary cricketers too, if their ball is scuffed, as a rough surface allows a turbulent boundary layer to develop more easily. Deliberate scuffing is, of course, against the rules.

The reverse swerve on a plastic football is due to boundary-layer separation.

On the side of the football where the relative velocity of the air and football is larger, the flow in the boundary layer becomes turbulent. On the other side it remains laminar. The laminar boundary layer separates from the ball’s surface once the airstream is no longer pushing it onto the surface. By contrast, the turbulent boundary layer remains in contact with the surface farther round the ball.

Experiments show that the main factor governing the direction in which a ball swerves is the ratio of the rotational speed of its surface to the ball’s translational speed. The reverse swerve occurs when this ratio is small (less than 0.4), while the Magnus effect occurs at higher ratios, which probably explains why the faster-spinning tennis ball swings in the opposite direction to the football.

The swerve of a spinning ball is commonly ascribed to the Magnus effect but, more than a century before Heinrich Magnus, Benjamin Robins studied spinning cannon balls and in 1742 he published a description of why, even on windless days, they swerved off course.

It is also perhaps worth remembering that Isaac Newton commented in 1672 on how the flight of a ball was affected by spin.