Should Mushrooms Be Washed Before Cooking or Will They Soak Up the Water?

The common white or brown button mushrooms in the supermarkets (Agaricus bisporus) are cultivated in beds, or so-called substrate mixtures, that can include anything from hay and crushed corncobs to chicken manure and used straw bedding from horses’ stables.

That knowledge bothered me for many years. Repeatedly warned against waterlogging my mushrooms by giving them a bath, however, I resorted to a soft-bristled mushroom brush that presumably whisked away the nasties from dry mushrooms without bruising them. It didn’t do much. I sometimes even peeled my mushrooms, a time-consuming pain in the neck.

But as the hymn “Amazing Grace” would have it, “I once was lost but now am found; was blind, but now I see.” I know now that the mushroom growers compost their substrate material for fifteen to twenty days, which raises its temperature to a sterilizing level. The compost, regardless of its origin, is germ-free before it is “planted” with the mushroom spores. 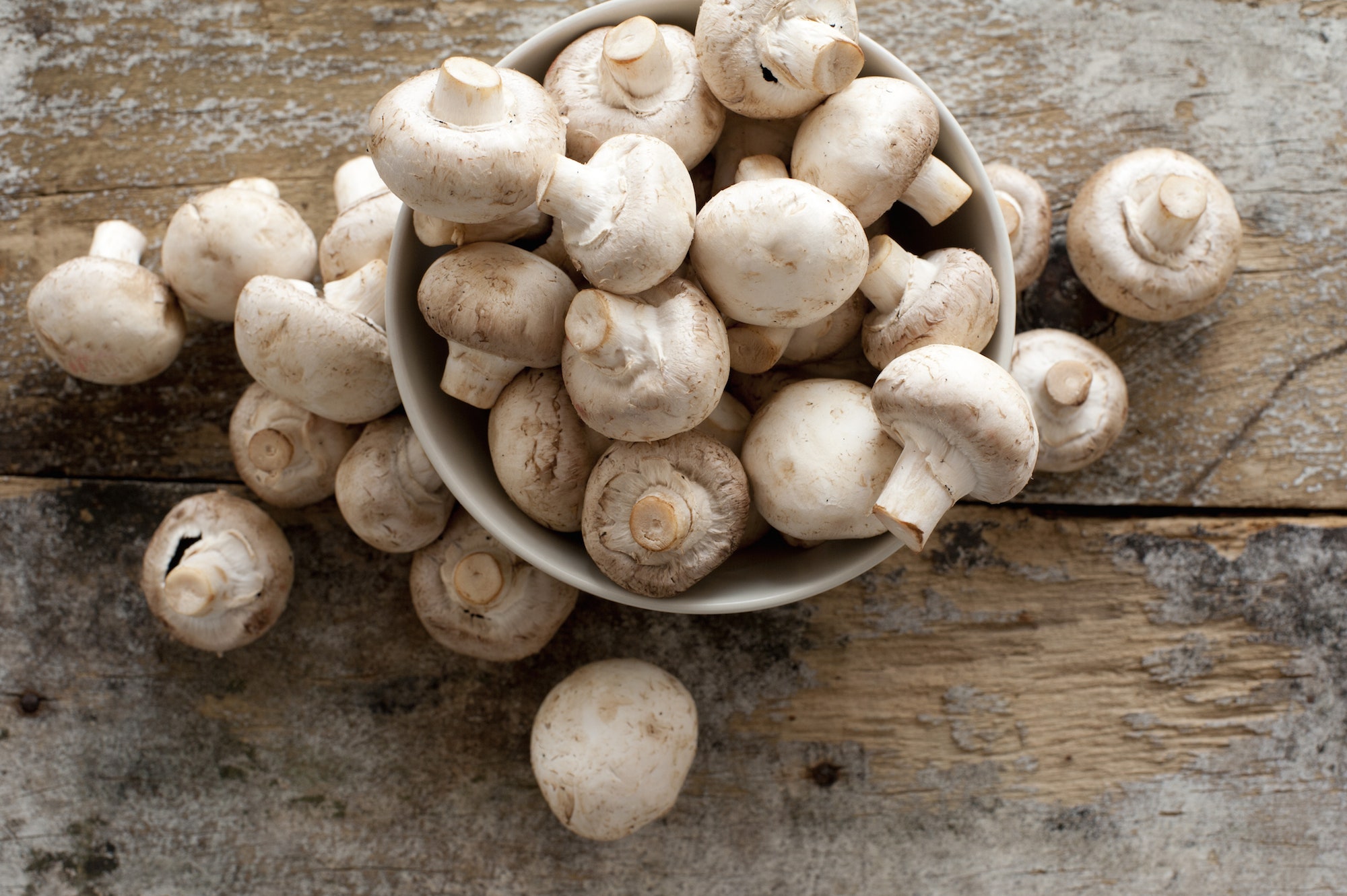 Nevertheless, I can’t help thinking that there is more to manure than germs. So I still clean my mushrooms. And yes, I wash them in water, because they don’t absorb more than a tiny bit, as I’ll show below. Moreover, I seriously doubt that a water wash removes flavor, as some books claim. That would be true only if their flavor resided mostly on the surface and was predominantly water soluble.

I was always suspicious of the sponge model of mushroom flesh because it never appeared to me to be the least bit porous, even under a microscope. (Yes, I did that.)

When I read Harold McGee’s book The Curious Cook (North Point Press, 1990), I felt vindicated. An equally suspicious type, McGee weighed a batch of mushrooms, soaked them in water for five minutes, about ten times longer than any washing would take, wiped them off and weighed them again. He found that their weight had increased very little.

I have repeated McGee’s experiment with two 12-ounce packages of white Agaricus mushrooms (a total of 40 mushrooms) and a 10-ounce package of brown ones (16 mushrooms). I weighed each batch carefully on a laboratory scale, soaked them in cold water with occasional stirring for McGee’s five minutes, threw off most of the water in a salad spinner, rolled them around in a towel, and weighed them again.

That’s probably because their caps were slightly separated from the stems and water was trapped in the gill spaces, not because their flesh is any more absorbent. Many other irregularly shaped vegetables would mechanically trap small amounts of water. And the timid “quick rinse” recommended for mushrooms by many cookbooks might trap just as much as my five-minute soak did.

So go ahead and wash your mushrooms to your heart’s content, at least the common button kind; I haven’t tested any of the more exotic varieties. But bear in mind that any brown dirt you see isn’t manure; it’s probably sterilized peat moss, with which the growers cover the composted substrate and through which the mushrooms actually poke their little heads.

And by the way, if you find your mushrooms releasing so much water in the sauté pan that they are steaming instead of browning, it’s not because you’ve washed them. It’s because the mushrooms themselves are almost entirely water and you’ve crowded them so much in the pan that the expelled steam can’t escape.

Sauté them in smaller batches or use a bigger pan.