What is the Difference between a Seal and a Sea Lion and How do you Tell them Apart?

Seals have shorter, fatter flippers and no visible ear flaps, and are often smaller than their cousin the sea lion.

Sea lions and fur seals belong to the Otariidae family in the Pinnipeds group of animals. 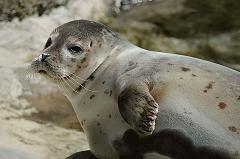 They have a semi-aquatic lifestyle, feeding and migrating in the water but breeding and hanging out on land or ice.

The name otariid is from the Greek word “otarion” meaning “little ear”, referring to the small but visible external ear flaps, which can be used to tell them apart from the true seals.

Related to them are the Walrus and true seal or earless seal which are classified differently under the Phocidae family.

True seals are sometimes called crawling seals to distinguish them from the fur seals and sea lions. They live in polar and temperate climates, and are very good swimmers, which helps with finding food in the water.

The earliest earless seal fossil found was from the mid-Miocene period, about 15 million years ago in the north Atlantic.