Wallabies, Wallaroos, and Kangaroos are all macropods of the Macropodidae family. 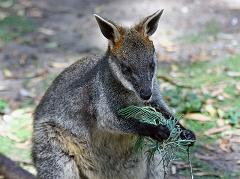 Macropods have very large hind legs and a long, powerfully muscled tail, and most are herbivorous grazers and have specialized teeth for cropping and grinding up fibrous plants.

There are about 55 different species of kangaroos and near-kangaroos. The differences among them are not particularly apparent, they’re pretty much determined by their size and where they live.

Kangaroos are generally bigger, up to 185 pounds for the red kangaroo, and they prefer congregating in large groups on open, dry, grassland plains.

Wallaroos are more stocky and not quite as tall, and they live in small groups in hilly country. The name “Wallaroo” is a portmanteau of wallaby and kangaroo.

Wallabies are much smaller, some as small as rabbits, which works out pretty well since they hang out in places without much traveling space, like dense forests and thick vegetation along rivers and lakes. They also live in small groups.

The word Wallaby is used informally for any macropod that is smaller than a kangaroo.

Be warned, though, that even these distinctions have exceptions, for example, since the tree kangaroo lives in the forest and is smaller than most other kangaroos, it should arguably be called a tree wallaby.

Sometimes the names for things just don’t play by the rules, and neither do the people who make up the names.