What is the Most Important Food Crop in the World and Where do Carbohydrates come from?

Also called grains, cereal grasses supply us with the starchy, edible seeds we treasure: wheat, rice, rye, oats, barley, and corn. Not only do these six plants sustain most of the world’s human population, but they feed the cattle and poultry who turn them into meat. Grains are the most ancient and still the most important of all food crops.

Wheat is probably the oldest. It is still a widely cultivated grain, with a worldwide annual production (in 2003) of 556 million metric tons. It is surpassed by rice, at 589 million metric tons, 90 percent of which is grown in Asia. But the world’s champion is corn (maize), with 638 million tons being produced in 20o3. All other grains (barley, rye, oats, and sorghum), known as coarse grains, total another 242 million metric tons worldwide. (Source: United Nations Food and Agriculture Organization, FAOSTAT.)

The most important nutritional feature of all grains is their starchiness. Starch is, of course, a carbohydrate, as are its building blocks, the sugars. So speaking chemically rather than agriculturally, this chapter might more broadly, if also more textbookily, be titled “Carbohydrates,” whether from grains, legumes, or, in the case of honey, insects. 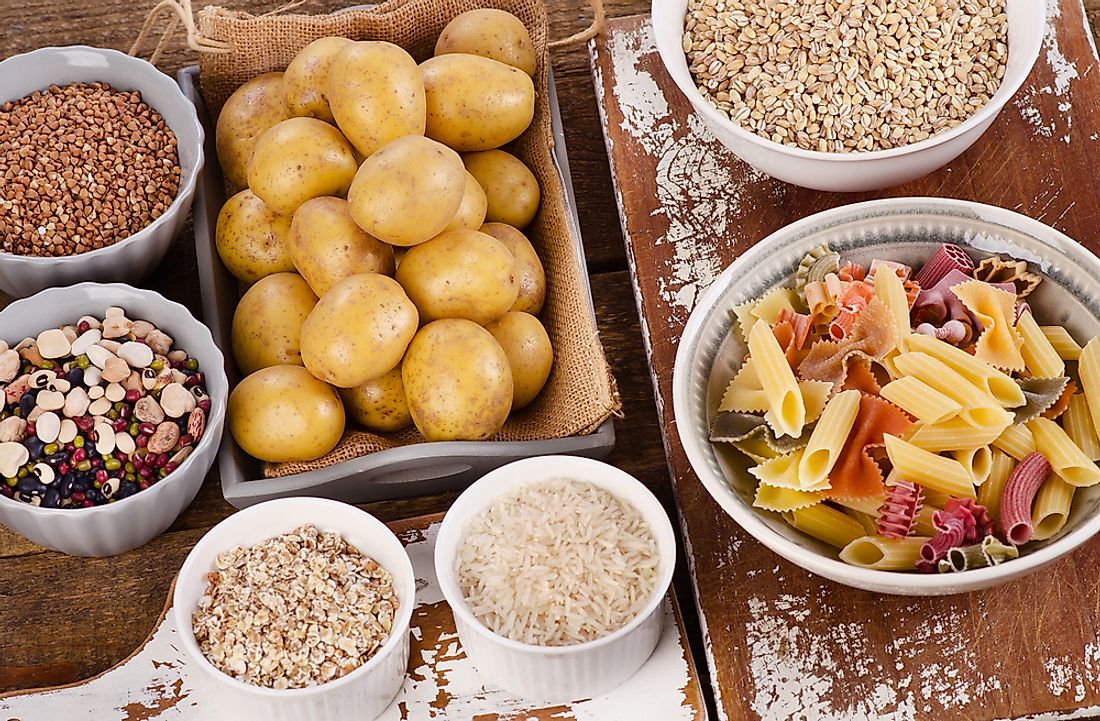 • Monosaccharides: Its name derived from the Greek word mono, meaning one or single, and sakcharon, meaning sugar, a monosaccharide is a basic “sugar unit” whose molecules cannot be broken down (by hydrolysis) into any simpler sugars. Monosaccharides are the smallest of carbohydrate molecules. The most common ones are glucose, fructose, and galactose.

Glucose is the ultimate, energy-giving breakdown product of all the carbohydrates we eat. It can go directly into the bloodstream.

• Disaccharides: Table sugar, sucrose, is a disaccharide (“two sugars”); its molecules are made up of one molecule each of glucose and fructose, the very sweet simple sugar found in fruits. When treated either with an acid or with the enzyme invertase, the sucrose molecule breaks down into a mixture of equal amounts of its glucose and fructose parts. The resulting mixture is called invert sugar and is, surprisingly, sweeter than sucrose itself because fructose is sweeter than sucrose.

This illustrates a fundamental principle of chemistry: A chemical compound (sucrose, for example) can have very different properties from a simple mixture of its components (a mixture of glucose and fructose, for example). The obligatory chemistry textbook example is sodium chloride (table salt), which we eat with impunity despite its being composed of a metal that explodes in water (sodium) and a poisonous gas (chlorine).

Other disaccharides are lactose, found only in the milk of mammals, and maltose, formed when grains are malted—soaked in water until they sprout, such as in making beer and Scotch whisky from barley.

• Oligosaccharides: Oligosaccharides, the name comes from the Greek oligos, meaning few, are carbohydrate molecules made up of fewer than ten monosaccharide units, and are still generally referred to as sugars rather than starches. The three and four-unit oligosaccharides raffinose and stachyose (note that the names of all sugars end in -ose) are present in beans but are not digestible by humans. Instead, bacteria in our intestines feed on them, showing their ingratitude by producing those gaseous consequences we associate with beans.

• Polysaccharides: Finally, there are polysaccharides (“many sugars”), also called complex carbohydrates or starches, whose molecules are made up of anywhere from about forty to thousands of glucose units. If the units are joined in long, rather straight chains, they are called amylose starches; if they are joined in a branching, bushy configuration, they are called amylopectin starches.