Why and How Do Wint O Green Life Savers Make Flashes of Light?

Your question may sound silly to those who haven’t heard about it before, but chomping on those little candies really does make flashes of light. It may not help you at all to know that the phenomenon is called triboluminescence, but there, I’ve said it and done my duty as a scientist.

Life Savers, it will not surprise you to know, are little more than donut-shaped crystals of sugar. Certain crystals, including cane sugar, have long been known to exhibit this property of tri … whatever. In fact, way back in 1605, the English philosopher Sir Francis Bacon (1561–1626) reported that when he chopped up blocks of sugar in the dark (sugar was sold in big blocks and candlelight was dim), he observed flashes of “a very vivid but exceedingly short-lived splendour.” Mineralogists have long known that certain mineral crystals also give off light when subjected to sudden shock. 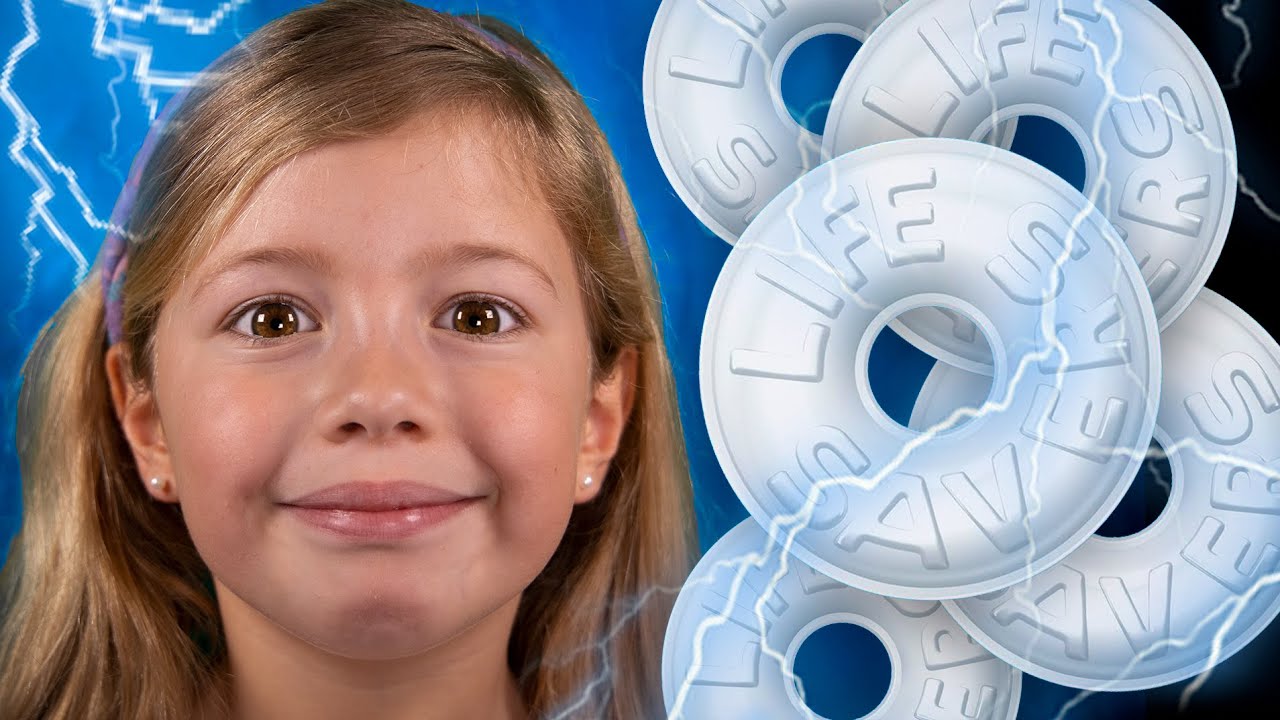 A crystal is an orderly, geometric arrangement of atoms, all bound together into a sort of three-dimensional lattice-work structure. Examples that you may be familiar with are sugar (sucrose), salt (sodium chloride), quartz (silica) and diamond (an overpriced form of carbon). It has been found that crystals whose molecular arrangements are not symmetrical, that is, whose molecules are not situated identically in two opposite directions,  are the best flashers.

When such a crystal is cracked open, the atoms are torn apart from one another and some of their electrons are torn off in the process. Crystal fragment A may wind up with more electrons than it deserves, while crystal fragment B may not have enough. As they begin to separate, the extra electrons on fragment A are attracted strongly back to where they belong, and they zap across the widening air gap between A and B, exactly like a bolt of lightning zapping through the air between a cloud and the ground.

These miniature lightning bolts make tiny blue flashes because the air’s molecules are energized by the swift rush of electrons through them, following which they throw off their extra energy in the form of light. Hard, fracturing whacks on the crystal can therefore produce weak flashes of light.

That’s all that happens in most triboluminescent crystals. But in the case of WintOGreen Life Savers, that’s not all that happens. There’s an almost instantaneous second step that makes the light much brighter.

Much of the “lightning” that the electron-zapped air gives off is invisible to humans; it is ultraviolet radiation, which is of higher energy than visible light. But WintOGreen Life Savers contain a chemical called methyl salicylate, also known as oil of wintergreen; it’s the flavor in the leaves of the wintergreen plant, a small, creeping evergreen sometimes known as teaberry. This chemical has the property of being fluorescent. That is, its molecules absorb the ultra-violet radiation and re-emit it as visible light. It’s that visible light that is mainly what you see when someone chomps a WintOGreen Life Saver in a dark closet.

Can’t wait to try it?

Take a roll of Wint-O-Green Life Savers into a dark closet with a hand mirror or a close friend. (If you’re already in the closet, so much the better.) Make sure the closet is completely dark; wait until nighttime and plug the crack under the door with a towel if necessary. Think pure thoughts for about ten minutes, while your eyes become thoroughly dark-adapted.

Now pop a Life Saver into your mouth and, in spite of what your mother taught you, quickly crunch it noisily between your teeth with your mouth open. Your mirror or your friend will see surprisingly bright flashes of light inside your mouth. Baby dragons are trained on Wint O Green Life Savers.

You may also want to play around with sugar cubes. In the closet, clash them glancingly against each other, as if striking a match. You’ll see the miniature lightning flashes, but they won’t be brightened by the fluorescence of wintergreen’s methyl salicylate.