Why Do Some Wine Bottles Have Corks Made of Plastic?

I asked the same question on a trip to Portugal and western Spain, where more than half of the world’s cork is grown, but I was unable to get a satisfactory answer. It was like asking a silkworm about polyester.

Back home, I learned why many wineries are switching to plastic stoppers. Yes, they’re more economical than top-grade natural corks, but it’s as much about technology as economics.

We all learned in school that cork grows on trees called cork oaks. After picturing thousands of tree-ripened corks hanging from the branches, we were disappointed to learn that corks are actually cut from the bark of the tree. 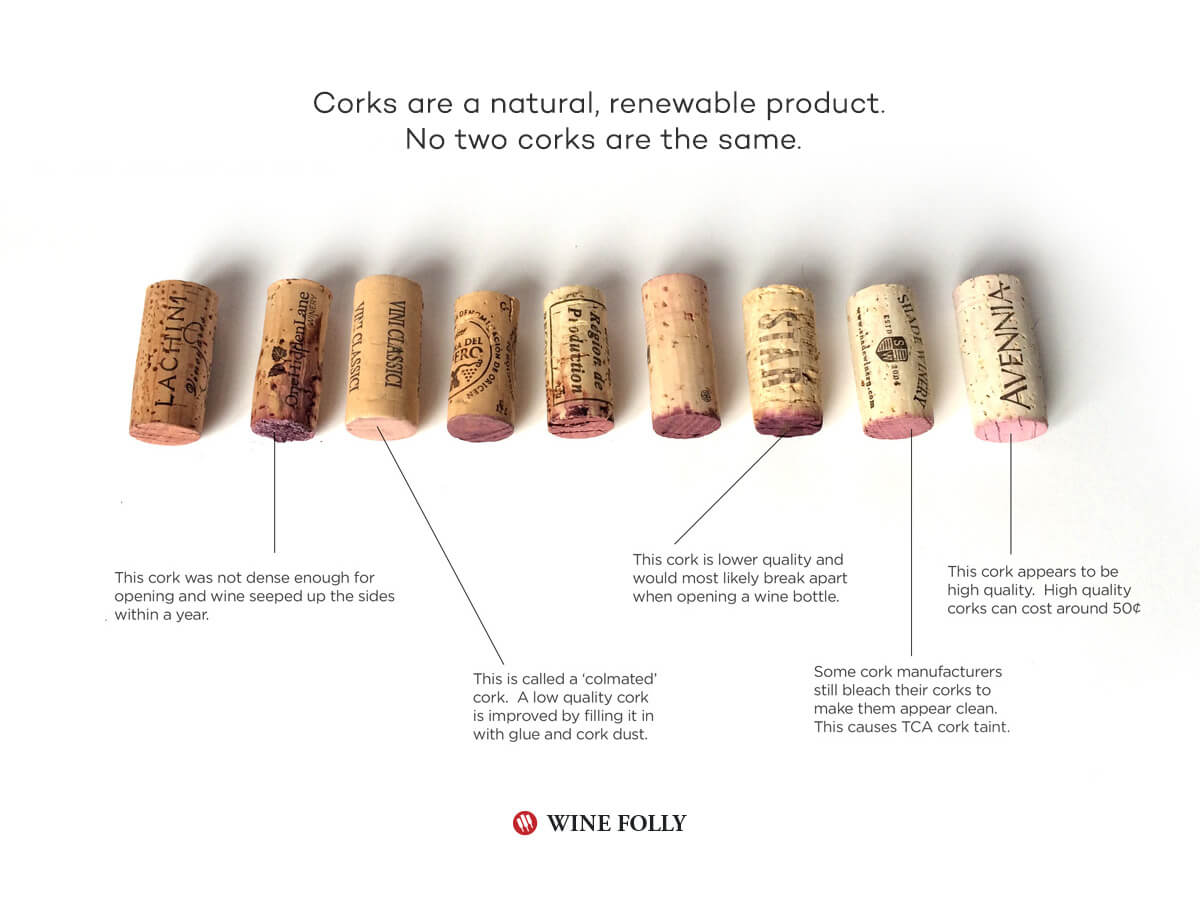 Cork oaks are the very model of a renewable resource, because once the trees have reached maturity, which takes twenty-five years, the bark grows back time and again after being stripped. This is done by scoring circles around the trunk and large branches, slitting the bark lengthwise, and peeling it off in sheets, which are then boiled in water, stacked, and flattened.

In the miles upon miles of cork oak groves that I saw in Portugal, each tree was marked in white paint with a big number, indicating the year in which its bark had last been stripped. It would be stripped again nine years from that date.

Looking at some freshly stripped bark, I was pleased to learn one thing that I had always wondered about: Is the bark really thick enough for the length of a wine cork? Yes, after nine years it is. The corks are punched out perpendicularly through the flattened sheets of bark like cutting tall, narrow cookies.

Throughout the hundreds of years that cork has been used to stopper wine bottles, there has been a nagging problem. Known as cork taint or wine taint, it is a musty smell from a mold that afflicts a small percentage of corks and affects the taste of the wine. Quality control in modern wineries, especially in the large ones, has lowered the chances that your bottle will be “corked” or “corky” to somewhere between 2 and 8 percent. Nevertheless, replacing the cork with a synthetic plastic is an attractive alternative, because mold won’t grow on plastic.

Here’s how the taint arises.

During the stripping, sorting, storage, and processing of the bark, there are many opportunities for molds to grow on it. The finished corks are usually treated with a chlorine solution to disinfect and bleach them. The chlorine doesn’t succeed in killing all the mold, however, and it has the side effect of producing chemicals called chlorophenols from natural phenolics in the cork.

The surviving molds, plus others that join them during long ocean voyages from Portugal to California, for example, are able to convert some of these chlorophenols into a powerfully odoriferous chemical called 2,4,6trichloroanisole, mercifully nicknamed TCA. It’s the TCA that makes wines taste and smell corky. It can be detected in concentrations of a few parts per trillion.

Plastic “corks” (synthetic closures, in the trade lingo) are now used to varying degrees by more than two hundred wineries worldwide. Companies such as Neocork and Nomacorc are turning out extruded polyethylene stoppers by the millions, while SupremeCorq makes its plastic stoppers by a molding process and takes the prize for creative spelling.

How do the synthetics compare with real corks? They seem to pass the tests for leakage, exclusion of oxygen, and printability, a requirement because many wineries use printing on the cork to carry marketing messages.

But because the synthetic closures haven’t been around long enough for long-term aging studies, most wineries are using them for wines that are meant to be drunk young,  within, say, six months of bottling, although Neocork says that its closures will hold up for as long as eighteen months.

But when connoisseurs pay more than a hundred dollars for a bottle of top-quality wine, they generally don’t want to see any new-fangled gimmicks. In an attempt to defuse any snobbishness, some wineries have been introducing plastic stoppers and even, would you believe?, screw-top closures on some of their top-of-the-line products. After all, an aluminum cap is probably the ideal closure; it’s airtight, never gets moldy, and can be removed without any tools.

What next? Mouton-Rothschild in a box?

Some wine bottles these days have synthetic “corks,” which may be made of a rather tough plastic that gives you and your corkscrew a hard time. Check the point on your corkscrew to see if it’s really sharp. If not, sharpen it up with a file and it will penetrate even the toughest of “corks” with ease.