Ones of the most prominent features of the walrus is its long tusks, which are elongated canine teeth. 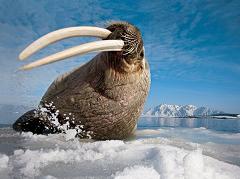 The tusks of a walrus are present in both males and females and can reach a length of over 3 feet and weigh up to 12 pounds.

Male walruses have slightly longer and thicker tusks, and use them for fighting, dominance and display.

The strongest male walruses dominate their social group, and usually have the largest tusks. Tusks also enable walruses to create holes in the ice and pull themselves out of the water onto an ice floe.

Biologists once believed that tusks were used to dig out prey from the seabed, but this has been proven false.

The tusks of a walrus are surrounded by a broad mat of stiff bristles called vibrissae, giving the walrus its characteristic appearance.

The vibrissae are attached to muscles and are supplied with blood and nerves making them a highly sensitive organ capable of differentiating shapes.

Walruses use these stiff but sensitive whiskers to help them find shellfish in murky arctic waters.

Mom walruses also use them, as well as the rounded part of their tusks, to massage and nuzzle their children lovingly.

Although walrus calves can swim within hours after birth, they stay with their mothers for two years, rapidly gaining size and insulating blubber from their mothers’ extremely fatty milk.

I am the walrus.