The ostrich, the largest bird in the world, does not hide its head in the sand. 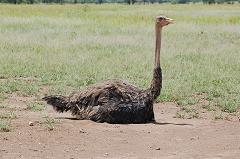 Although ostriches are not among the more intelligent species of animals, they are not stupid enough to hide their heads, thinking they cannot be seen.

Actually, ostriches have very keen eyesight, and they constantly watch what is going on. When they sight possible danger, they sometimes drop to the ground, stretch out their necks, and watch with their very good eyes.

This behavior may have given rise to the story. If danger comes too near, they can kick with their powerful legs or attack with their long, thick toenails.

The ostrich is the only bird with two toes on each foot. But those toes, the longest of which reaches 7 inches, can be dangerous weapons if lions or men, the ostrich’s two enemies, are near.

So while the ostrich doesn’t hide its head in the sand, it does do something else with that sand, it eats it! Eating sand helps the bird grind its food while digesting it.

Although the ostrich eats mainly plants, it will munch on turtles and lizards as a treat. Those plants, if they are juicy, also help the ostrich go for long periods of time without drinking water.

The male ostrich has a strange voice, giving off a deep roar like a lion’s, but with a hiss added to it!