Unlike many other birds, an owl has eyes at the front of its head instead of on the sides. 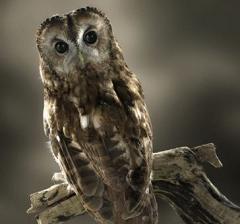 While this gives the owl excellent depth perception for hunting, it makes it hard for it to see to the back and sides of its body the way other birds can.

To compensate for this, evolution gave the owl the ability to pivot its head so it can check out stuff that’s happening on all sides.

Its head cannot turn all the way around-360 degrees, because that would cause its head to snap off.

But it can pivot its head 180 degrees in either direction, allowing it to scope out all of its area without having to turn its whole body in the process.

All the Better to See You with, My Dear.