“Preposterous!” scoffed American tycoon Russell Sage to the first proposal for an underground transit system in New York City. “The people of New York will never go into a hole in the ground to ride.”

Well, as everyone knows, Russell’s counsel turned out to be less than sage. By the time of his death in 1906, subway cars were already rattling through Manhattan’s first tunnel, with work proceeding on new lines in three boroughs. And every year, close to two billion people “go into a hole to ride” in New York City.

Though New York’s subway is today the world’s most famous, or infamous, it was not, as many people believe, the first ever constructed. Actually, it was the sixth to begin operation, and the second in this country. For the world’s first underground rapid transit system we must journey to Londontown. 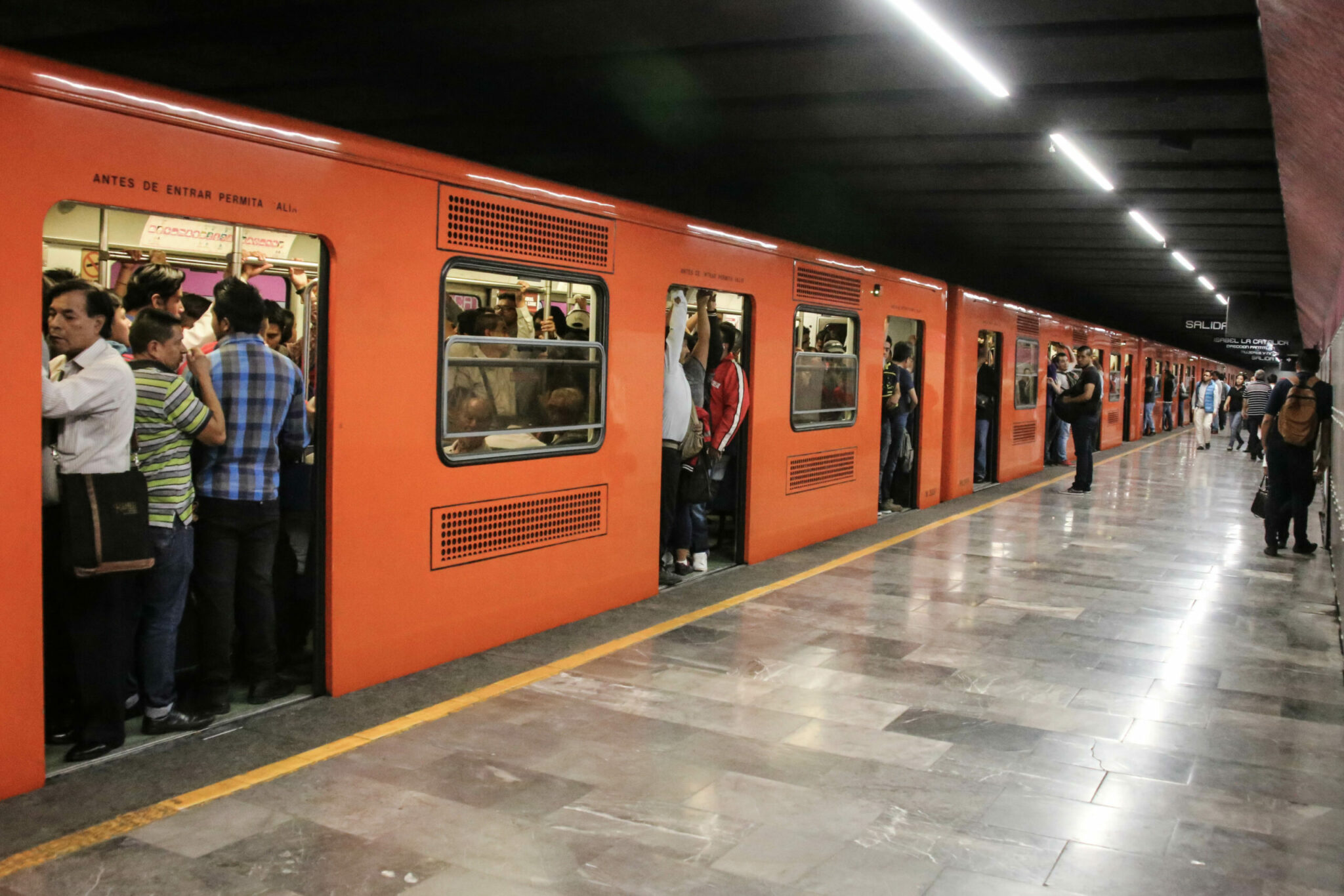 By the mid-nineteenth century, a traveler could ride by train from London’s rail terminals to almost any point in England. But travel within the city itself still relied chiefly on horse-drawn streetcars and carriages. The rail lines that brought travelers to London did not reach into the city’s main business and commercial center, and since the railroads and terminals were for the most part constructed by rival rail companies, there was no convenient means of transit between one depot and another.

Shortly after the opening of Marc Brunei’s Thames Tunnel in 1843 had demonstrated the viability of underground rail travel, London city solicitor Charles Pearson proposed an underground railway connecting some of the city’s major railroad depots. After ten years of talk, Parliament authorized the first line: a three-and-a-quarter-mile run between Paddington Station and Farringdon Road, by way of King’s Cross Station.

Construction was of the “cut and cover” method still used for the great majority of lines: first, a trench is dug in the street, tracks are laid at the bottom of the trench; then the trench is covered by the reconstructed street.

After three years of construction, London’s first line opened on January 10, 1863. It was powered by steam locomotives fueled by coke. Despite the sulfurous smoke spewed into the tunnel by the locomotives, the “underground” was an immediate success, attracting 30,000 riders on its first day of operation, and well over 9 million during its first year.

To appreciate the English feat, remember that with a comparatively limited technology, the builders of the first subway had completed in less than three years a project that even today would require years of effort. And this despite a flood that at one point filled the excavation to a depth of ten feet! Today, the London Underground is over 100 years old, but is still in excellent condition.

This line, called the “Metropolitan,” was gradually lengthened over the following decades, and remained the only subway in the world for close to thirty years. But 1890 saw the opening of London’s second underground line, and the first “tube tunnel” in the world. In a tube line, a tunnel is actually bored through the ground, under the building foundations.

The 1890 tube line was immediately popular, with electric power freeing the deep tunnels of noxious fumes. A trip on the three- mile line cost two pence, but the fare bought little in the way of a view. Subway cars of the time were built without windows, since in the opinion of their designers, there was simply nothing to look at in a tunnel.

On a tube line, the stations must be located far underground. The greatest depth of the London system is 221 feet, but no station is more than 100 feet underground. Thus dozens of elevators, or “lifts” as they’re called in England, are needed to carry passengers between the street and the tube platform, not the most efficient way to keep people on the move, considering there might be a ten- minute wait for a rush-hour lift.

At one time, there were 240 lifts throughout the London underground system, but with the invention of a satisfactory escalator in 1911, the number of lifts began to dwindle. One escalator can do the work of five elevators, eliminating the waiting lines that plagued the earliest London tubes. Today, there are less than 100 lifts in operation in the London subway system.

On the other side of the Atlantic, the streetcar and the elevated railway were the favored forms of urban transportation until the turn of the century. The nation’s first elevated line, or “El,” had opened on Manhattan’s Ninth Avenue in 1867, with a cable-drive system. In 1871, there was a switch to steam locomotives. The nation’s first electric El did not appear until 1895, in Chicago.

While New Yorkers were debating the pros and cons of an underground system like the one then operating in London, Boston rushed ahead with the nation’s first subway. Completed in 1897, the Boston line initially ran one-and-a-half miles under Tremont Street, with trolley cars the first vehicles to ride the subway tracks.

By that time, New York had an intricate system of elevated lines. An underground line was thought to be impractical for the Big Apple, because of the hard granite rock that forms most of Manhattan Island.

As plans were put forward for the first underground line in the city, skeptics like Russell Sage warned that the project would prove a disaster. Property owners claimed that their buildings would collapse. The city’s water board expressed fears that construction would destroy the underground water pipe system.

But the subway proponents held sway; and in 1904, the first New York subway began operation, without the collapse of any thing at all. The line ran from City Hall in Downtown Manhattan to the Grand Central Terminal in Midtown, then west to Times Square and then north to 145th Street. Another line was added almost immediately, extending to 180th Street in the Bronx; but it took until 1908 for the subway to touch the shores of Brooklyn.

The London system was and still is called the underground, but American rapid transit pioneers had to search for an alternative term. “Underground Railroad” to most Americans suggested the network of secret way-stations that brought escaped slaves North before the Civil War; so the word subway was born of necessity.

The first New York subway lines, like their London counterparts, were built by competing companies, and remained privately owned until the city took over in 1940. The IRT (Interborough Rapid Transit) was the first rapid transit company in the city, operating the maiden line from City Hall and most of the Manhattan and Bronx elevated lines. The BMT (Brooklyhn and Manhattan Transit) was constructed from 1913 to 1920, and included most of the Brooklyn elevated lines. Oddly enough, the Independent Line (IND) was the only line never to be independently owned, built by the city in the 1930’s.

We mentioned that the New York City system was the world’s sixth underground railway, with London and Boston two of its predecessors. The other three? Well, the Glasgow subway was the second to be completed, opening in 1891. The Scottish line, still in operation, runs over a six-and-a-half-mile oval that never reaches the surface. Only one other subway line in the world never reaches daylight: London’s Waterloo and City. On both lines, cars have to be lifted by elevator to repair shops and sidings.

In 1896, Budapest opened the first subway on the European continent, running single cars over a two-and-a-half-mile electric line. In 1900, Paris opened its first metro, the world’s fifth, a six-and-a-quarter-mile line.

Philadelphia was the third American city to build a subway, opening its first line in 1907. Chicago, which already had a large el network, was to wait until 1943 for its first underground. Subways were opened in Buenos Aires in 1913, in Tokyo in 1927, in Moscow in the 1930’s, and in Toronto in 1954.

At present, there are sixty-seven cities operating underground rail lines of some kind. In addition to those already mentioned, there are underground transit lines in Madrid, Barcelona, Oslo, Rotterdam, Stockholm, Hamburg, Berlin, Lisbon, Milan, Rome, Kiev, and Leningrad in Europe; Osaka, Kyoto, and Nagoya in Asia; Sydney in Australia; and Mexico City and Montreal in North America.

Construction proceeded on subway lines in a number of cities, including additions to the New York, London, and Paris systems. New systems were planned for Prague, Munich, Cologne, Cairo, Helsinki, Kharkov, and other cities in the early 1980s. In America, San Francisco and Washington, D.C. have recently installed subways and Atlanta followed suit in the 1980’s.

By the way, recent work on a new subway line in Rome has produced some unexpected benefits: excavators have discovered extensive underground ruins dating from the days of the Roman Empire. Most finds have been removed and placed on exhibit at the Termini Station.

The New York system is shorter in track mileage, but far and away the busiest in the world, serving about four-and-a-half million passengers on an average weekday and over two billion a year. This massive system, one of the few to remain in operation around the clock, spans 230 miles, with 462 stations, and its 134 miles of tunnel form the largest underground network in the world.

The Paris Metro is 105 miles long, less than half of the London system, yet the Paris system attracts nearly twice as many passengers, over a billion each year. Some 270 closely spaced stations leave no point in the central area of the city more than 600 yards from the Metro!

Modern subway cars have come a long way from the early English windowless models. Those being built in America are for the most part sleek and air-conditioned, and much quieter than their forerunners. Subway stations, too, are now more imaginatively designed. In the Montreal subway, for example, an artist was commissioned to design each station, while the stations of the Moscow subway are marvels, bedecked with marble columns and elegant chandeliers.

And speaking of modern innovations, the first subway line to operate automatically without conductor or motorman began operation in New York in 1962, running between Grand Central Station and Times Square. But the city’s Transit Worker’s Union won a demand to place a nonfunctional motorman in each train; and today, the line is run manually, like the city’s other lines. Since 1963, an automatic line has been in operation in London, running four miles between Woodford and Hainault. The San Francisco system is largely automated.

But long after the last engineers and conductors have given way to automation, the underground enthusiast will still be around to pass along subway lore. One subway buff set a record in 1968 by visiting every station in the London system in just fifteen hours! Five years later, two other determined individuals established the New York record by traveling to each of the 462 stations in just 21 hours, 8 1/4 minutes. It takes some people almost as long just to decipher the New York system’s maps!