How Did the Aardvark Get its Name, What Does it Mean in Dutch, and is it Related to the Groundhog?

The Aardvark, also known by its scientific name Orycteropus afer, is a medium-sized, burrowing, nocturnal mammal native to Africa.

It is the only living species of all Tubulidentata, and is sometimes called “antbear”, “anteater”, “Cape anteater”, or “earth hog”.

The name aardvark comes from the Dutch words “aarde”, meaning “earth”, and “varken”, which means “pig”, and it translated as “earth pig”. 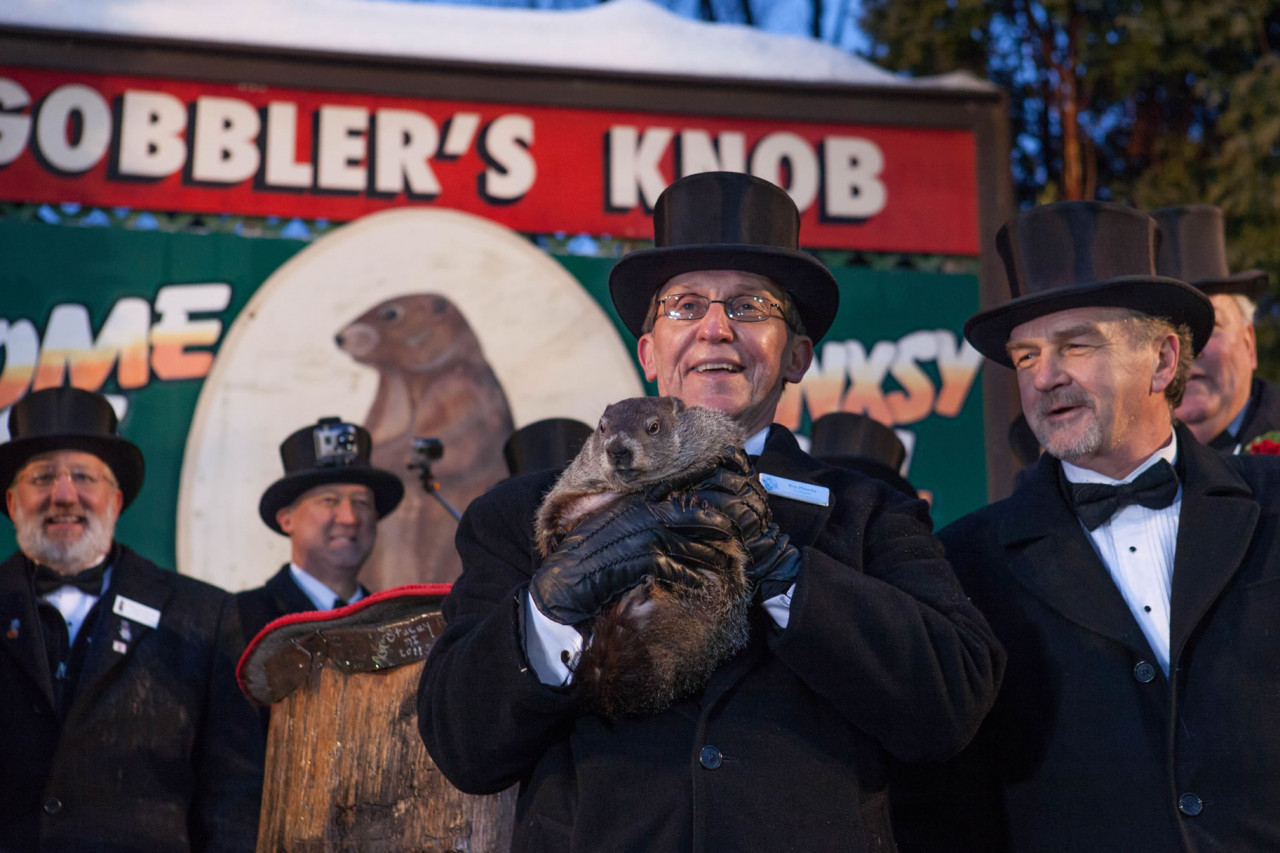 It is believed early settlers from Europe thought it resembled a domesticated pig, although the aardvark is not closely related to the pig.

We can safely say that the aardvark and groundhog are not related, but thanks to a bunch of little-educated Dutch people who were in a position to give ill-informed names to animals, that’s not entirely accurate.

It turns out that the names of the two animals are very much related, dank je wel to those Dutch folks.

When Dutch settlers saw the aardvark in South Africa, they somehow decided that the hole-dwelling animal looked like a pig, so they called it aardvark, or “earth pig”.

When they saw a woodchuck in America, they somehow thought that the weird little marmot also looked like a pig, or maybe they thought it looked like an aardvark. Either way, they decided to call it an aardvark, too.

Eventually, they and the Germans incorporated the animal into a weird ceremony they had performed back in the old country, having to do with whether the animal saw its shadow on Candlemas Day, on February 2.

English speakers in the United States translated the name of the American aardvark into “groundhog.”

Unfortunately, some English speakers in South Africa did exactly the same thing in their country as well, they started calling the African aardvark a groundhog, and sometimes, a ground pig.

After more confusion regarding the two animals ensued, practicality prevailed, and most English-speakers now use aardvark only for the African animal and groundhog only for the American woodchuck, and usually only then in February, calling it a woodchuck the rest of the year.

Confused yet? The animals are not related; their names are related only because those pesky Dutch couldn’t tell a pigpen from a hole in the ground. Good.

Then let’s not get into why the aardvark is also sometimes called the ant bear and the Cape anteater.

We figure that if you’ve got a cool name like aardvark getting you into the front of dictionaries, you should probably just stick with it.

How Much Ground Would a Groundhog Hog?

How Did the Aardvark Get Its Name?

The Aardvark was named after the time it was first spotted by European people living in South Africa and America. Dutch settlers thought the woodchuck looked similar to the Aardvark, which is the reason they called it that. The woodchuck was also part of a bizarre ceremony that was observed in the old country of Candlemas Day. These days, the name is used in many contexts. This article will provide more details about this amazing mammal.

One of the most fascinating African mammals is the Aardvark. This mammal is related to the African elephant. It has a strong sense of smell, due to its short legs and long ears. The aardvark has five feet which include the molars on its rear foot. Their nails are flattened and shovel-like , and do not have an enamel coating.

They are nocturnal, solitary creatures and eat termites and ants primarily. The only fruits they eat are aardvark cukes. They rarely eat any other animals or are kept in zoos. They aren’t widely cultivated because they aren’t common. If you’d like to experience one in the wild, think about a visit to the local Zoo.

The aardvark, an African mammal, can weigh up to up to 88 pounds. Its scientific name is Orycteropus afer. They can be found in different habitats across Africa and spend the day in burrows where they feed on ants. Their burrows also provide habitats for African wild dogs. Aardvarks don’t pose a threat to humans, but they are essential to the ecosystem.

Aardvarks are classified as not of concern by the IUCN. Although their numbers are still quite small The species has been affected by habitat loss. This is due to human-caused deforestation, urban expansion, and other causes. They are now considered a endangered mammal due to no enough information to determine their numbers. It is hard to determine how many of these species remain due to their elusive nature.

Aardvarks are found in sub-Saharan Africa. They require good soil conditions for digging their burrows. They can dig in clay, sandy, and even rockier soils. If the soil is too poor, the aardvark will move to a better spot. Their burrows can be as long as 10 meters and their ranges could be anywhere from up to five kilometers in size.

The Aardvark is an expert digger

The Aardvark is a medium-sized burrowing mammal that is native to sub-Saharan Africa. Its ears and snout are like pigs’ ears. It is able to dig deeper than a human group using shovels. In Afrikaans the word is used to describe it as an “earth pig.” Its short snout and its long, curved tongue make it a skilled digger.

An Aardvark is a mammal of medium size digs holes with its large claws on the front. The night-time animal is found in Africa and is the only living member of the Tubulidentata family. They eat termites and ants, but their name is not accurate, because they’re not related to pigs or the South American anteater.

Aardvarks live in the Sub-Saharan region and can be found in savannas, forests and even deserts. They are known to burrow in darkness, but also come out at night to look for food. The Aardvark is colorblind and has poor vision. However, it can still use its nose to find food.

Aardvarks are the closest living related to an African elephant. It is a medium-sized mammal which is a bit like a pig. Its ears are flat and long, and can be folded to prevent dirt entry. The Aardvark is almost completely hairless. The burrows of Aardvarks can be 10m in depth and cover a distance of 1.2-3.1 miles (2-5 km).

Aardvarks are excellent swimmers. Some species can swim in strong currents. Although it is slow, the aardvark can dig a mile-long tunnel within five minutes. This makes it a popular animal in comics and other forms of media. This article requires additional citations to verify. Unsourced material may be challenged and removed.

Aardvarks are found in sub-Saharan Africa . They are rodents that sleep at night. They are found in grasslands as well as other areas with soft, moist ground. They stay clear of forested and rocky areas. The poor eyesight of the aardvark implies that they could be in danger areas. This is why it’s essential to watch the ability of the aardvark to swim.

Aardvarks are polygynous and mate with several females. The gestation period is seven months long and the female can give birth to one offspring at a time. The young aardvark is born hairless and pink. It stays in the burrow for approximately two weeks before venturing out to join its mother. Aardvarks begin eating solid food at the age of three months. They’re fully independent at six months, and they become sexually mature at 2 years of age.

Swimming is the most significant benefit of the aardvark. It is one of the most adaptable animals due to its remarkable swimming abilities. It is a stunning pet due to its extraordinary swimming abilities. As it swims, an aardvark is able to keep up with other animals. It can also stay underwater for extended periods of time which makes it a popular pet for children. Adopting an aardvark as your pet will allow you to take advantage of its swimming capabilities.

The Aardvark is a mammal that is odorless

An odorless mammal with an enormous, prehensile tail, the aardvark is an excellent candidate for an animal companion. Aardvarks are roughly the size of a small pig, and their bodies are covered in thick fur. Their long tongues, up to 12 inches, are used to dig holes. Their ears grow to 9.5 inches.

Aardvarks are generally nocturnal and their range extends to bushland, grasslands, and savannas. They are prevalent in sub-Saharan Africa , but are also found in Europe. They prefer areas with a lot of termites and ants. They aren’t frequently seen and their population size can be difficult to determine. While the population of southern Africa appears to be stable, their natural population cycles are initiated when their environment changes.

Aardvarks have poor eyesight, however their phenomenal sense of smell makes up for the loss of sight. Their olfactory turbinal bones, that cover the nasal cavity, are the largest of any mammal. In addition to their exceptional sense of smell, aardvarks are exceptionally adept in hearing. Because they are largely silent they depend on their keen hearing to identify prey and avoid predators.

The aardvark is known for a long time as coexisting with humans. Dutch colonists in South Africa in the middle 17th century probably gave the aardvark its modern name. The mammal was likely called differently by the tribes of the southern African region. Aardvarks are also called the cape anteater as well as the African Ant Bear. They are located at the beginning of almost every A-Z children’s animal book.

The Aardvark is an excellent insect hunt. Although it has poor eyesight, it has an acute sense of smell and a great hearing range. It is also known as the ant bear because it makes use of its long tongue, sticky to pick up insects. They are found in sub-Saharan Africa and Madagascar. Aardvarks aren’t aggressive or dangerous, but can attack larger predators, such as birds.

The aardvark can be seen in a variety of habitats. The distribution of the ant species dictates their presence in certain areas. They prefer soft soil and avoid rocky or muddy areas. They are part of the Xenarthra family. They are considered the only living representative of the Tubulidentata order. They are the closest living relatives of elephants, hyraxes, and Tenrecs.

The aardvark is an incredibly large mammal, sporting a long, pig-like snout and ears that are slightly shorter than the body of a porcine. Their snouts are very long, and their skin is thick to stop insects from entering their bodies. Their teeth are constructed of hexagonal prisms of Dentine and they do not have canines or incisors. Their tongues are small and curving at the sides so that the animal can grind food before swallowing whole.

Aardvarks are nocturnal, solitary mammals that spend the daytime in burrows. They return at night to hunt for food. Aardvarks may have up to three burrows. They can utilize their burrows to protect themselves. Their burrows are also used as shelters for animals of many species. The burrows are utilized by both insects and mammals as a safe place for their children.