The word zoo is short for zoological garden, and is a facility in which animals are displayed to the public in enclosures, and often bred. 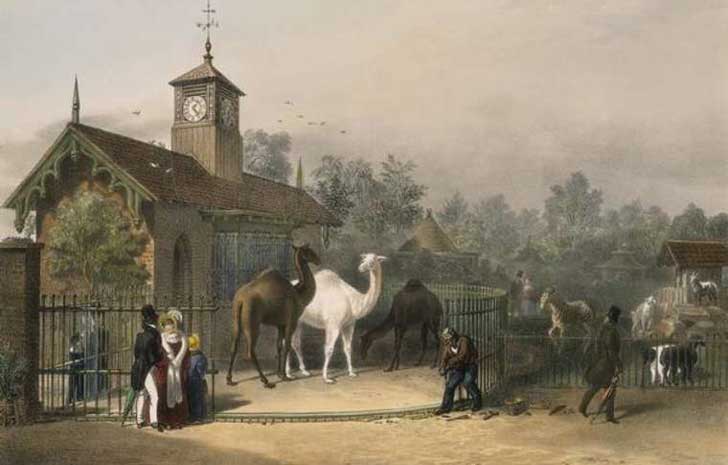 Since ancient history, it was common for rulers to have collections of exotic animals in their castles, but that wasn’t exactly a zoo.

Same thing for the gladiator fights of ancient Rome, for which exotic animals from around the world were brought to be slaughtered for the amusement of the masses.

For our purpose, we’ll say a zoo is a location that displays live animals for the purpose of public viewing and, with any luck, preservation and education.

Given that, the first real zoo was probably the Imperial Menagerie in Vienna, established for the royalty in 1752 and opened to the public thirteen years later.

It started a fad in Europe: the zoo at the Jardin de Plantes, Botanical Garden, of Paris opened in 1793, and the zoo of Regent’s Park, London, in 1828.

In the United States, sea captains began transporting wild animals for display in the Americas as early as 1721, when the first camel and African lion arrived in Boston. The first polar bear arrived in 1733, the first orangutan and tiger in 1789, the first ostrich in 1794, and the first elephant in 1796.

A near-zoo consisting of a permanent exhibit of live and stuffed wild animals first opened on New York’s Wall Street in 1789, long before the bulls and bears took over the area.

But the first real American zoo, in Chicago’s Lincoln Park, didn’t open until 1868.

The morning zoo after.