How Does a Firefly Make Its Light?

Sitting outside on summer evenings, you may have wondered how fireflies make those bright little flashes of light.

To begin with, the firefly is not a fly, it is a beetle. And inside that beetle’s stomach are five chemicals.

When oxygen enters the firefly’s body, it stimulates a nerve reaction which causes those five chemicals to combine. This turns the light on. Several seconds later, another chemical combines with the others and turns the light off. 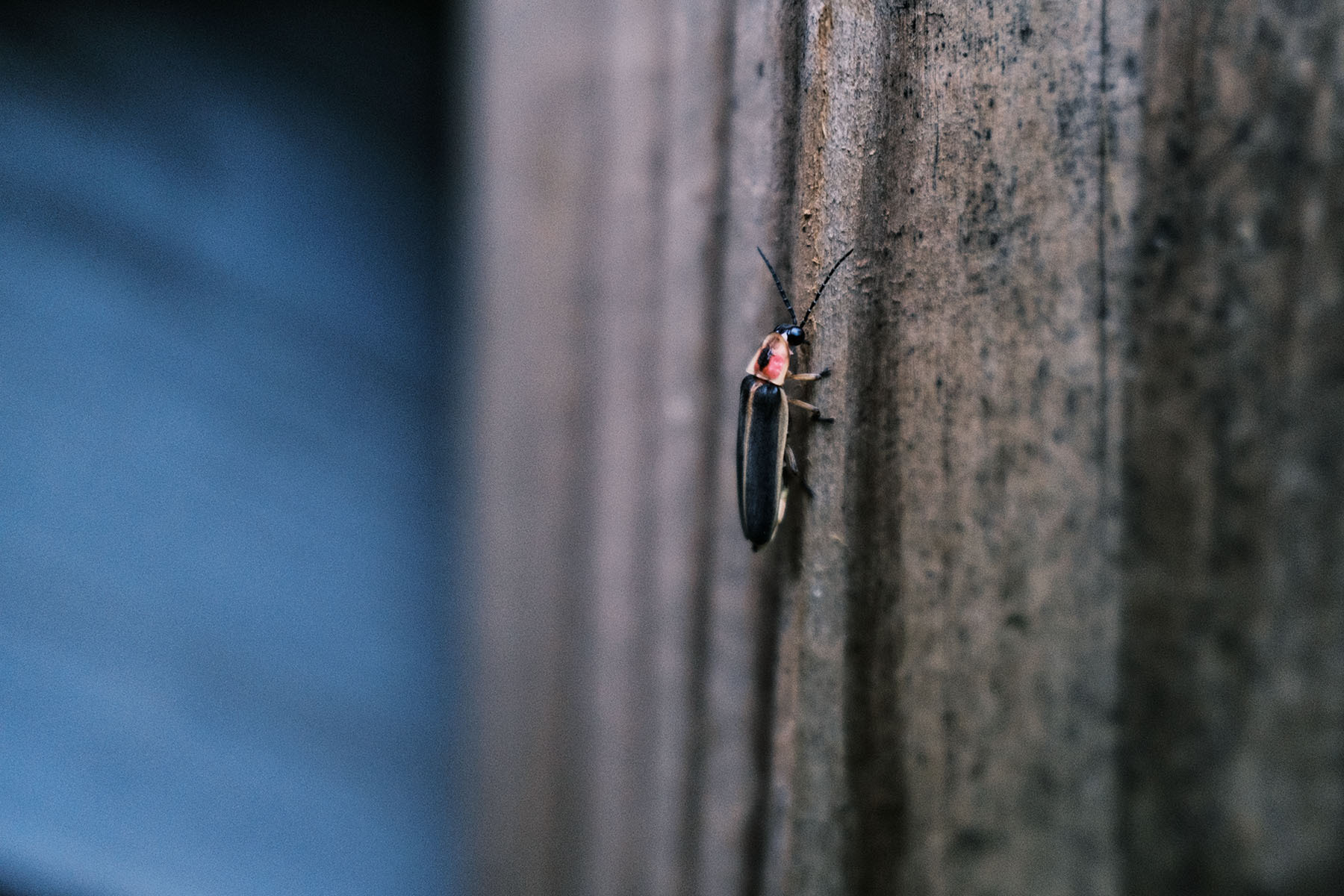 Fireflies use their flashing lights as a mating signal. The male flies about at night, flashing his light. The female usually waits in the grass for the male’s signal, then answers him by flashing her own light.

Can you imagine, Men traveling through dense tropical forests often collect fireflies in jars and use them as lanterns, while women in Cuba and other tropical countries pin live fireflies on their gowns or hang them around their necks on chains as decorations.

How Do Fireflies Glow?

The organ responsible for lighting is called the lantern. It looks like a series of tubes that resemble branches of trees that have morphed into twigs. The tubes carry oxygen to the cells of the lantern that contain luciferase. This chemical creates light. The lantern is so complicated that scientists have had trouble investigating it in depth and reproducing it for technological applications.

A gene known as luciferase is responsible for a chemical reaction that produces light. Scientists have employed the enzyme to study the production of ATP in cells and other chemical reactions. Researchers have also been able to put the gene that codes for this enzyme in the genes of other organisms. This allows researchers to determine the amount of protein is needed to create light. This article will go over the numerous uses of luciferase in research.

Although fireflies are not model organisms but they are a great illustration of bioluminescent click-beetles. Luciferase has been used by many scientists in their research. This could be of benefit to the human race. They also have used the enzyme to conduct biomedical research as well as to detect food products that are contaminated. Currently, researchers have many ways to utilize the enzyme, and some even use it to create synthetic luciferase.

Researchers have been using luciferase for decades to study the process by which insects create their illumination. Insect fireflies as well as other luminous microorganisms possess luciferase genes which originated from luciferases that were found in the ancient. The amino acid sequence of these luciferases from the past was compared to that of their modern counterparts, which allowed them classify proteins based on their evolutionary relationships.

ATP, magnesium ion and luciferin are the primary components of the chemical responsible for giving fireflies their luminescence. The light wavelength of fireflies is a range of green (510nm) to red (660nm). The chemical luciferin was isolated from more than 10,000 fireflies in Japan in the year 1960 by scientists B. Bitler and W. D. McElroy. The chemical was later synthesized by E. H. White.

The process of light emission is a complex. In the end, luciferin is destroyed by an enzyme known as luciferase, which catalyzes a series of complicated reactions that involve ATP molecules and magnesium ions. Researchers have proposed that fireflies utilize the size of a cavity within the luciferase protein to create different colors of light that range from red with lower energy to more energetic green and yellow.

This process utilizes the luciferin protein, that is made by a seed shrimp. The protein is then combined to produce the light fireflies emit. Fireflies are able to produce light even in the dark due to the way these proteins function. These creatures produce light that is significantly cooler than the light of animals and plants. However less than 20% of the bioluminescent light comes from thermal radiation, which is what makes it glow.

The human heart, which produces the gas nitric dioxide that regulates blood pressure and heart pumping, was the first clue as to how fireflies light up. A group of scientists comprising an evolutionary ecologist, a neurobiologist and a neurobiologist analyzed the behavior of fireflies to learn more about this bioluminescent mole. The researchers found that when fireflies are exposed NO, their lanterns begin to glow and their bodies stop using oxygen which is important for producing energy.

Fireflies come in a variety of light, and nitric oxide is among the most common kinds. Many animals emit light, including bacteria, jellyfish and fish. They are sometimes referred to as phosphorescent swells and are usually observed floating on the surface. However, some fish make use of their lights to lure prey in their mouths. Michel and Lewis disagree, arguing that nitric dioxide isn’t involved in their lighting systems.

Additionally the mitochondria in fireflies have been proven to function as buffers for oxygen that can flow freely through the light organ. The proteins luciferin or luciferase that are found in fireflies’ lights organs release light. The reaction between oxygen and the proteins found in the light organ creates cold light, a type of light that is not heated and allows fireflies to produce light without burning up.

A major component of bioluminescent organisms is the presence of the protein Luciferin. Although this protein is present in various bioluminescent species however, its name is Latin in origin and is not associated with the devil. Luciferin is sensitive to oxygen and light, so it should be stored in a sealed container. However, it is possible to prepare a luciferin solution at 4 degrees Celsius and use it immediately.

Luciferin’s role in attracting a partner

Bioluminescence is a typical function in animals and confers many visual-related functions. A group of pigments known as Luciferins is responsible for the bioluminescent process. A majority of them emit light when they are enzymatically activated. In fungi and bacteria the biochemical pathway that luciferin biosynthesis was mapped. Fungal luciferase is also an important enzyme in the biosynthetic process. It is a biosynthetic cycling from caffeic acid. A strain that has the identified gene, luciferase-3H was cultivated in standard media and eventually identified as autoluminescent.

Bioluminescence is an intricate process that involves a variety of factors. One of them is the bioluminescent pigment Luciferin. It can be produced by a variety of marine organisms. Luciferin is a major component of bioluminescent activity. It helps attract and repel prey. Luciferin can also serve as a warning to predators and a deterrent as luciferin has toxic properties.

Luciferin is a key component of the mouse brain. When a firefly releases luciferin, it emits light, which allows researchers to observe brain tumor growth in mice. Bioluminescent imaging is used to track the growth and progression of tumors in mice. Luciferin is so efficient that scientists were able use it to accomplish this. However, this method is only suitable for imaging very small concentrations of luciferin in living organisms.

Jim Anderson, a student at Imperial College studied under Professor S. V. Ley FRS. He then pursued postdoctoral research at Harvard University. Anderson began his independent career at Sheffield University in 1993, after he returned to the UK. In 1999, he moved to the University of Nottingham, and in 2009, he relocated to the University of London. His research focuses on the asymmetric reaction method and its application to the rational design of red shifted luciferins. He also created an infraluciferin protein that resembles the yellow light of an infrared flashlight.

The discovery of luciferin was a breakthrough for scientists who were studying bivalve mollusks as well as click beetles. Researchers discovered that bioluminescent fungi produce green-blue light by burning their own luciferin with an enzyme known as Luciferase. In the early 21st century Yampolsky and his colleagues discovered a new luciferin, the first to be found in the fungal plant sphere.

Dinoflagellate scintillons also contain Luciferin. A protein called a Luciferin-binding Protein (LBP) protects luciferin against the oxidation caused by the luciferase. While the luciferase and luciferin binding protein are very similar however their evolutionary roots remain undetermined. However, there is a structural resemblance between dinoflagellate and metazoan luciferases, which suggests that they may have originated from the same evolutionary lineage.

Fireflies use flashes as mating signals. A male firefly will flash a specific pattern to attract females and the female will respond by flashing back. Each species has its own flash pattern to identify which mate is suitable. If everything is in order both females and males will eventually mate. Here are a few things you should be aware of about fireflies. Learn more about the way fireflies communicate via flashes.

Adult fireflies aren’t luminous, but they utilize pheromones in order to attract mates. This is the earliest form of fireflies. Luminous signals were only recently developed. Some species actually use both luminous and pheromonal signals, which suggests that they are evolutionarily intermediate in their communication systems. This is not an entirely transparent explanation.

The flashes of fireflies have different colors. They can vary from green to orange. Different colors make them more difficult to identify than other. A firefly could produce as much as eighty percent of its energy and can distinguish up to 100 different fireflies based on their flash patterns. It is interesting to note that fireflies do not consume food during their three weeks of existence however, they do eat during their larval stage.