Flying squirrels are nocturnal mammals that have fluffy tails that helps stabilize it in flight, and are native to North America and Europe. 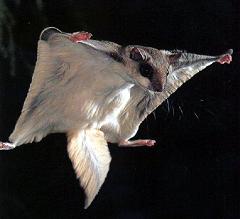 Flying squirrels don’t really fly, they glide or drift like a hang glider between trees.

The flying squirrel does this by using a fold of skin on each side of its body that’s connected to its front and back legs.

Leaping from a tree branch and stretching out its legs allows the folds of skin to become “wings” of sorts, but more like those of an airplane than a bird.

A flying squirrel steers by using its flat, wide tail as a rudder and stabilizer.

Its flight path begins with a sudden downward glide to pick up speed, then levels off, and finally makes a quick upward dart to slow down before landing.

It’s a skill that doesn’t seem to require much practice: by the time they are six weeks old, young flying squirrels can fly on their own.

Cue the Theme from Rocky.