What is Musk, What Animal Does Musk Come From, and What is Musk Used For?

Musk has been used in perfumes since ancient times, both for its own smell and as an oily base that, when mixed with more volatile scents, slows their evaporation. 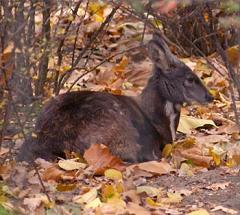 It’s quite strange that it has appeared in so many women’s perfumes, since it’s a male sexual scent, but that may just go to show that women buy scents they like, not necessarily ones the men in their lives find attractive.

The word Musk comes from “muschka”, the Sanskrit word for testicle.

However, the scent doesn’t really come from an animal’s testicles.

Despite the many plants and animals that have musk in their name and natural odor, the musk used in perfumes comes from only one animal, the musk deer of Asia.

The musk itself comes from a gland in the abdomen; to harvest it requires killing the musk deer and cutting open its belly. Luckily for the musk deer, scientists developed a synthetic musk in 1937 that has largely replaced natural musk in cosmetics.

Unluckily, the deer is still being killed in large numbers because of an Asian superstition that its musk gland is an aphrodisiac.

We do what we musk.

What plant or animal does musk perfume come from, the muskmelon, the muskrat, the musk ox, or what?