How Does a Radiometer (Light-Mill) Work and Who Invented It?

A radiometer (also known as a light mill, light windmill, or roentgenometer) is generally supposed to illustrate that light has pressure. But they don’t. If a machine could be a con artist, this gadget would take the cake. 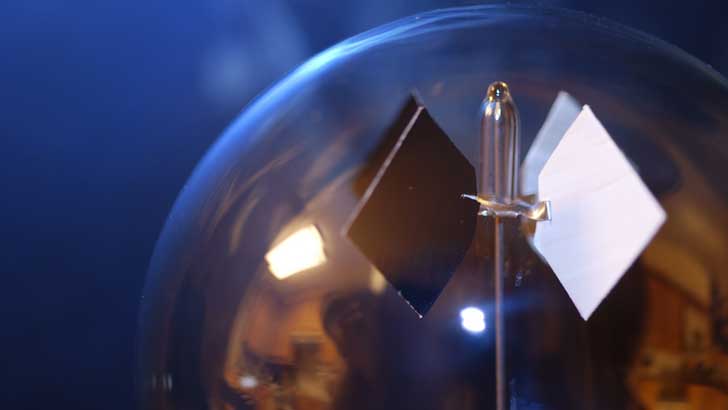 You’ve seen them. They look like a light bulb on a stand. Inside the bulb, which has had most of the air pumped out, are four thin, metal vanes, mounted like a pinwheel on a low-friction pivot. One side of each vane is shiny (or sometimes white), while the other side is black. The shiny side of one vane faces the black side of the next, and so on. When exposed to sunlight, the vanes spin merrily around, away from their black sides and in the direction of their shiny sides. 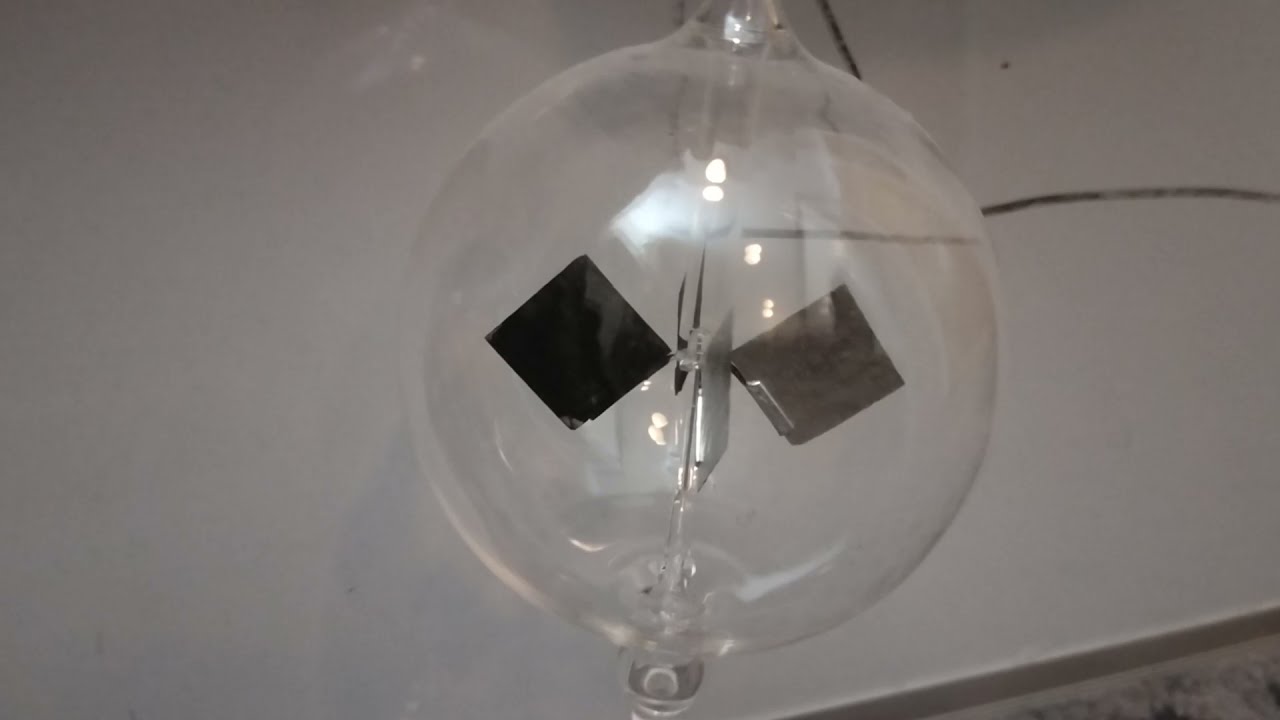 People have been trying to find out what makes the radiometer turn ever since 1873, when it was invented by Sir William Crookes (1832–1919). He thought it was pressure from the light, which was somehow pushing harder on the black surfaces than on the shiny surfaces. Sir William, who was a smart man but was wrong about the light-pressure effect, launched a scientific quest that hasn’t stopped yet. Even today’s encyclopedias give a popular, but demonstrably wrong, explanation of how Crookes’s radiometer works.

Warning: You are about to encounter one of only two places (I hope) in which the answer to a question will be somewhat less than satisfying. The best current explanation of the radiometer, which I promise I will give you at the end, is a bit hard to swallow and is still being doubted by some scientists, including me. The other less-than-satisfying explanation is why the shower curtain is sucked inward during your shower.

First, let’s debunk some of the obviously wrong radiometer explanations that are circulating as recklessly as a radiometer in hell.

Light, as everyone knows, is electromagnetic radiation. And electromagnetic radiation, as you either know or can quickly find out, is a stream of tiny packages of energy called photons. Photons act like little bullets, insofar as when they hit something, they can have a physical impact. For example, light photons can actually knock electrons out of many solid substances. That’s called the photoelectric effect, and the photon explanation that I just gave you won Albert Einstein a Nobel Prize. (He explained it in a little more detail than I just did.)

So, one might think, it’s the stream of photon bullets hitting the radiometer’s vanes that spins them around, just like when you, DO NOT TRY THIS AT HOME!, shoot a machine gun at a weather vane. While radiation pressure does indeed exist, we now know that it is much too weak to be pushing those vanes around. Moreover, radiation pressure should make the radiometer turn the other way!

Here’s why. Light is absorbed by black surfaces and reflected by shiny surfaces. The black surfaces of the vanes simply swallow the photons, whereas the shiny surfaces spit them right back out again, getting a backward recoil kick just as a gun gets when spitting out a bullet. That would make the vanes spin away from their shiny sides and toward their black sides, just the opposite of what we see happening.

This appears to be the best-loved of all the wrong explanations. It is dispensed by the Encyclopædia Britannica and other encyclopedias, as well as by many science teachers.

But let’s ask the following question: When the air is heated, which indeed makes its molecules move faster, why should those faster-moving molecules dash themselves against the vanes any more often than they dart off in any other direction? There can be no net directional force from the molecules’ motion. Putting it another way, the air’s pressure can’t increase, because it is not confined. It is free to expand and relieve any incipient pressure anywhere it likes within the bulb, so there is no more reason for it to expand against the vanes than in any other direction. Thus, there is no net vane-pushing force caused by the warmer air.

Some conspiracy theorists would have us believe that the black coating on the vanes contains adsorbed (surface-bound) gases, and that when the black sides are heated by absorbing light, those gas molecules are expelled, sort of like popcorn from a frying pan. The leaping gas molecules would exert a force on the black surface, just as a basketball player exerts a force on the court floor when he jumps, and this force pushes the vanes around. But if this were true, the radiometer would eventually wear out as all the adsorbed gases were released.

What if the photons of light are ejecting electrons from the black sides of the vanes and, in departing, the electrons give a backward kick to the vanes? No cigar on that one, either, because you can make radiometer vanes out of materials that don’t exhibit the photoelectric effect; their electrons are held too tightly for visible light to be able to knock them out. Also, the photoelectric effect would still occur even if the bulb were completely evacuated, but the radiometer won’t work without some air in the bulb.

The heated black surface sets up air currents by convection, and the moving air blows the vanes around. The only trouble with this one is that nobody can invent any air currents that blow mainly in one direction: against the black sides of the vanes.

In 1881, a British mechanical engineer named Osborne Reynolds (1842–1912) published a paper that explained the radiometer in a way that many scientists now grudgingly accept. The reason it isn’t more widely known is probably that it isn’t easy to describe or to understand. But here goes.

It has something to do with the temperature difference between the warmer air adjacent to the black sides of the vanes (due to their energy absorbing nature) and the cooler air adjacent to the shiny sides. Apparently, when this air flows out to the edges of the vanes, the warmer, faster molecules strike the edges at a more oblique angle than the cooler molecules do, and that pushes the vanes in a direction away from the black sides.

Exactly why this should be true is buried in complex mathematics, which I shall not attempt to decipher for you (or me). I confess that it’s hard for me to believe that it’s the edges of those skinny vanes, rather than their broad surfaces, that push them around. But that’s what Mr. Reynolds says, and none of the other explanations stands up under close examination. I warned you, didn’t I?

If scientists today can unravel the mysteries of life itself, why can’t they explain the simple little radiometer after more than a hundred years of trying?

The main answer is that they haven’t really been trying. There has been no vast federal program to inject billions of dollars into radiometer research as there have been for the Manhattan (atomic bomb) Project, the space program, genetic research and other health-related enterprises.

Not that money alone can solve a scientific problem, but scientists are like everybody else: They tend to do what they get rewarded for, and nobody is going to get a research grant, a promotion or a Nobel Prize for figuring out how a toy works.