How Does an Eraser Erase Pencil Marks?

It doesn’t work like a chalkboard eraser, which wipes an accumulation of chalk off a smooth surface. Paper isn’t that smooth and a pencil mark isn’t all on the surface; most of it is embedded among the paper fibers.

If you look at a pencil mark under a microscope, you’ll see that it’s not continuous; it is made up of individual black particles, a few ten-thousandths of an inch (several thousandths of a millimeter) in size, clinging to the paper fibers and tangled among them. The eraser’s job is to pluck out these tiny particles. It can do that because (a) it is flexible enough to reach down between the fibers and (b) it is just sticky enough to grab on to the black particles and pull them out.

But while the eraser is rubbing the paper, the paper’s fibers are rubbing off pieces of the rubber, which is now the rubbee, so to speak. The rubbed-off shreds of rubber roll up their collected black particles into those pesky crumbs that you have to brush away. Under the microscope, those crumbs look like enchiladas rolled in coal dust, to coin a rather unappetizing simile. 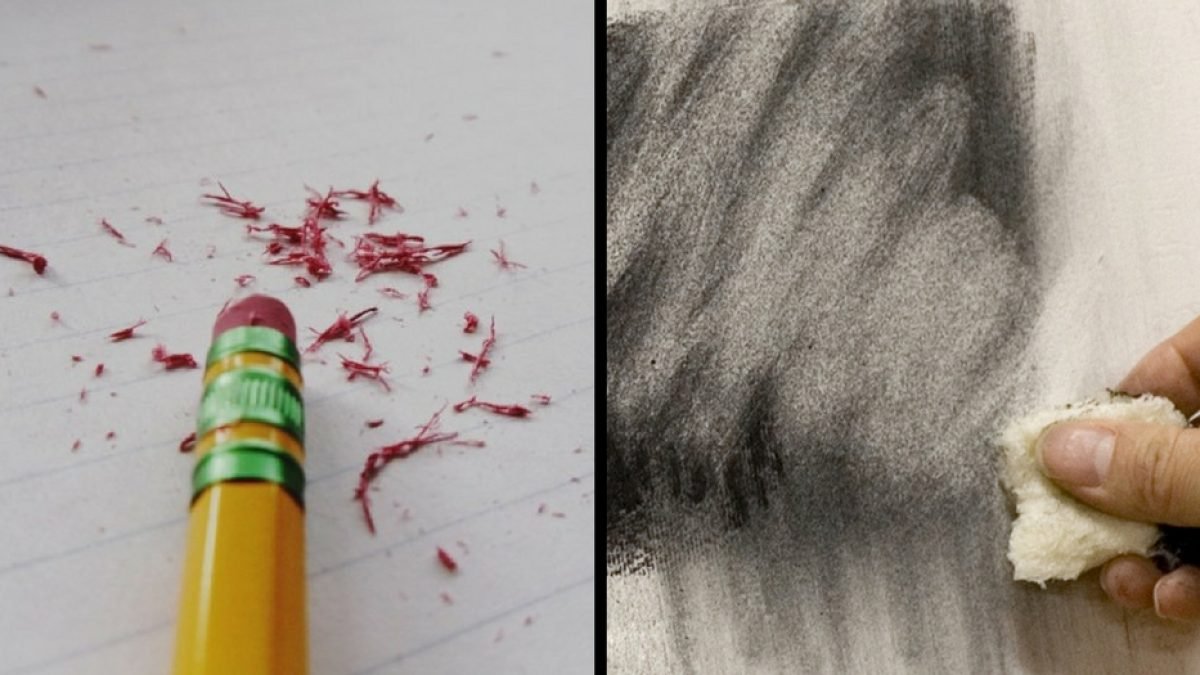 The black particles are made of graphite, a shiny, black mineral form of carbon that breaks apart easily into flakes. In its pure form graphite is much too crumbly to make sharp, detailed lines, so it is mixed with clay as a hardener and wax as a binder, in order to make pencil “leads” which, it behooves me to point out, contain no lead at all.

Real lead is a soft, gray metal that will leave dark marks when rubbed on a smooth surface. It was used for writing until the mid–sixteenth century, when a Swiss naturalist named Conrad von Gesner (1516–1565) put some graphite into a wooden holder and made the first pencil. Up until that time, graphite was thought to be a form of lead, and with an astounding display of inertia we are still calling the black stuff in pencils “lead” more than four centuries later.

Even Herr Gesner was apparently unable to prevent the German word for his pencil invention from becoming bleistift, which means “peg of lead.” And while we’re at it, the English word “pencil” comes from the Latin penicillus, meaning a brush. And if you must know, penicillus is the diminutive of penis, meaning a tail. Don’t blame me.

So-called soft pencils, like the notorious No. 2s that we have all had to use on machine-scored tests, are not darker because the particles of graphite are any blacker. It’s that more of them are deposited on the paper because of a higher ratio of soft graphite to hard clay in the pencil. The larger proportion of graphite allows more and bigger black particles to be scraped off onto the paper, which makes a broader and denser mark.

Graphite is a shiny mineral, and the dense marks that are left on the test sheets when we fill in the spaces with our No. 2 pencils reflect light. The sheets are run through a machine that scans them with light beams and searches for reflections. If light is reflected from the right places but not from the wrong ones, congratulations. You get a good grade.

And finally, did you ever wonder why rubber is called rubber? Because it’s used to rub out pencil marks, of course.

In 1752, a member of the French Academy first suggested that coagulated caoutchouc, or latex, a gummy sap from certain South American trees that we turn into rubber, could be rubbed on lead marks to erase them. In 1770 the English chemist Joseph Priestley (1733–1804) was apparently so impressed that he named the substance “rubber,” and it stuck.

Today the name makes little sense, because rubber automobile tires, gaskets and so on aren’t used to rub anything. Even the name “graphite” makes little sense today, because it was derived from the Greek word graphein, meaning “to write,” and graphite has many other uses, in items ranging from lubricants to golf clubs.

All of which shows that writing has always been of more importance to mankind than automobiles or golf, although in our present society you’d never know it.