Why Does Rubber Stretch?

Rubber molecules are shaped like long, skinny worms, all coiled and curled up, but capable of being straightened out by appropriate tugs on their heads and tails. A piece of rubber is like a can of these worms, all tangled together.

But think: You couldn’t straighten out a whole snarl of worms by grabbing a head and a tail at random and tugging them apart; they would just slide past one another (unless they belonged to the same unfortunate critter). The two would have to be tied to each other in some way, so that a tug on one worm would get transmitted to its neighbor, and then to its neighbor’s neighbor, and so on. 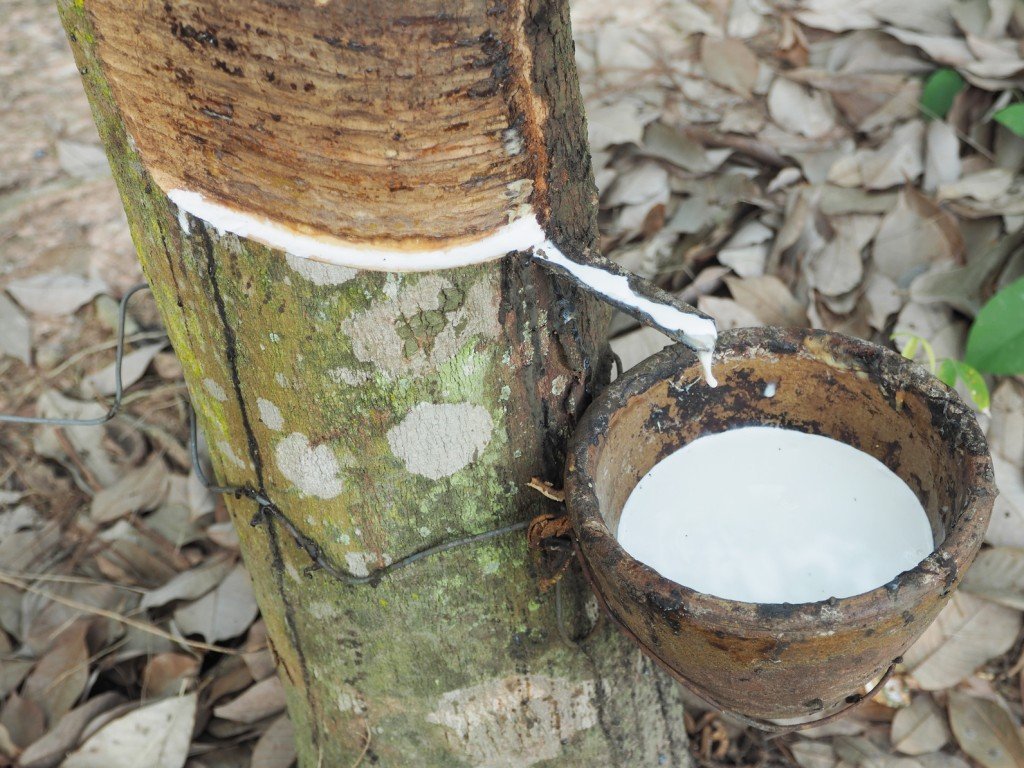 What we need is a can of worms that are spot-welded to one another in various places: Siamese worms, joined at the hip in various locations along their lengths. (Okay, so worms don’t have hips, but you get the point.)

That’s what the molecules of rubber are really like. But not at first, when the latex sap drips out of the rubber tree and is congealed and pressed into a sticky glob. Its molecules aren’t spot-welded together very much, and especially when warmed they can slide easily over one another and the stuff becomes soft and gooey. A ball made out of raw rubber would hit the floor with a dull thud. And don’t even think of making tires.

Humans therefore have to come along and accomplish the spot-welding themselves. They use a simple process called vulcanizing: heating the rubber together with sulfur. The sulfur atoms form bridges, or cross-links, between the rubber molecules, which allow them to stretch out to a certain extent, but unremittingly urge them back to their initial positions. That’s why treated rubber is elastic: The molecules will stretch, but the cross-links will always bring them back.

The process was discovered in 1839 by Charles Goodyear (1800–1860), yes, that Good-year, who had been trying for ten years to find a way of making rubber tougher until he accidentally spilled some rubber mixed with sulfur onto a hot stove and it became tough and elastic. His discovery made him famous but not rich, and he died deep in debt. That’s the way the ball bounces.

Find a sturdy rubber band, at least a quarter of an inch (about half a centimeter) wide, and touch it briefly to your upper lip to test its temperature. Now stretch it quickly and while it’s stretched, touch it again to your upper lip. It’s warmer than it was.

What made it heat up?

When you stretched the rubber band, you put energy into it, didn’t you? That energy warmed it up. The energy came from your muscles, and you’ll have to eat a calorie or so of food to replenish it.

I have just sneaked in on you one consequence of the Second Law of Thermodynamics. This law of nature expresses the relation between energy and entropy, the degree of disorderliness of an arrangement. That’s dis orderliness: the degree of random, haphazard scrambling. The Second Law recognizes that Nature’s natural tendencies are (a) for energy to decrease, things tend to slow down and cool down, and (b) for entropy or disorderliness to increase, things tend to randomize and scatter.

If you want to counteract the tendency for higher disorderliness (higher entropy), you have to increase the energy of the arrangement. That’s an inevitable fact of nature; everything that happens is a trade-off between energy and entropy.