The giant squid is the second biggest squid and marine invertebrate in the world after the colossal squid. 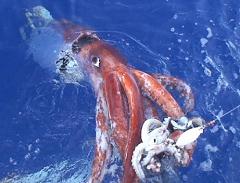 The giant squid is bigger than any octopus, and can grow up to 43 feet for females and 33 feet for males from caudal fin to the tip of the two long tentacles.

There have been reports of specimens of up to 66 feet, but none have been captured or scientifically documented.

Of course, both come in a variety of sizes. On the small end of the size continuum, the pygmy octopus is the Chihuahua of the cephalopod world, measuring only five inches wide with arms outstretched.

It likes to find an empty clamshell and hide inside, closing it using the suction of its suckers.

The giant squid also has the biggest eyes of any living animal. Their eyes can be bigger than a foot in size, which are better able to detect light in deep water where light is scarce.

The giant squid belongs to the cephalopod group of marine invertebrates along with the octopus and cuttlefish.