What Is the Best Type of Fire For Grilling: Charcoal or Gas, and Why?

The answer to that question is an unequivocal “It depends.” You can make burned-on-the-outside, raw-on-the-inside chicken equally well over charcoal or a gas flame.

As in all cooking, what matters is how much heat the food ultimately absorbs; that’s what determines its done-ness. Grilling infuses the necessary amount of heat by subjecting the food to a very high temperature for a short period of time, so a small difference in cooking time can make all the difference between succulence and cinders.

But the main reason that grilling is so tricky is that the temperature is hard to control. It’s easy to adjust a gas flame, but with charcoal you have to adjust the temperature continually by such antics as moving the food sideways to a hotter or cooler location, raising or lowering the grilling rack, and bunching up the charcoal to make it hotter or spreading it out to make it cooler. And the rules of the game differ, depending on whether you’re using a covered grill or cooking topless. 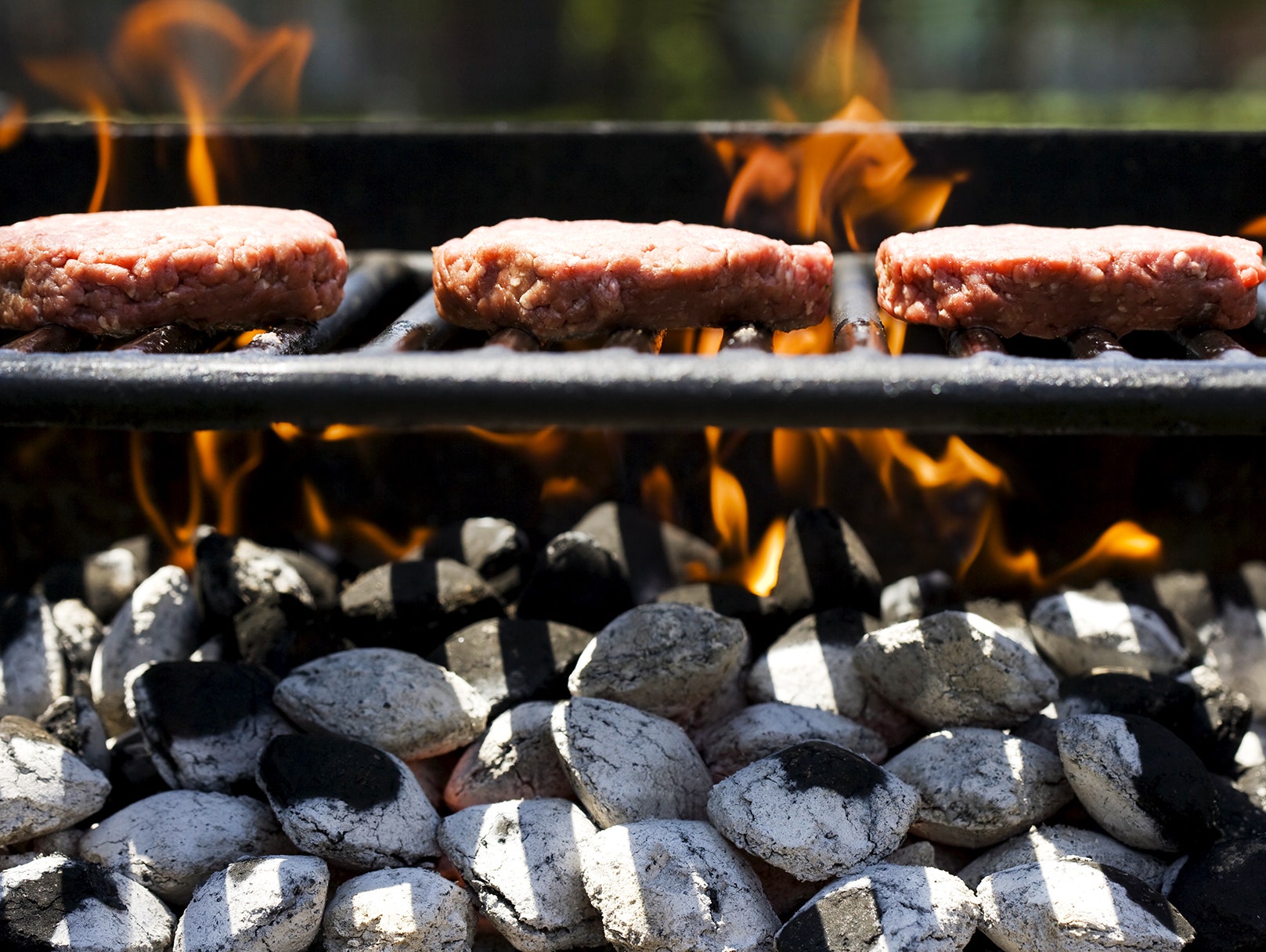 The ingredients of any fire are two: fuel and oxygen. If there isn’t enough oxygen available, the combustion process will be incomplete and some unburned fuel will show up as smoke and yellow flame.

The yellow color comes from unburned carbon particles that are heated to incandescence. Because combustion is never 100 percent complete, there will also be some poisonous carbon monoxide, instead of carbon dioxide, produced. That’s why you should never barbecue or grill indoors, no matter how cute your hibachi.

For cooking, we want complete combustion, so it’s essential that the fuel receive enough air. (Smoked foods are made by deliberately starving the heated wood of oxygen.) In a well-adjusted gas grill, the gas is automatically mixed with the right amount of air on its way to the burner; in charcoal grills, you have to manipulate the vent openings.

When the cave persons discovered fire and grilled their first mastodon burgers, wood was undoubtedly the fuel. But wood contains resinous and sappy substances that don’t burn completely and therefore produce dirty flames. Hardwoods contain less of these substances, and hardwood is still preferred for grilling by purists who believe that there’s no fuel like an old fuel and who value the unique, smoky flavor that a wood fire imparts.

The fuelish question that most people ask is whether to burn charcoal or gas, and, of course, which equipment to burn it in. These days, the equipment can range anywhere from a fire-escape hibachi to a suburban behemoth equipped with everything but tail fins and radar.

Charcoal is wood that has been heated at a high temperature, but in the absence of air so it can’t actually burn. All the sap and resins are decomposed or driven off, leaving almost pure carbon that will burn slowly, quietly, and cleanly.

Natural hardwood charcoal, still wearing the shapes of the chunks of wood it was made from, contains no additives and imparts no off-flavors to the food. Charcoal briquettes, on the other hand, are manufactured from sawdust, wood scraps, and coal dust, held together with a binder. Coal is far from pure carbon, however; it contains an assortment of petroleum-like chemicals whose smoke can affect the flavor of food.

The cleanest-burning fuel of all is gas, either the propane sold in tanks or so-called natural gas (methane) that’s piped into our houses. Gas grills are made for both kinds. The gases contain no impurities to speak of, and they burn to produce essentially nothing but carbon dioxide and water.

But what about that “charcoal flavor” that everyone values so highly? Can you really get it by cooking over a gas flame?

takes place on the seared surface of the food because of the very high temperature. It also comes from melted fat, which drips down onto a hot surface, a glowing briquette or a gas grill’s lava stones or porcelain bars, is vaporized, and sends its smoke back up to condense on the surface of the food.

But if too much fat drips you’ll have flare-ups, which are undesirable because fat, although a great fuel, doesn’t have the time or oxygen to burn completely, and it therefore produces a sooty, yellow flame that licks at your food, charring it and depositing horrible chemicals and unpleasant flavors. To avoid burning at the steak, trim off most of the fat beforehand and if a flare-up nevertheless occurs, move the meat off to the side until the flames subside.

Then there’s the problem of getting a charcoal fire started. No fuel will start burning until it gets hot enough for some of it to vaporize. Only then can its molecules mix with oxygen molecules in the air and react with them in the heat-producing reaction called combustion. Once the combustion reaction gets going, the heat it releases keeps vaporizing more fuel and the whole process becomes self-sustaining.

Gas, of course, is already vaporized, so all you need is a spark or a match to get it going. But the bugaboo of charcoal grilling is getting the stuff hot enough to accomplish that all-important initial vaporization.

Enter starter fluid, the fuel that kindles fuel. Starter fluid is a petroleum-derived liquid that lies somewhere between gasoline and fuel oil. If you wait about a minute for it to soak into the charcoal before lighting it, most of its fumes will be absorbed. But in my opinion charcoal is the world’s champion odor retainer (it’s used in water purifiers and gas masks), and the starter smell never really burns off completely.

Electric loop starters work slowly but well, if you have electricity handy. But in my opinion the best way of starting a charcoal fire is the newspaper-fueled chimney, which is both fast and odorless. You just stuff some newspaper into it, load it with charcoal, light the paper, and in 15 or 20 minutes the charcoal will be well ignited and ready to be dumped into the grill.

The most burning question of all, however, is which fuel, gas or charcoal, is better? Well, which political party is better? There are staunch partisans of each. I personally prefer charcoal for two reasons.

One, there are too many puny gas grills on the market that don’t produce much more heat than a Zippo lighter. And two, while burning charcoal produces only carbon dioxide, burning gas produces carbon dioxide and water vapor.

Although I haven’t done any experiments, I believe that the water vapor might prevent the food from getting as hot as a charcoal fire would make it, and high, dry heat is the absolute essence of successful grilling.