Does It Ever Really Get Hot Enough To Fry an Egg On the Sidewalk?

It’s unlikely. But scientific opinion has never been known to discourage people from trying to prove an age-old urban legend.

When I was a kid in The Big City in the days before air conditioning, at least one newspaper would cook up an egg-on-the-sidewalk story sometime during the “silly season”, the dog days of summer, when even bank robbers were too lazy to make news and reporters had little to do. But to my recollection no one ever claimed to have actually pulled off the egg trick.

That hasn’t stopped the 150 citizens of the old Mojave Desert mining town of Oatman, Arizona, 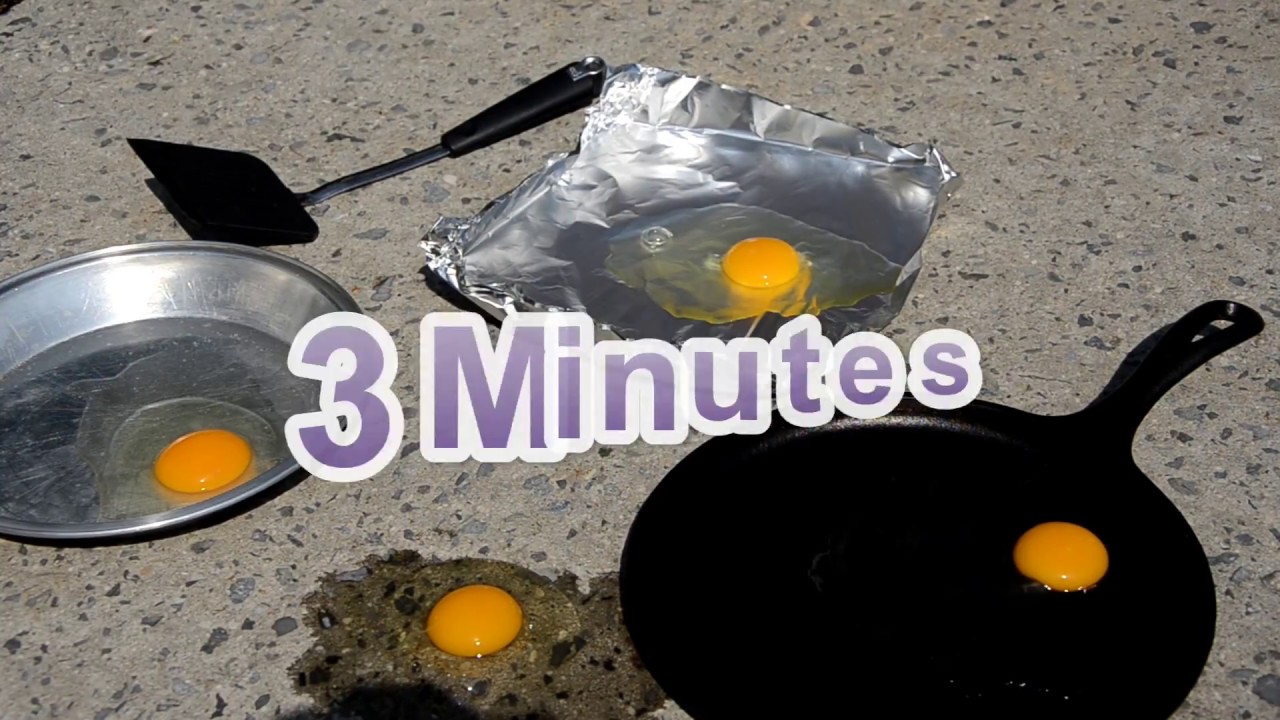 from holding an annual solar egg-frying contest every Fourth of July by the side of the fabled Route 66. According to Oatman’s exalted Egg Fry Coordinator, Fred Eck (get it?), the contestant who comes closest to cooking an egg in 15 minutes by sun power alone wins.

An occasional egg has indeed been cooked in Oatman, but the rules allow such gimmicks as magnifying glasses, mirrors, aluminum reflectors, and the like. No fair, I say. We’re talking here about breaking an egg directly onto the ground and leaving it alone.

A couple of years ago, finding myself in Austin, Texas, during a heat wave, I determined to find out whether it was possible to fry an egg on a sidewalk without any optical or mechanical aids.

In order to draw meaningful conclusions, I had to measure the sidewalks’ temperatures. Fortunately, I had with me a wonderful little gadget called a non-contact thermometer. It’s a little gun that you point at a surface and when you pull its trigger, it instantly reads out the temperature of that surface, anywhere from 0°F to 500°F.

The so-called MiniTemp, manufactured by Raytek in Santa Cruz, California, works by analyzing the amount of infrared radiation being emitted and/or reflected from the surface; hotter molecules emit more infrared radiation. My MiniTemp was an ideal tool for the sidewalk cooking experiment, because I already knew how hot it has to be to cook an egg, and if you keep on reading, so will you.

On a particularly scorching day I went around measuring the mid-afternoon temperatures of a wide variety of sidewalks, driveways, and parking lots, trying not to upset any Texans by looking as if I were pointing a real gun.

The ground temperatures varied quite a bit depending, not unexpectedly, on the darkness of the surface. Blacktop paving was much hotter than concrete, because dark objects absorb more light and therefore more energy. So there goes one cherished notion about outdoor egg-fries; you’d have a better chance in the middle of a blacktop street than on the sidewalk.

Although the air temperatures hovered around 100ºF, I never found a surface hotter than about 125ºF on concrete or 145º on blacktop (remember that number). In either case, the temperatures plunged almost immediately when the sun went behind a cloud (okay, a cloud went in front of the sun), because much of the infrared radiation coming from the surfaces is simply solar radiation that is being reflected back. Bright, shiny metal surfaces, in fact, reflect so much solar radiation that the MiniTemp won’t give accurate readings of their temperatures.

Now it was time for the crucial experiment. I had previously taken an egg from the refrigerator and warmed it to room temperature. I cracked it directly onto the 145ºF surface of an asphalt-paved parking lot at high noon. I didn’t use cooking oil, which might have cooled the surface too much. Then, I waited.

If you don’t count the odd glances I received from passersby, nothing whatsoever happened. Well, maybe the egg white became slightly thicker at the edges, but there wasn’t anything remotely resembling cooking. The surface just wasn’t hot enough to cook an egg. But why not, I wondered?

First of all, only the white of the egg, or albumen, was in contact with the hot surface, the yolk floats on the white, so it’s a matter of what temperature might be required to cook the albumen. And what do we mean by “cook,” anyway? Egg white is a mixture of several kinds of protein, each of which is affected differently by heat and coagulates at a different temperature. (You expected a simple answer?)

But in an eggshell, it all boils down to this: Egg white begins to thicken at about 144ºF, it ceases to flow at 149ºF, and it becomes fairly firm at 158ºF. Meanwhile, a yolk will begin to thicken at 149ºF and lose its fluidity at 158ºF. So to cook an entire egg to a non-runny, sunny-side-up condition, you’d want both the white and the yolk to reach 158ºF and to stay there long enough for the rather slow coagulation reactions to take place.

Unfortunately, that’s quite a bit hotter than any reasonably attainable ground temperatures. But more important, when you break a 70ºF egg onto the 145ºF ground it cools the surface down considerably, and there is no continual replenishment of heat from below, as there would be in a frying pan over a fire. Also, pavement is a very poor conductor of heat, so none can flow in from the surroundings.

Thus, even though a parking lot’s black surface might get close to the coagulation temperature of 158ºF on a really, really hot day, I’m afraid that actually cooking an egg on a sidewalk must forever remain but a midsummer night’s dream.

But wait! The roof of one sun-baked, dark blue, 1994 Ford Taurus station wagon measured 178ºF, more than hot enough to coagulate both white and yolk. And because steel is a good conductor of heat, that temperature could be maintained by heat feeding into the egg from other parts of the roof. Maybe cars, rather than streets and sidewalks, were the way to go.

Indeed, after I wrote about my experiments in my newspaper column, a reader wrote to tell me that in a World War II German newsreel he saw two Afrika Korps soldiers fry an egg on the fender of a tank. (Austin’s streets were mercifully free of tanks, although some SUV’s came close.) “They cleaned off a spot,” he wrote, “poured on a little oil, spread it around and then broke two eggs onto the surface. The whites turned opaque just as quickly as they do in my frying pan.”

I checked the Almanac and found that the highest weather temperature ever recorded was 136ºF on September 13, 1922, in El Azizia, Libya, not far from that German tank.

Another reader reported that she and some friends once cooked an egg on a sidewalk in Tempe, Arizona, when the air temperature was 122ºF, although she didn’t measure the temperature of the sidewalk.

“The egg came straight out of the refrigerator,” she wrote. “We cracked it directly on the sidewalk and immediately the white started cooking. In less than 10 minutes the yolk broke, and spread out and the whole egg cooked. We thought maybe it was a fluke that the yolk broke, so we tried another one and the yolk broke on that one, too, in about the same amount of time.”

Now, of course, I had to figure out why the yolks broke and spoiled the possibility of preparing sunny-side-up street food. I could only guess, but my reader gave me a clue.

“We went back inside the house,” she continued, “and a little while later my friend told us we’d better go clean up the eggs before her husband got home, so we went back outside. The eggs were completely dehydrated and broken into little pieces and there were a bunch of ants carrying off the pieces; we had nothing to clean up.”

Aha! That’s the answer: dehydration. In Arizona, the humidity can be so low as to be almost nonexistent, so liquids evaporate and dry up in a flash. What must have happened is that the surface of the egg yolk quickly dried out, became brittle, and cracked open, spilling its still-liquid contents.

Eventually, the whole egg schmear dried out and cracked into small platelets, like mud does in a dry lake. The platelets were just the right size for the happy ants to cart off to wherever it is that ants take their afternoon tea.

The wonderful thing about science is that it can even explain things that nobody needs to know.