What is the Difference Between Simmering and Boiling Water?

The difference between simmering and boiling is more basic than just the vigor of the bubbling.

A simmer aims to produce a slightly lower temperature than true boiling, because even a few degrees difference in cooking temperature can make a big difference in how things cook. In moist cooking, cooking with lots of water present, as opposed to roasting, there is only a narrow range of possible temperatures, so getting exactly the right temperature can be tricky. 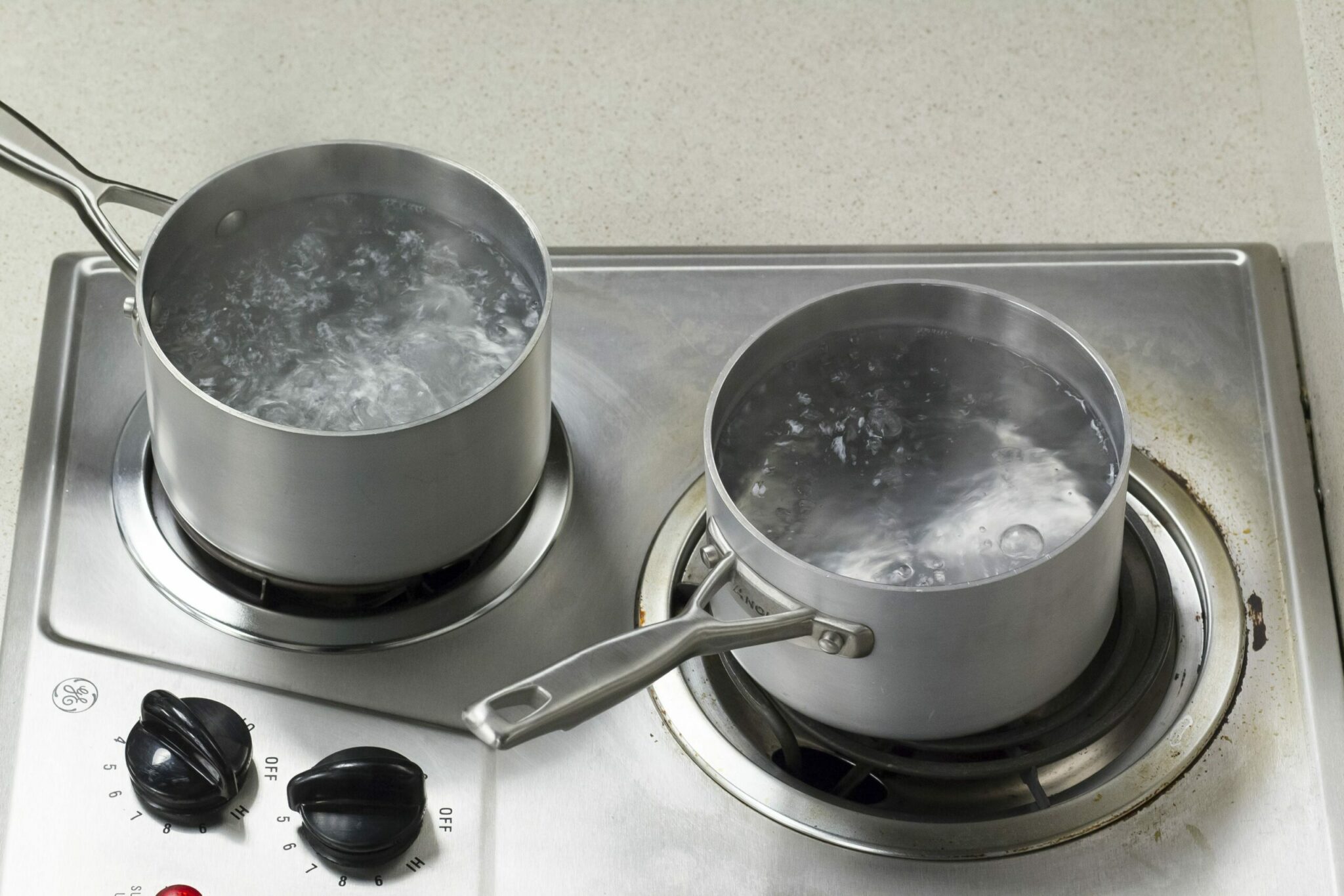 Everybody knows the general effect of temperature on cooking speed: the higher the temperature, the faster the cooking. But it’s also true that different things happen to food when it is cooked at even slightly different temperatures, because different chemical reactions may be going on. The question of temperature is particularly important in the water-cooking of meats.

Meats undergo different tenderizing, toughening, and drying-out reactions (even when they’re immersed in sauces) at different temperatures. The temperature of a full boil, for example, encourages the toughening process, but the slightly lower temperature of a simmer promotes tenderizing. Long experience has taught us which methods work best with which dishes, so it’s wise not to monkey with recommended cooking methods.

Outright boiling, lots of big bubbles, such as in cooking pasta, is an infallible indicator of one specific temperature: the boiling point of water. This sets a definite upper limit to the temperature at which we can water-cook food, because water can never get above its boiling temperature, no matter how vigorously we boil it. All those bubbles bursting at the surface are telling us quite clearly that our food is cooking at just about 212 degrees Fahrenheit (100 degrees Celsius), depending slightly on various conditions.

But many desirable cooking reactions take place at lower temperatures. How low? It depends on the food. The only important lower limit for cooking is the temperature that’s needed to kill most germs: about 180 degrees Fahrenheit (82 degrees Celsius). The problem is, how do we achieve one of these lower cooking temperatures reliably when we need it? There is no obvious sign like bubbling to watch for, and we can’t be expected to keep sticking thermometers into our pots all the time.

When cookbook writers want to tell you that something should be cooked at a certain temperature below actual boiling, they invoke words such as simmer, gentle simmer, slow boil, poach, and coddle. Then they wave their arms around, trying to describe what those words are supposed to mean. And they fail miserably. Look up “simmer” in professional books on cooking technique, and you’ll be told that it means everything from 135 degrees Fahrenheit (Good luck! Dangerous salmonella bacteria aren’t killed until 140 or 150 degrees), all the way up to 210 degrees; that is, anywhere from 57 to 99 degrees Celsius.

But trying to specify a standard “simmering temperature” is silly anyway, because the temperature inside a pot on a stove will vary quite a bit from one spot to another and from one moment to the next. A few of the factors that affect the food’s temperature are the size, shape, and thickness of the pot; what it’s made of; whether or not it is covered and, if so, how tightly; the steadiness of the heat source; the contact between the pot and the burner; the amounts of food and liquid in the pot; and the characteristics of the food itself.

There is only one way to achieve a proper simmer: Forget about temperature and concentrate on what the stew is doing. Carefully adjust the pot, the cover, and the burner so that bubbles are reaching the surface only occasionally. That means that the average temperature in the pot is somewhat below boiling, which is just where you want it.

The occasional hot spots here and there throw occasional bubbles to the surface, just to let you know that it’s not too cool Remember that real boiling is when almost all of the bubbles reach the surface. If the temperature is somewhat lower than the normal boiling point, bubbles may form at the bottom, but they are reabsorbed before ascending all the way to the surface. That’s what’s going on during a proper simmer.

What about poaching and coddling? Poaching is just another word for simmering, usually applied to fish or eggs. Coddling is placing the food, usually an egg, in water at boiling temperature and then turning off the heat. The temperature decreases steadily as the water cools, so that the average temperature turns out to be the kindest and gentlest of all. The result is a thoroughly pampered, humored, and overindulged egg.