What Should I Look For When Buying a Frying Pan?

The ideal frying pan will distribute the burner’s heat uniformly over its surface, transfer it quickly to the food, and respond promptly to changes in heat settings. That boils down to two qualities: thickness and heat conductivity. Look for a thick pan made out of a metal that conducts heat as efficiently as possible.

A frying pan should be made of heavy-gauge metal, because the more bulk it has, the more heat it can hold. When you add room-temperature ingredients to a hot, thin pan they can rob enough heat from the metal that it falls below the optimum cooking temperature. 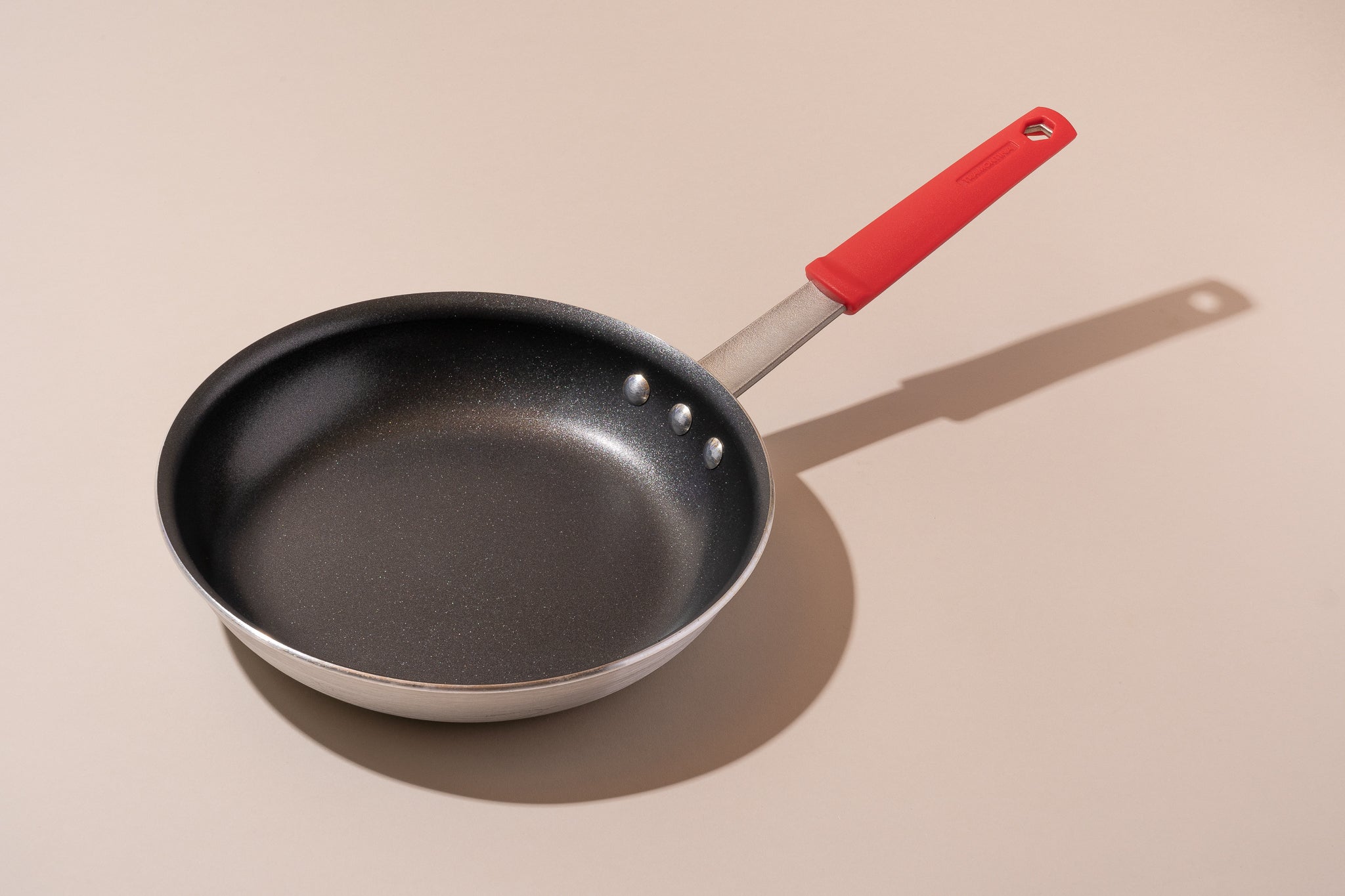 Moreover, any hot spots on the range burners will go straight through the bottom of a thin pan to the food without being dispersed sideways, resulting in burned or scorched spots on the food. A thick pan, on the other hand, has enough heat reserves or “heat inertia” to maintain a steady cooking temperature in spite of these vicissitudes.

The most crucial property of a frying pan’s metal is how well it conducts heat; it must have what scientists call a high thermal conductivity. That’s true for three reasons.

First, you want the pan to transmit the burner’s heat quickly and efficiently to the food. You wouldn’t get much frying done in a pan made of glass or porcelain, which are terribly slow conductors of heat.

Second, you want all sections of the pan’s surface to be at the same temperature, so that all the food gets the same treatment despite unevenness in the burner’s temperature. Gas burners have separate tongues of flame lapping at different parts of the pan’s bottom, while electric burners are coils of hot metal with cooler spaces in between. A high-conductivity pan bottom will quickly even out these irregularities.

Third, you want the pan to respond rapidly to changes in burner settings, both up and down. Frying and sautéing are constant battles to keep the food at a high temperature without burning it, so you must frequently adjust the burner. A pan made of high-conductivity metal will respond quickly to these changes.

Okay, so which metal is best?

And the winner is, silver! The best frying pan in the world would have a heavy bottom made of the one metal which conducts heat better than all others: silver.

You say you can’t afford a sterling silver frying pan? Well, there is a very close second: copper, which conducts heat 91 percent as well as silver. Too much copper in the diet can be unhealthful, however, so the insides of copper pans must be lined with a less toxic metal. Tin was the standby for many years, but it is soft and melts at only 450°F. Modern metallurgical technology can bond thin nickel or stainless-steel layers to the insides of copper pans.

In my opinion, then, you can find nothing better than a heavy copper frying pan lined with stainless steel or nickel. Unfortunately, you may have to hock your wok to buy one. It’s the most expensive cookware because copper is more expensive than aluminum or stainless steel, it’s a difficult metal to work, and bonding steel or nickel linings onto it isn’t easy to do on a mass-market scale.

Then what’s the next-best metal? Aluminum. It’s very cheap, yet it conducts heat 55 percent as well as silver does, still no slouch in the heat transmission derby. A thick aluminum pan can do a fine job of frying and sautéing, and it has the advantage of being only 30 percent as heavy (dense) as copper.

BUT (there’s always a but): Aluminum is susceptible to attack by food acids, so it, too, is often lined with a nonreactive coating such as 18/10 stainless steel: an alloy that contains 18 percent chromium and 10 percent nickel. A hard stainless steel layer also conquers the main problem with aluminum: its relative softness. It scratches easily, and food will stick to a scratched frying pan surface.

There is another way to protect aluminum, however. Its surface can be electrochemically converted into a layer of dense, hard, nonreactive aluminum oxide by a process known as anodizing , passing an electric current between the aluminum and another electrode in a sulfuric acid bath. Calphalon is one popular brand of anodized aluminum cookware.

The oxide layer, normally white or colorless but blackened by a dye in the acid bath, serves both to protect the aluminum’s surface, it’s 30 percent harder than stainless steel, and to protect it from acids, although the oxide is susceptible to alkaline chemicals such as dishwashing detergent. The anodized surface is also stick-resistant, but not actually nonstick. A really heavy anodized aluminum pan is certainly worth considering. It should be at least 4 millimeters thick.

At the bottom of the frying pan quality heap is solid stainless steel, which is the worst conductor of all among the common skillet materials: only 4 percent as good as silver. It can be shiny and pretty when new, but I call it “shameless steel” because it claims not to corrode or stain, yet it really does; salt can pit it and it discolors at high temperatures.

The individual virtues of copper, aluminum, and stainless steel can be combined by layering the metals, as we’ve seen with stainless-steel-lined copper and aluminum. All-Clad’s Master-Chef pans, for example, have a core of aluminum sandwiched between two layers of stainless steel. Their CopR-Chef pans are a sandwich of aluminum between a stainless inside and a copper outside, but the copper is largely cosmetic; it isn’t thick enough to compete with the arm-and-a-leg French solid copper pans. And speaking of layers, you can opt for a nonstick coating on the interior surfaces of many of these pans

Finally, most inexpensive of all and in a class by itself is that old, black cast-iron skillet that comic-strip wives used to hit their husbands over the head with. It is thick and heavy (iron is 80 percent as dense as copper), but a poor heat conductor: only 18 percent as good as silver.

Thus, a cast-iron skillet will be slow to heat, but once heated, and it can be taken up to a couple of thousand degrees without warping or melting, it will hold onto its heat tenaciously. That makes it an excellent pan for certain specialized uses in which a high, uniform temperature must be held for a long time. No true southerner would make fried chicken in anything else.

You should certainly keep one handy for dealing with domestic fowls and domestic fouls, but it’s not the general-purpose tool you inquired about.