What Species of Wild Cat was the Ancestor of the Domesticated House Cat?

Cats are a rapidly evolving family of mammals that share a common ancestor from only 10-15 million years ago, and include the domestic cat, lions, tigers, cougars, and many others. 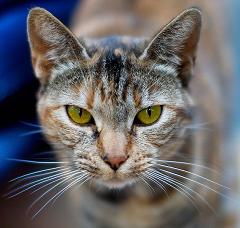 The shorthaired breeds were descended from a species of African wildcat called the Caffre cat (Fells libyca).

Tamed by the ancient Egyptians sometime around 2500 B.C., the Caffre was brought back to Europe by the Crusaders, where it bred with small indigenous wildcats, and the modern house cat was created.

The longhaired cats, on the other hand, is believed to have descended from the Asian wildcat (Fells manul).

Domestic cats are not much different from wildcats, and they can readily interbreed. These hybrids threaten the genetic uniqueness of wildcat populations in many countries such as Scotland.

Both species of cat evolved into their present form centuries ago and have preserved their independent attitude and habit for solitary hunting. Good thing, too.

Would any animal alive be able to defend itself against a determined pack of house cats? Not likely.