The modern version of the marshmallow is only about a hundred years old, but it’s a new take on a several-thousand-year-old treat. 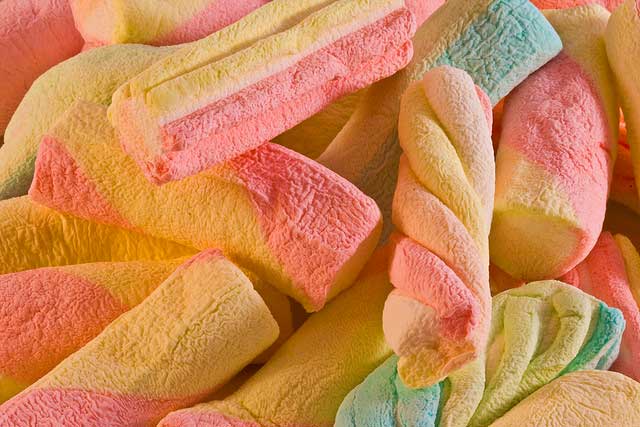 The magical material we call marshmallow is named after the marsh mallow plant (Althaea officinalis), whose roots contain a sweet, gummy sap that has been used as a confection and for its supposed medicinal properties for some four thousand years. 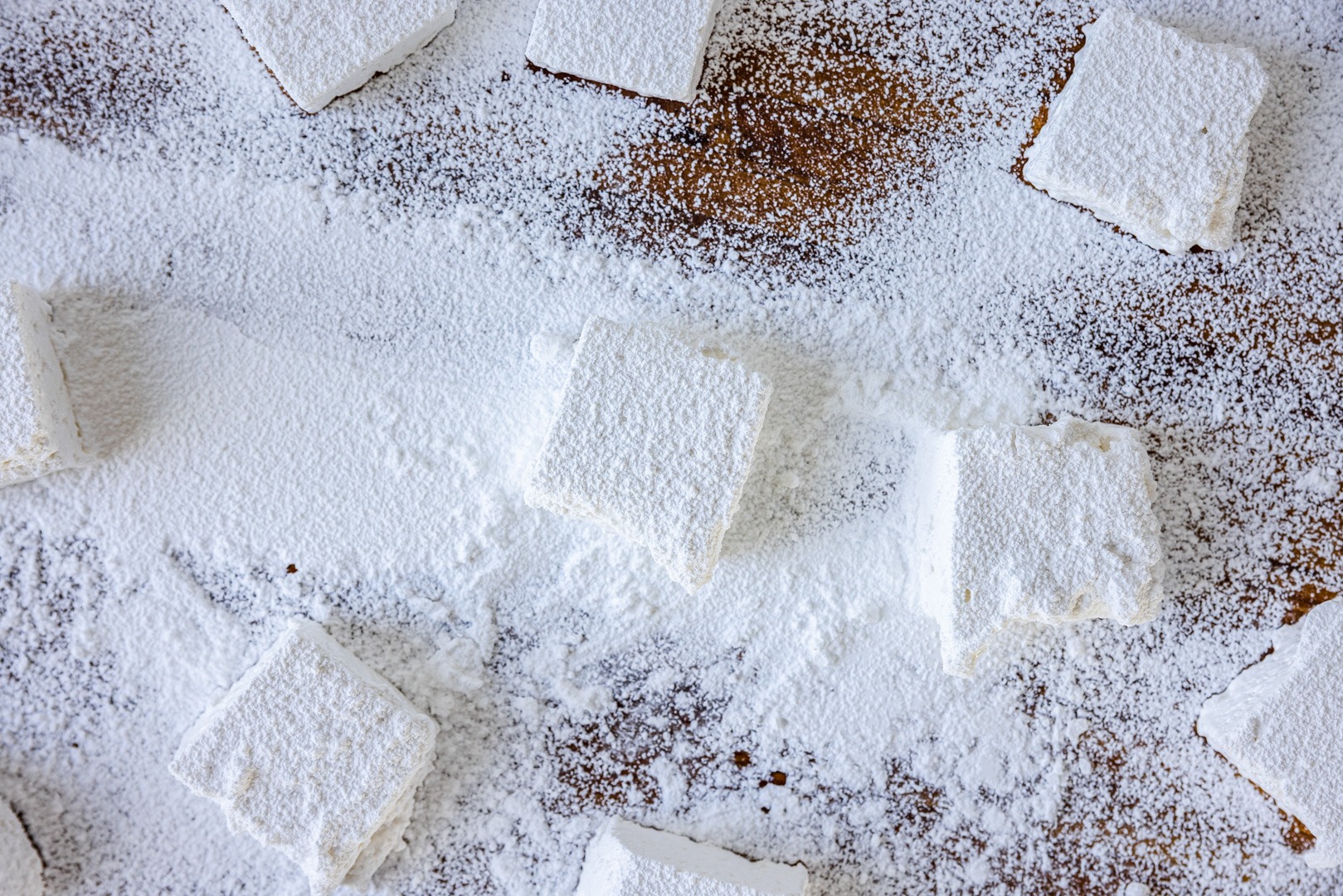 In the late nineteenth century, when candy makers were unable to keep up with demand for the real thing, an imitation marshmallow was concocted from sugar, starch, and gelatin. Today, most marshmallow candies are made from corn syrup, sugar, modified starch, and gelatin. (Modified starch is starch that has been treated chemically or physically to improve its characteristics for manufacturing purposes, such as by making it able to mix with and thicken cold water.)

The most pleasurable characteristic of marshmallow is its uniquely soft, pillowy texture, unmatched by any other food. To make it, a hot (240°F or 116°C) mixture of corn syrup, sugar, water, and gelatin is whipped vigorously into a frothy foam until it is two to three times its original volume. Zillions of microscopic air bubbles remain trapped as the mixture cools and the gelatin sets. The result is a solid foam that is only 35 to 45 percent as dense as water.

Technically, a foam is a suspension of gas bubbles in a liquid. The bubbles are so tiny (they are of colloidal size) that they never rise to the surface; they stay suspended in the liquid. Often, as in the case of marshmallow, polystyrene foam (trademarked Styrofoam), and baked meringues, we still call it a foam after the liquid has solidified or dried. Foams can be stabilized, the air bubbles prevented from coalescing into bigger bubbles, by emulsifying agents such as soaps and certain proteins. In foods, we prefer the protein stabilizers: gelatin, the casein in whipped cream, and the albumins in egg-white meringues can all do the job.

The most familiar brands of marshmallow confections, Campfire and Jet-Puffed, are in the shape of small cylinders about an inch in diameter and an inch long. Why that shape? In marshmallow factories the liquid foam is piped through a long, one-inch-diameter tube as it cools, and the emerging rope is then chopped into approximately one-inch lengths. (In case anyone ever asks you, Campfires are an eighth of an inch wider and an eighth of an inch shorter than Jet-Puffed marshmallows.)

By measuring and weighing them carefully (okay, so I’m a nut), I have calculated (a) that Campfire marshmallows are 23 percent puffier (less dense) than Jet-Puffed, and (b) that the 90 million pounds of marshmallows consumed annually in the United States would make a single marshmallow 30 yards in diameter and as tall as the Washington Monument.

The texture of marshmallow can be controlled by adjusting the proportions of ingredients and the amount of whipping. It ranges from the semi-liquid Marshmallow Fluff to the more elastic and chewier marshmallows that can stand up to being coated with chocolate. That’s why chocolate-covered marshmallow candies are never as soft inside as you expect them to be.

You cannot have read this far without thinking about toasting marshmallows on a stick over a campfire, right? The fire’s heat both melts the gelatin and caramelizes the sugar, producing a hot. caramel-flavored goo that yin-yangs your tongue with heat and sweet. But as in all cooking, there is a right way and a wrong way.

Wrong way: Hold the marshmallow just above the flames until it catches fire, and let it burn until it has a crisp, black crust. Don’t be deterred by the fact that the crust is made of indigestible carbon laced with bitter-tasting and undoubtedly carcinogenic tars.

Right way: Wait until the fire has died down to glowing coals and then hold the marshmallow high over them, rotating it until it slowly develops a nice uniform tan color. (Patience, patience.) If it should catch fire, blow it out immediately, let it cool for a few seconds, and resume toasting.

In the Boy Scouts I learned to search out and cut a long green twig that wouldn’t catch fire. Today, you can buy a package of 30 inch-long Smorstix that are, according to Smorstix, “made of t00% untreated white birch without any additives, dirt or grime.” With these, you can supposedly toast your marshmallows with a clear environmental conscience instead of “trampl[ing] the underbrush and damag[ing] trees and forests” (in Smorstix’s words) during your search for a toasting stick.

Ah, for the simpler, politically incorrect days of my youth.

My female readers are likely to know why Smorstix were so named: for s’mores, the Girl Scouts’ traditional campfire dessert made (according to the recipe in a 1927 Girl Scout manual) by inserting two toasted marshmallows between halves of a Hershey bar sandwiched between graham crackers. The hot, gooey marshmallow melts the chocolate, making even more goo.

For those who don’t have access to a campfire, I (don’t blame Marlene for it) have created Marshmallow Zaps, an indoor alternative to fire-roasted marshmallows.