What does Cocoa (Cacao) Percentage Mean on Dark Chocolate Labels?

Americans seem to have discovered only a few years ago that “chocolate” doesn’t have to mean Hershey bars and Whitman Samplers; they learned that serious chocolate bars, as distinguished from candy bars, could open a whole new world of flavors.

There are now dozens of dark chocolate bars on the market from both American and foreign manufacturers. Among foodies, chocolate tastings threaten to replace wine tastings as entertaining and educational activities.

The ingredient lists on the wrappers can indeed be perplexing, because most of the ingredients go by a number of aliases. So let’s look closely at what is in a serious bar of dark chocolate. 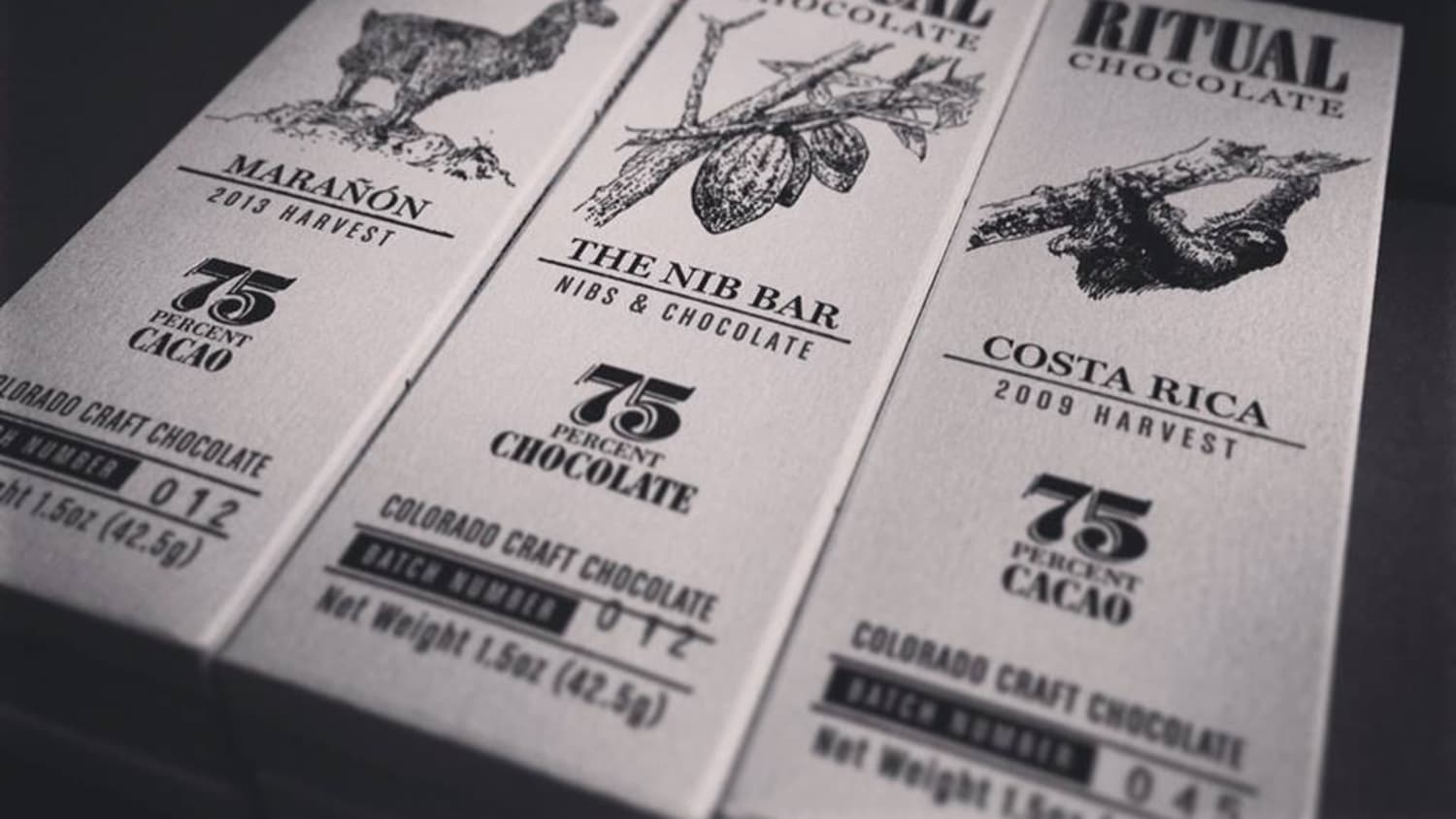 It all starts with cacao (ka-KAHoh), not cocoa (KO-ko), beans. Cacao beans are the seeds of the fruit of the tropical tree Theobroma cacao. (Theobroma literally means “food of the gods,” a name obviously chosen by a chocophile taxonomist.) The bitter cacao bean was enjoyed as a spice by the Mayans and Aztecs, but only after it made its way to Europe was it sweetened with sugar.

The rest of a chocolate bar is almost entirely sugar, so a “75%” chocolate bar will contain about 25 percent sugar. Thus, the higher the percentage number on the wrapper, the less sweet, more bitter, and more complex the flavor. Minor ingredients, usually present at less than one percent, may include vanilla or vanillin (an artificial flavor) and lecithin, an emulsifier obtained from soybeans that enhances the chocolate’s smoothness and creaminess.

Here, then, are the three major components of a quality chocolate bar, together with their aliases. My preferred names (and I wish the world would standardize upon them or their translations) are in boldface.

• Chocolate liquor, cacao, cacao mass, cacao paste, or cacao liquor: By any of these names, this is the “raw material” of chocolate: ground-up cacao beans. It is often referred to as a paste or liquor because the friction of grinding melts the dense fat, and what comes out of the grinding machine is a glistening brown paste. The percentage of chocolate liquor in a bar is the percentage of actual chocolate.

• Cocoa butter or cacao butter: The fat from the cacao bean.

Butter is a more appealing word than fat, but don’t let it fool you into thinking it comes from a cow. Not even a brown cow.

• Cocoa, cocoa solids, or cacao solids: The brown, solid parts of the cacao beans, ground to a powder.

That’s it. Just three main players in the cast of characters: whole chocolate, its fatty part, and its solid part. If the cocoa butter and the cocoa solids are separated, they can be combined with sugar in various proportions to make a variety of different “chocolates.”

“Unsweetened chocolate” or “baking chocolate” is simply chocolate liquor that has been poured into molds and solidified by cooling. The FDA requires that it contain between 50 percent and 58 percent fat, a leeway of 4 percent on either side of natural cacao beans’ fat content of 54 percent.

In addition to its 54 percent content of fat, chocolate liquor contains about 17 percent carbohydrates, 11 percent protein, 6 percent tannins, and 1.5 percent theobromine, an alkaloid similar to caffeine and a mild stimulant. It also contains less than 1 percent of phenylethylamine, a somewhat stronger stimulant similar to amphetamine, known in certain quarters as “speed” or “uppers.” Other minor ingredients of chocolate are polyphenols, antioxidants that counteract harmful free radicals; and anandamide, a close relative of tetrahydrocannabinol (THC), the active ingredient in marijuana. But note that the amounts of all these physiologically active and psychoactive chemicals are minuscule. Moreover, the “highs” they produce are short-lived and not very lofty.

Before a batch of molten chocolate is ready to be poured into bar molds, it is usually conched: kneaded and massaged in heated tanks for anywhere from two to six days while chemical changes take place, flavors develop, moisture and bad flavors such as acetic acid evaporate, and the sugar is reduced to smaller particles, leading to a smoother texture. (The word conch comes from the shell-shaped blades of the early conching machines.)

Chocolate factories can squeeze the fat out of whole cacao, thus separating the fat from the solids. The fat-free solids are commonly and quite properly called cocoa and are sold as such. The manufacturer often adds some of the separated fat to a chocolate-bar mix in order to adjust the smoothness and melting properties of the ultimate bar. Because this added cocoa butter changes the cacao’s natural 54-to-46 ratio of fat to solids, it is listed separately as an additive in the list of ingredients. The percentage number on the wrapper includes this added fat.

In 2003, as a result of squabbling among Belgium, England, France, and Germany with anxious input from Switzerland, the European Union ruled that up to 5% of the cocoa butter in chocolate may be replaced with other vegetable fats. That’s why many of the best European dark chocolate bars brag about their high cacao content by printing their percentage numbers in huge type on their wrappers.

If you’re truly interested in upping your snob quotient, taste as many serious dark chocolate bars as you can find (or afford; they’re not cheap). Use the percentage of chocolate liquor only as an initial indicator of how sweet or bitter you like your chocolate. Then try a variety of bars in that range to find your favorites in brittleness or “snap,” flavor, and mouth feel.

Learn the cacao percentages and countries of origin of a few bars, and at every opportunity, talk about them in terms taken from a wine magazine (bouquet, fruit, finish, and so on). Use the word cacao (not cocoa) as often as possible, and you can be as good a chocolate snob as any of your friends.