Where does poop go when I flush the toilet?

The stuff you flush down the toilet doesn’t go to the ocean. At least not right away, unless it rains and the extra liquid seeping into pipes overwhelms the sewage system. 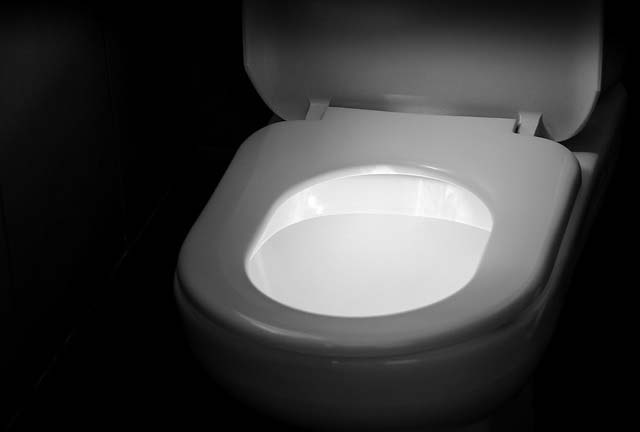 If you have a septic tank buried in your backyard somewhere, the waste and water go there. The solid wastes sink to the bottom of the tank and eventually get reduced in bulk by anaerobic bacteria; the liquid gets spread underground to soak into what’s called the “drainfield”in other words, your backyard.

If you’re connected to a sewage system, your toilet waste goes on a little ride. After coursing through a pipe inside your walls and under your floor, the waste ends up in a sewer pipe underneath your street. If you want to know exactly where, look for the manholes, they’re the way crews get into the sewer if a problem arises.

After traveling through a succession of progressively larger pipes, your waste will end up in a sewage treatment plant, where it joins millions of gallons of other sewage. There it goes through several stages:

Letting grit settle out. “Grit” refers to anything that sinks, like sand, gravel, coffee grounds, eggshells, and much of the stuff that people grind up in their kitchen garbage disposals. The method is simple: in a tank, air jets bubble up scum and other lighter stuff and allow heavier stuff to hit bottom. A giant screw in the bottom of the tank continuously pushes the grit out of the tank.

Settling out the sludge. In the next pool, the sewage sits for about two hours, allowing sludge solids to settle to the bottom of the tank. What look like extra-long bicycle chains glide bars across the top of the tank to skim off scum. A similar system is working unseen at the bottom of the tank, scraping sludge to a low spot on one end, where a pump sucks it out and sends it for digestion, dewatering, and disposal into landfills, farmland, or fertilizer bags in your local nursery.

In the next tank, the wastewater gets dosed with tons of oxygen, about 140 tons a day. While a huge blender blade stirs the oxygenated mixture, the plant adds “activated sludge” enriched with microorganisms. This sludge acts like yeast in bread dough, with its organisms multiplying like microscopic rabbits in the oxygen-rich water and gobbling up most of the remaining pollutants.

After its two hours in the oxygenation tank, the water moves into a big round pool called a secondary clarifier. As the water flows through, giant scrapers rotate constantly along the bottom, moving solids out of the tank. Most of those solids are the microorganisms from the previous step, which are shipped back to the oxygenation tank to culture the next batch of wastewater.

The waternow clear and smelling like wateris doused with chlorine to kill pathogens, then doused with sulfur dioxide to neutralize the chlorine’s negative effects on wildlife.

Then, finally, it’s dumped into a public waterway.