Salmonella infection accounted for 4,533 of these, a little more than 42 percent. Salmonellosis is actually caused by a group of bacteria. The most common serotypes in the United States are called Salmonella enteriditis and Salmonella typhimurium. The name has nothing to do with fish, it’s named after the U.S. scientist who first isolated it, and people figured out more than 100 years ago that it caused illness. Salmonella are gram-negative bacteria that move around with the aid of “flagella,” hair-like filaments attached to each cell.

Many people are extremely conscientious about washing off the cutting board on which they cut chicken before placing anything else on the board. They’ve heard that raw chicken can contain salmonella, and they’re right, salmonella can be transmitted this way, but it’s not the only way. 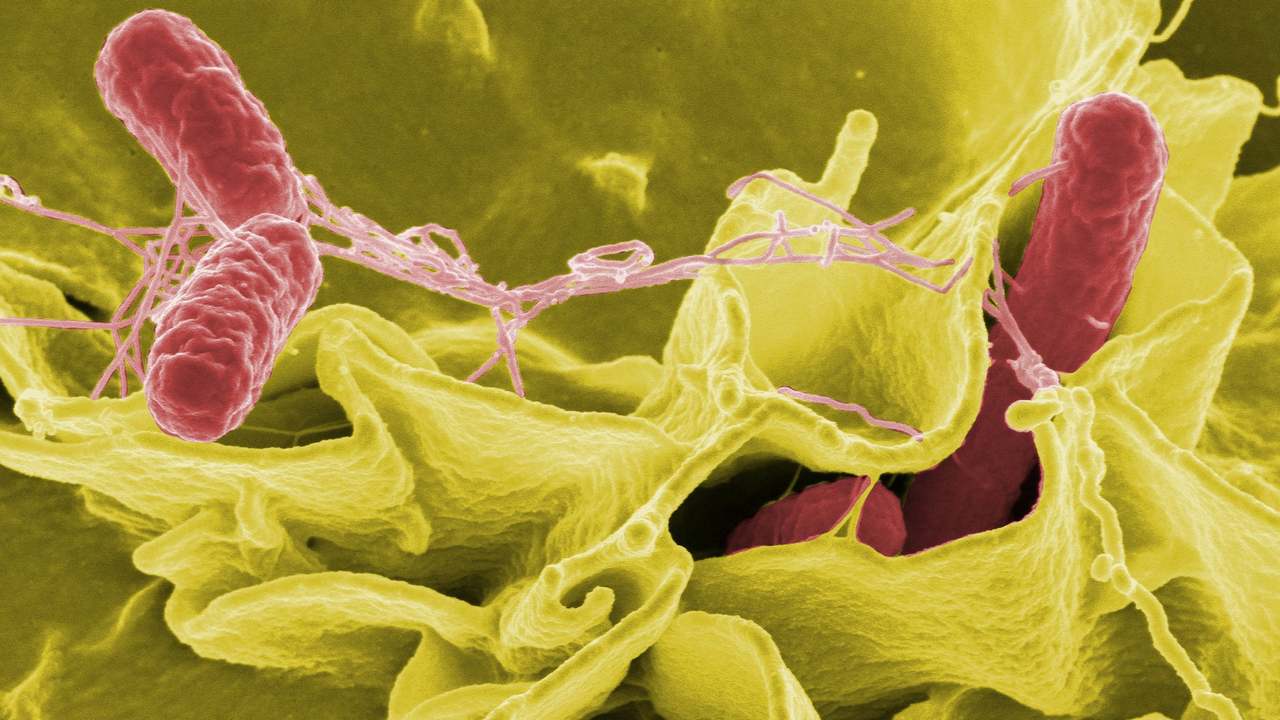 It is usually transmitted by contact with feces of other people or animals. It can be transmitted, for example, from the hands of a food handler who forgot to wash his hands after he used the toilet. (Of course, the food handler has to be infected himself to transmit the disease.) Since animal feces can also contain the bacteria, edible meat and poultry can be infected in this way, and salmonella from infected raw meat or poultry can move, via hands or cutting board, to vegetables, which, if eaten raw, could cause disease. Pet birds and reptiles can be infected, too, and handling them can transmit salmonella.

Another common source of salmonella is raw or undercooked eggs, because salmonella can infect the ovaries of hens, which then lay eggs containing the bacteria (the hens don’t show any symptoms of disease, so you can’t tell a healthy one from one whose ovaries are infected). At any given time, only a few hens are infected, and contaminated hens lay mostly uninfected eggs, with only an occasional contaminated one. In the northeastern part of the United States, where the disease is most common, 1 in 10,000 eggs is infected.

However, since eggs in commercial or institutional kitchens are often pooled, the bacteria can easily spread to eggs that were uninfected. The CDC estimates that about 1 in 50 consumers per year might be exposed to a contaminated egg, but of course of those exposed only a minority will get sick. Even if you are unlucky enough to have an infected egg in your refrigerator, cooking destroys salmonella, so cooked eggs are harmless. Pasteurization also kills salmonella. There isn’t any easy way to tell if an egg is infected, they look and taste the same as uninfected eggs.

What could be healthier than raw sprouts? Sprouts, alfalfa, radish, and clover, are practically a synonym for health food. But since 1995, raw sprouts have emerged as a carrier of salmonella infection. Often the seeds themselves are infected, so no amount of careful handling by you or anyone else will help, and even growing them yourself won’t guarantee that they’re not contaminated. The Food and Drug Administration has this simple advice for people who want to avoid food poisoning from raw sprouts: don’t eat them. Most people will find this a small sacrifice.

Salmonella infection rarely has serious consequences. The number of cases reported to the CDC varies from year to year and averages about 8,000. But the CDC usually gets notification only of widespread public outbreaks. There are probably about 30,000 more infections per year that are not reported and never even come to the attention of a doctor, since the disease is almost always mild and transitory, a few days of unpleasantness with diarrhea, abdominal cramps, and sometimes a slight fever. Salmonella poisoning kills about 500 people a year, about the same as the number of people who die in car accidents over Thanksgiving weekend. Most of the deaths are among the elderly in nursing homes. Infants and the immunocompromised are also at risk for serious illness.

So the danger of salmonella infection should not be exaggerated, but it shouldn’t be minimized, either, and sensible steps should of course be taken against transmitting it. What can you do to avoid infection? First, and most important, wash your hands often, especially after using the toilet and especially while you are preparing food. Eating only pasteurized foods or thoroughly cooking all food will kill any salmonella bacteria in it and render them harmless. But there are some foods you still want to eat raw. Keeping salad vegetables separate from meat is also an easy step to take. If you prepare meat on a cutting board, you’ve undoubtedly heard this advice before, wash the cutting board with soap and hot water before you cut vegetables on it.

The seriousness of a salmonella infection depends on the number of bacteria you ingest. Since normal refrigerator temperatures prevent the bacteria from reproducing, keeping eggs refrigerated can prevent disease even if you eat an egg that has some salmonella bacteria in it. That goes for foods that contain eggs as well. Salmonella can be transmitted on the shells of eggs, but since the 1970s, procedures for washing and inspecting eggs have made this extremely rare.

In any case, you should discard any cracked or dirty eggs. Wash your hands and cooking utensils after contact with raw eggs. When you cook eggs, eat them right away, keeping them warm for more than two hours is not a good idea. Homemade ice cream and eggnog are often made with raw eggs, the only way to avoid a possible infection from these foods is to avoid eating them. Commercial eggnog and ice cream are made with pasteurized eggs, and these products have never been linked to salmonella infection, so the greatest danger in eating them is their high fat content. Although it is probably easier said than done, you should avoid unpasteurized raw eggs in restaurants in things like hollandaise sauce and Caesar salad dressing. Restaurants should, but don’t always, use pasteurized eggs in recipes that call for pooling of raw eggs.

Some states require refrigeration of eggs from producer to consumer, but not all do. The U.S. Department of Agriculture now tests breeder flocks that produce egg-laying chickens to make sure they are not infected, and the Food and Drug Administration has issued guidelines for handling eggs in restaurants and other public food preparation facilities.