How does dirty Hospital Laundry increase the risk of disease transmission?

Dirty laundry, as you might have guessed, certainly contains plenty of germs, including many that are pathogenic.

Any cloth that touches your body is likely to become contaminated with whatever organisms are on your skin, and we know what can happen in the special case of underwear. But the Centers for Disease Control agrees with Procter & Gamble’s panel of experts: the risk of transmitting disease by the contaminated laundry route is negligible in your home. Even in hospitals, where the risks are obviously greater, there are very few reports of diseases linked to soiled fabrics, and the overall risk of such transmissions is vanishingly small.

The clothing of health care workers, of course, presents problems not ordinarily encountered by the rest of us. Blood, skin, stool, urine, vomit, and other body fluids and tissues commonly contaminate the clothing of hospital workers, and there have been cases in which disease transmission has apparently occurred from handling these clothes. 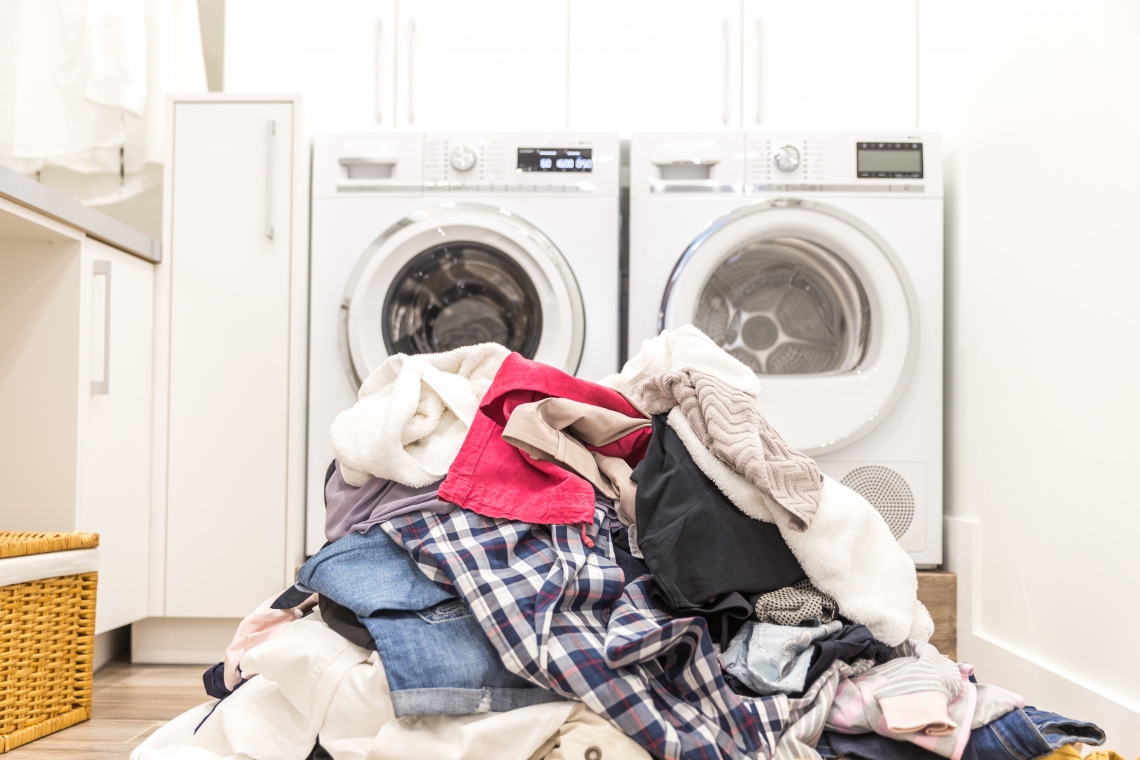 Usually the reason is that they were handled improperly, shaken, for example, causing pathogens to become airborne. Salmonella, B. cereus, hepatitis B virus, fungi, and scabies may all have been transmitted in this way, either by direct contact or by contact with airborne particles of lint from the laundry, even though reports of such incidents are unusual enough to warrant publication as articles in scientific journals, and their conclusions are uncertain enough that none of the authors could absolutely rule out transmission from some other source.

But the CDC doesn’t like to gamble, and on the minuscule chance that infected laundry and bedding might be a source of trouble in hospitals, they do offer some thoughts about how such materials should be handled. Some of their recommendations could be adapted for home use; others require special equipment or procedures that would be impractical, if not impossible, to use at home.

That health care workers’ clothes get contaminated with germs is indisputable. One study looked at those little white jackets that medical students wear and found that the sleeves and pockets were commonly contaminated. The most frequently found germs were the ones we all walk around with on our skin, including S. aureus, which can cause pretty awful disease if it gets into the wrong place. In general, students were more or less correct when they guessed how dirty their coats were, that is, their guesses correlated well with how contaminated they turned out to be. Nevertheless, they didn’t launder them much, and a large proportion of them wore them for weeks on end no matter how dirty they were. The authors of the study concluded that it might be a good idea if the hospital would take on the burden of providing clean coats from time to time, but they didn’t claim to show that anyone had caught anything from medical student coats, no matter how long they’d gone unwashed.

Washing this stuff is no simple matter. In a hospital, the laundry room has to be divided into two separate sections, one for receiving and handling dirty laundry and one for handling the material after it’s clean. In order to minimize the potential for contaminating the clean area with airborne stuff from the dirty area, the air pressure in the dirty area has to be kept lower than that in the clean area.

This prevents anything nasty from blowing out of the “dirty room” when you open the door. Laundry workers are supposed to wear protective gloves and clothing while handling contaminated fabrics, equipment should be maintained according to manufacturers’ instructions to prevent microbial contamination, and damp laundry shouldn’t be left lying in machines overnight. It used to be thought that laundry from isolation areas of the hospital (for example, wards in which TB cases are treated) should be kept separate from other laundry, but there is no evidence that this prevents disease, and the CDC now recommends that all laundry be handled in the same manner.

If you want to be really, really safe, the CDC provides detailed rules about how laundry should be handled in hospitals, and at least some of these procedures could conceivably be instituted at home. First, a health care worker has to collect the laundry, which is not as simple as it might sound. The laundry should not be shaken or sorted at the site where it is collected. Instead, it must be placed inside a bag, sealed to prevent leakage, and then transported. This transportation can be done either by a cart or through a laundry chute, but if a chute is used, it has to be designed and maintained properly, and you can’t throw laundry down it that isn’t bagged properly, doing that might make infective material airborne and contaminate the laundry room at the other end of the chute.

Laundry has to be sorted before washing. In a hospital, this has to be done because it may contain “sharps”, discarded needles, lancets, or other medical waste that could carry infection, and might also contain patient belongings that could damage laundry machines. The procedure also reduces the possibility of recontamination of clean material. You would probably not be likely to find discarded medical waste in home laundry, but you might well find hard objects left in pockets or accidentally picked up with the dirty sheets and pillowcases. In hospitals, workers wear protective clothing and gloves of sufficient thickness to minimize penetration by sharp objects. It is difficult to conceive of an ordinary person, no matter how concerned about germs, getting him or herself up in such garb in order to pop a load of clothes into the washing machine.

All these procedures, and we haven’t even gotten to actually washing the stuff yet. Well, here we go. Laundry in hospitals can be disinfected and rendered “hygienically clean,” although not sterile, by laundering it. That is, the material will be free of most harmful germs, but you can still find microbes on it if you look hard enough.

How do clothes get hygienically clean inside a hospital washing machine? Through a combination of factors, some of which can be duplicated in a home laundry. Just the act of washing in ordinary water removes quite a few germs. Soaps and detergents loosen soil, removing germs along with it, and some detergents have germ-killing properties as well. Hot water kills germs, as we know, but it has to be really hot. Most home water systems keep the hot water at about 140° F, but for hot water to be an effective disinfectant, it has to be raised to 170° F, and it has to stay at that temperature for at least 25 minutes. This just isn’t going to happen in most homes, and even if you could manage to attain such a temperature, there are plenty of clothes you wouldn’t want to wash in water that hot. Even in hospitals, keeping water that hot may not be practical, laundries are typically the largest water users in hospitals, and heating water to such a high temperature can be a very expensive proposition, amounting to as much as 15 percent of the hospital’s energy bill.

Fortunately, it isn’t necessary to have water that hot, even in a hospital washing machine, if you use the right detergent and bleach combination. Chlorine bleach is a very good disinfectant, and using it will undoubtedly make your laundry less germy. It can also make a mess of your clothes. But there is an alternative method of bleaching called oxygen activated. (Remember that “patented oxygen bleaching system” that Procter & Gamble brags about in its Tide detergent?) This method doesn’t involve chlorine, but is still a quite effective antimicrobial and is much easier on clothing. The temperatures reached in dryers, and when clothes are pressed, probably also contribute to the elimination of some germs.

Despite all this, there is at least one recent study that appears to demonstrate that washing surgical scrubs at home is just as healthful as having the hospital laundry go though these complicated processes. The study, published in the American Journal of Infection Control, showed that washing clothes at home produced no increase in surgical site infections. While the Association of Perioperative Registered Nurses opposes this, the CDC says the question is undecided. On the basis of his own results, the author concludes that there is no reason to have special laundries handle these garments.

Should you disinfect the washing machine and dryer? No. If you follow the right laundering procedures, there is absolutely no advantage in scrubbing the tubs and tumblers of these machines with anti-bacterials.

There are some things you can’t throw into the washing machine, so dry cleaning should take care of sanitizing those, right? Probably not. Dry cleaning, a process that uses solvents such as perchloroethylene instead of water, is ineffective in reducing the numbers of bacteria and viruses on contaminated clothing. If the dry-cleaned articles are pressed with a hot enough iron, however, that does help remove some germs.

Are you enough of a mysophobe to concern yourself with the germ carrying capacity of your mattress? Of course, mattress covers can be laundered, but how about the mattress itself? Can it get contaminated, and if it can, what should you do about it? In hospitals, particularly in burn wards, contamination of mattresses can be a problem. Wet mattresses are a particularly comfortable home for colonies of bacteria, and any mattress that is wet or visibly stained should be replaced. Mattress covers should be replaced, not repaired, when torn. Pillows and pillowcases can both be laundered when soiled.

We’re talking about hospital procedures here, and while you could certainly implement these practices at home, they are unlikely to be a significant contributor to good health.