Why does Aluminum Cookware Corrode and become Discolored in the Dishwasher?

Most dishwasher detergents for machines, as opposed to the dishwashing detergents for hand-washing dishes, contain the highly alkaline compound sodium carbonate, also known as good old-fashioned washing soda, not baking soda, which is sodium bicarbonate.

Alkaline chemicals are needed in the dishwasher because they gobble up grease, transforming it into soap. A soap is one of a class of chemical compounds formed by the action of an alkali on a fat. A detergent, on the other hand, is a more modern synthetic compound specifically designed to do soap’s cleaning chores. That difference doesn’t stop many people from calling all of today’s household detergents “soaps” anyway. 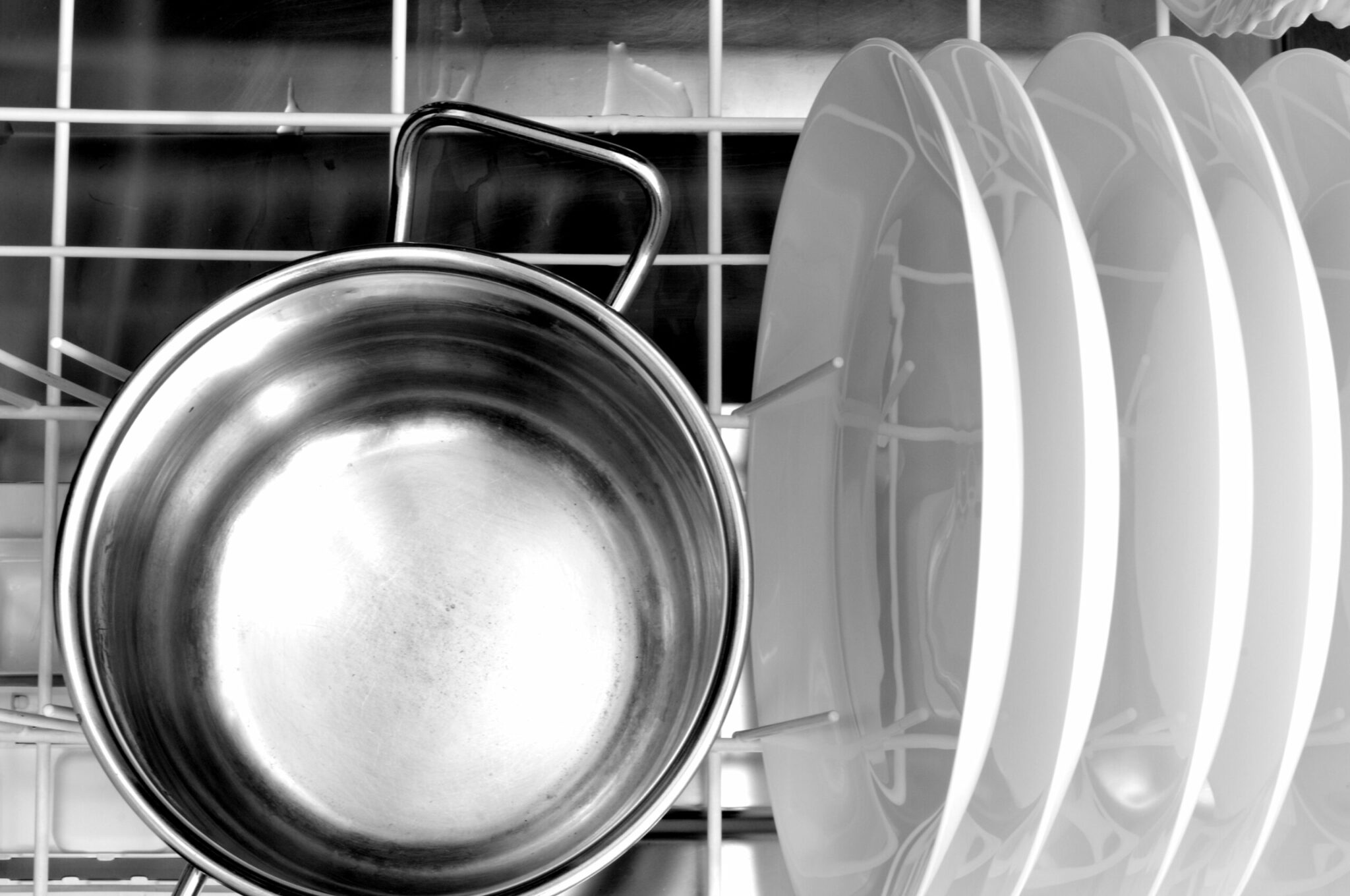 We tend to think that if a chemical is attacking and dissolving a metal, it must be an acid. And that’s generally true; a strong enough acid could devour a Humvee and spit out the tires. But aluminum is an unusual metal in that it is attacked by both acids and alkalis. (It is arnphoteric .)

So the alkaline sodium carbonate in the dishwasher detergent does indeed attack aluminum, at the very least eating deeply enough into the surface to make it dull and pewter-gray with aluminum compounds. For this reason most manufacturers of quality aluminum cookware advise against putting it in the dishwasher.

There’s a second aluminum-damaging phenomenon going on in your dishwasher if the aluminum utensil happens to be touching another metal, which will most likely be stainless steel.

Whenever any two different metals, in this case aluminum and what is essentially iron, are in contact while immersed in an electrically conducting liquid, an electrical (more properly, an electrolytic) reaction takes place that attacks one of the two metals, in this case the aluminum, corroding its surface and dulling it. So if you insist on washing an aluminum utensil in the dishwasher, make sure it isn’t touching any other kind of metal.

For reasons that are more elaborate than we want to get into here, iron atoms hold on to their electrons more tightly than aluminum atoms do. (Iron is said to be more electronegative than aluminum.) Thus, if the two metals happen to be in contact within an electrically conducting liquid (an electrolyte) such as dishwasher detergent dissolved in water, the iron atoms will actually steal electrons from the aluminum atoms. This transfer of electrons constitutes a flow of electric current, with the electrolyte completing the circuit.

The now-electron-deficient aluminum atoms (aluminum cations) want to regain their normal complement of electrons by reacting with something, anything, that has electrons to donate. The surface of the aluminum metal therefore reacts with negative ions (anions) in the solution, forming a dulling layer of an aluminum compound, most often aluminum oxide.