Why Does Frozen Food Get Freezer Burn?

Freezer burn” has to be one of the more ridiculous oxymorons going. But take a good look at that emergency pork chop that’s been in your freezer much longer than you ever intended. Doesn’t its parched and shriveled surface look as if it had been seared?

The dictionary tells us that seared doesn’t necessarily refer to heat; it means withered or dried out, no matter what did the drying. Notice that the patches of “burn” on your forlorn pork chop are indeed dry and rough, as if all the water had been sucked out.

Can the cold alone make frozen foods dry out, especially when the water is in the form of ice? 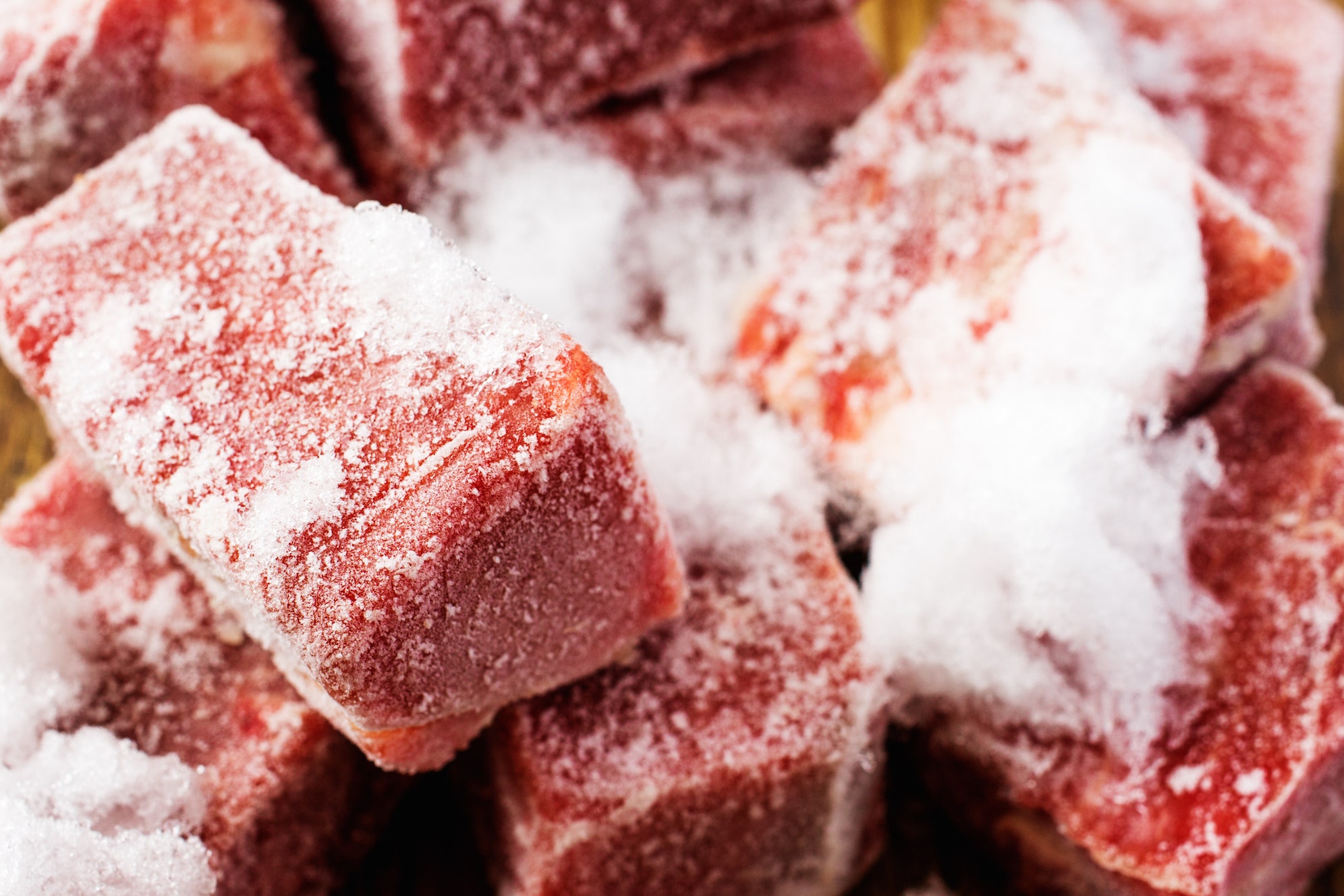 Yes indeed. While your hapless chop was languishing in the freezer, something was stealing water molecules from its icy surface.

Here’s how water molecules, even when firmly anchored in solid ice, can be spirited off to another location.

A water molecule will spontaneously migrate to any place that offers it a more hospitable climate. And to water molecules, that means a place that’s as cold as possible, because that’s where they will have the least amount of heat energy, and “all other things being equal”, Nature always favors the lowest energy.

So if the food’s wrapping isn’t absolutely molecule-tight, water will migrate through it, from the ice crystals in the food to any other location that happens to be the tiniest bit colder, such as the walls of the freezer.

That’s why non-frost-free freezers have to be defrosted. The net result is that water molecules have left the food, and the food’s surface is left parched, wrinkled, and discolored. Burned-looking.

This doesn’t happen overnight, of course; it’s a slow process that takes place molecule by molecule. But it can be slowed to practically zero by using a food-wrapping material that blocks wandering water molecules. Some plastic wraps are better at this than others.

Moral No. 1: For the long-range keeping of frozen foods, use a wrapping material specifically designed for freezing because of its impermeability to migrant water molecules. Best of all are vacuum-sealed, thick plastic packages like Cryovac, which are quite impermeable to water vapor. Freezer paper is obviously good; it has a moisture-proof plastic coating. But ordinary plastic food wraps are made of various materials, some better than others. Polyvinylidine chloride (Saran Wrap) is the best, and polyvinyl chloride(PVC) is also good. Read the fine print on the plastic wrap package to learn what it is made of. Thin polyethylene food wraps and ordinary polyethylene food-storage bags aren’t very good, but polyethylene “freezer bags” are okay because they’re unusually thick.

Moral No. 2: Wrap the food tightly, leaving no air pockets. Any air space inside a package will allow water molecules to float through it to the inner wall of the wrapping where it is colder, and settle there as ice.

Moral No. 3: When buying already-frozen foods, feel for ice crystals or “snow” in the space inside the package. Where do you think that water (to make the ice) came from? Right: the food. So either it’s become dehydrated from being kept too long in a loose package or it’s been thawed, which releases juices from the food, and then re-frozen. In either case, it’s been abused and, while still safe to eat, will have an off flavor and poor texture.