Why is Carbon Monoxide used to give Tuna a Bright Red Color when it is Poisonous?

Carbon monoxide is lethal. But not in the case of monoxide-treated tuna.

First, for the uninitiated, yellowfin tuna, which may be listed on the menu as maguro, the generic Japanese word for tuna, is not to be confused with yellowtail, a kind of amberjack, or with toro, the prized fatty belly of the bluefin tuna. Nigiri sushi is a filet of the raw fish on a pillow of vinegared rice.

Every year in the United States, several thousand people are treated in hospital emergency rooms for carbon monoxide poisoning. Some two hundred per year die from carbon monoxide given off by improperly vented gas-burning appliances such as furnaces, ranges, water heaters, and room heaters, while many others are killed by automobile engines running in enclosed spaces. 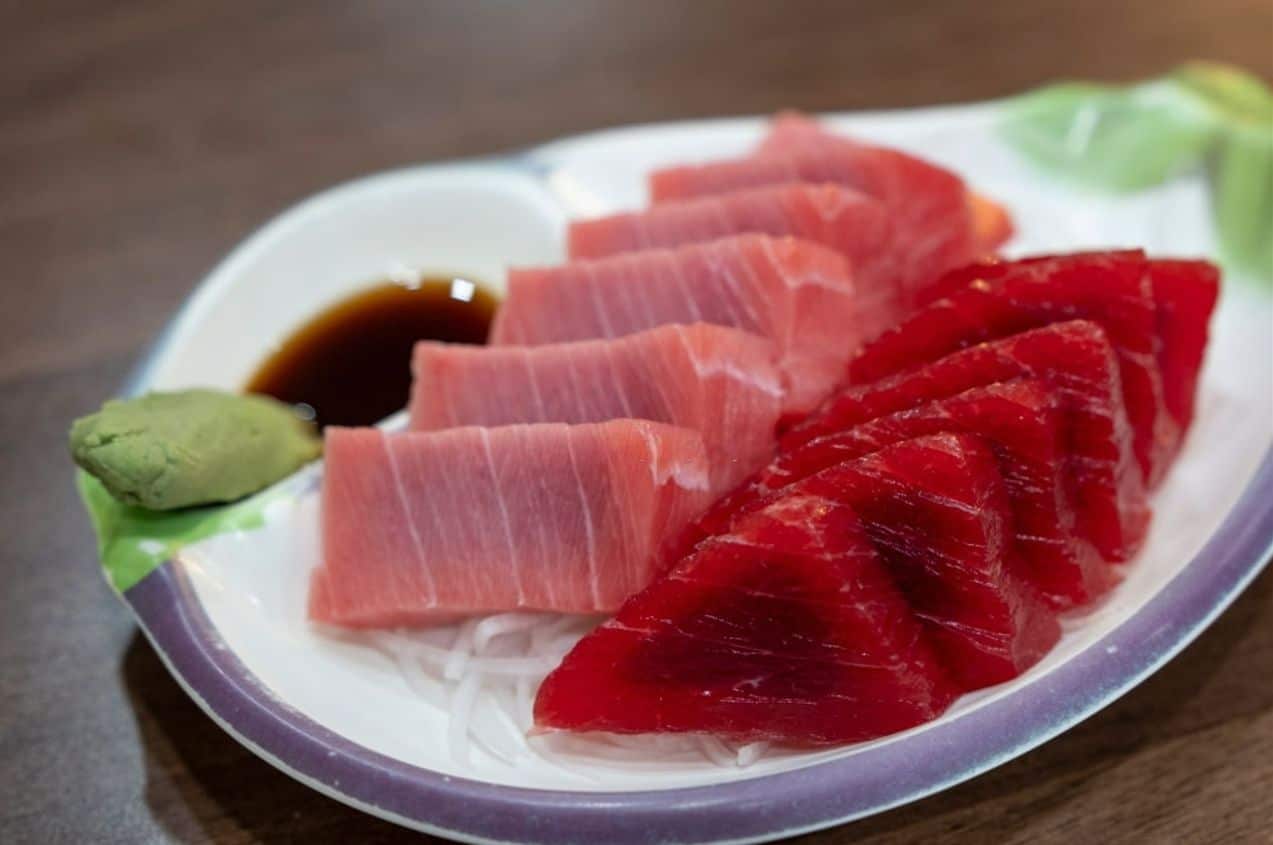 Carbon monoxide gas is particularly toxic because it goes from the lungs into the bloodstream, where it replaces the oxygen in the blood’s oxyhemoglobin. destroying its ability to deliver oxygen to the body’s cells. And the organs most likely to crash from oxygen starvation are the heart and brain.

All devices that burn carbon-based fuels, including gasoline burning automobiles, gas-burning furnaces, kerosene burning heaters, and even charcoal-burning hibachis, emit carbon monoxide because their fuels don’t burn completely; the combustion process is inevitably inefficient. Instead of burning all the way to carbon dioxide, CO2 (two oxygen atoms for every carbon atom), some of the carbon atoms in the fuel can’t find that second oxygen atom and end up as carbon monoxide, CO. That’s why these devices should never be operated in an enclosed space: the inevitable CO can build up to a lethal concentration.

Eating raw tuna that has been exposed to carbon monoxide gas is another matter entirely. In this case you’re not breathing the gas, and for that matter you’re not even eating it. Gases, of course, are ephemeral, and the carbon monoxide doesn’t hang around on the fish after it has done its job of brightening its color. The FDA has declared carbon-monoxide-treated tuna to be GRAS, generally regarded as safe, because residual carbon monoxide on the fish is virtually absent.

But why should a food processor do such an outlandish thing as exposing fish to a poisonous gas? Well, follow the money. The red color of freshly cut tuna can change within a few days to an unappetizing brown. Consumers don’t like brown fish and are willing to pay more for “fresher-looking” red. Hence, the cosmetic application of carbon monoxide “rouge.”

Tuna flesh, like the flesh of many land animals, contains myoglo bin, a pigmented protein that stores oxygen in the muscle tissue. Myoglobin changes color, however, depending among other things on how much oxygen is available to it. The dark, purplish-red color of freshly cut tuna is due to deoxyrnyoglobin, which in air changes first to bright red oxyrnyoglobin and then to brown metmyoglobin. Tuna purveyors must therefore rush their tuna from the boat to the sushi bar while it is still in the red oxyrnyoglobin stage.

Tuna cosmetologists can of course buy their carbon monoxide gas in steel tanks, like many other gases. But there’s a cheaper way to get it: by burning wood. Because of the incomplete combustion process described above, wood smoke contains carbon monoxide.

The tiny particles that make smoke smoky can be filtered out along with the tarry chemicals that give smoke its flavor, leaving a mixture of gases, carbon dioxide, carbon monoxide, nitrogen, oxygen, and methane, called filtered smoke or tasteless smoke. It can be used instead of pure carbon monoxide to brighten the fish’s color. The justification is made that tasteless smoke can be no more harmful than “whole smoke,” traditionally used to make smoked fish and other meats. According to the FDA, however, foods treated with filtered smoke may not be labeled “smoked,” because the expected smoked flavor isn’t there.

The irony in all this is that the color of untreated tuna is not an indicator of its wholesomeness. Myoglobin’s color changes take place long before the fish has begun to deteriorate. The association of bright color with freshness is all in the consumer’s mind.

So is there anything wrong with carbon-monoxide-treated tuna? Not because of any presumed health hazard. But there will always be a few rascals who try to conceal over-the-hill fish by touching up its color, and that is an actionable offense according to the FDA. Moreover, research by the Food Science and Human Nutrition Department of the University of Florida has shown that dangerous time-induced spoilage can continue in monoxide-treated fish even though the color remains bright, perhaps luring unsuspecting diners to disaster like a gussied-up siren.

Because of the possibility of abuse by tuna suppliers, several countries prohibit carbon-monoxide-treated fish. Sushi-conscious Japan has outlawed it since 1997, while the European Union has begun to enforce its ban only since early 2004.

Your best resource as a consumer is, as usual, your confidence in your source. You shouldn’t eat raw fish in any but the most trustworthy sushi establishments anyway, for reasons unrelated to carbon monoxide. If a given restaurant would never sell contaminated or spoiled fish under other circumstances, it would certainly never sell contaminated or spoiled fish that has been cosmetically enhanced. Fresh tuna has a clean flavor, relatively firm texture, and of course, no odor, no matter what its color. So if in doubt, just shut your eyes and let your mouth and nose be your guides.

And remember that yellowfin tuna varies in color from pink in smaller fish to deeper red in larger fish, so once again the color itself is no indication of freshness.

If your fish is a bright, unnatural-looking watermelon red, it has probably been treated with carbon monoxide or filtered smoke. But there is no known health hazard if the fish itself is fresh and clean.