The pocketknife is obviously a recent invention, right? After all, the technological skill required to craft a workable fold-up knife must be a product of the industrial age. Besides, what need would men have had for a pocketknife in the days before pockets? Well, don’t be surprised if you come across a rusty, time-worn pocketknife among the display cases of a museum, a tool, say, 2,000 years old!

Knives themselves, of course, have been with us since the Stone Age. Primitive man used cutting tools and weapons made from stone and flint, and later, from bronze and iron. The ancient Romans were skilled metalworkers, spreading their craft throughout their Empire, and the Romans left us the world’s first known fold-up pocketknives.

The Roman implements were about three inches long when shut, fashioned without a spring or “nail nick”, the groove used to open the blade. The handles were often elaborately carved. One pocketknife surviving from the first century features an ivory handle skillfully carved into the shape of an armored gladiator. Another Roman knife, now in the British Museum, had the carver’s name scratched into the handle. 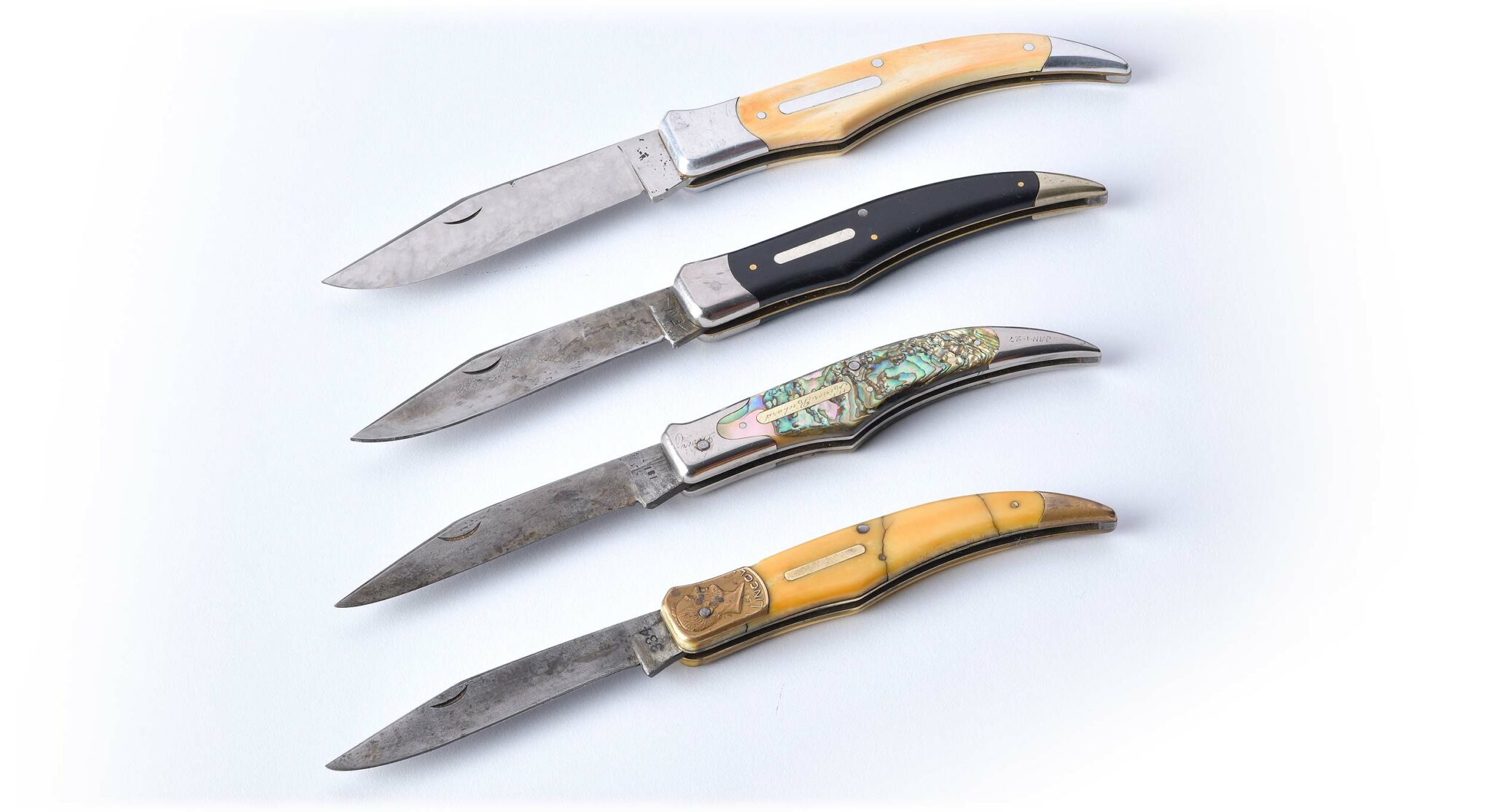 Table knives did not exist in the Middle Ages, each diner was expected to bring his own knife which between meals, doubled as a dagger. Nor did innkeepers provide table cutlery. Affluent travelers often carried sets of elegant tableware among their baggage. Obviously, the pocketknife would have been an ideal all-purpose tool for the medieval European, but few pocketknives were in existence at the time. Most men preferred an unfolding knife in a scabbard to a pocketknife, owing either to the lack of good spring knives or to the shortage of pockets.

Until the eighteenth century, the only kind of pocketknife generally available was the jackknife, a heavy tool with one blade that closed into a groove in the handle. Then cutlerers began using springs to secure the blade in both the open and closed positions, providing a safer, firmer tool. From that time on, pocketknife manufacture became known as spring knife cutlery.

As the craft improved, multi-bladed tools began to appear, the penknife by far the most important. No, penknife, is not, strictly speaking, interchangeable with pocketknife. A penknife was a specialized pocketknife with one-blade opening at each end of the handle. The smaller of the two blades was used to trim and sharpen quill pens.

Throughout the eighteenth and nineteenth centuries, anyone who wrote had to own a penknife, and spring knife cutlery became a major industry in Europe and the United States. The penknife was the premiere product of the cutlerer’s craft, for the fitting of a spring knife demands highly skilled work. The blades were made from high-grade steel, tempered slightly harder than table knives. The more expensive models were finished by jewelers, with handles fashioned from silver, ivory, pearl, horn, ebony, and tortoise shell. An American cutlery catalogue from 1893 lists some 1,500 pocketknife models, which might suggest both the size of the industry and the variety of product available at the time.

Since at least the fourteenth century, the English cutlery industry had been centered around the city of Sheffield, while German knife makers from Solingen have long excelled at their craft. It was nineteenth-century Sheffield cutlerers who began fitting pocketknives with various other tools, among them buttonhooks, files, leather borers, tweezers, gimlets, saws, and implements curiously known as “castrating blades.” One interesting Sheffield creation sported both a pistol and a dagger.

The jack-of-all-trades knife, often known as the sporting knife, is today the most popular kind of pocketknife, fitted with nail files, clippers, scissors, corkscrews, forks, spoons, you name it. Special sporting models have been designed for fishermen, engineers, and campers, some combining a tool chest of implements into one handy pocketknife.

The Norfolk Sportman’s Knife, manufactured in 1851, was fitted with seventy-five blades, and took two full years to manufacture. But the award for pocketknife-blade proliferation surely goes to the Year Knife, made, like the Norfolk, by the world’s oldest cutlery firm, Joseph Rodgers and Sons Ltd. of Sheffield. This knife was introduced in 1822 contained 1,822 blades, and the firm has added one blade to the knife each year since. By now, of course, it’s far from a “pocket” knife. In 1977, this one-of-a-kind tool was fitted with its 1,977th blade, and the number will continue to match the year until 2000 A.D., when there will be no further room for blades in this gargantuan tool.

Though we have little need for the penknife today, pocketknives are still widely manufactured. In the recent past, young boys often carried pocketknives for whittling, or for games like mumblypeg; but after the teenagers of the 50’s took to carrying switchblade and pushbutton knives for less savory purposes, we no longer look kindly upon knife-wielding youths. Laws have been passed in some states stipulating the maximum length for a pocketknife blade, a longer blade is considered a deadly weapon.

If you number yourself among the ranks of pocketknife owners, take note: pocketknife manufacturers warn that their products demand constant attention. The spring joints of each blade should always be kept well oiled. And most important, a pocketknife blade should never be used as a screwdriver or lever. The blades are made from special steels tempered to maintain an edge, but not to withstand the strains of bending. If you need a screwdriver, you’ll have no trouble finding a pocketknife fitted with one.