The restaurant is such a seemingly natural and necessary institution that you’d suspect it’s been with us for as long as man has lived in cities. But the restaurant, as we know it today, is a surprisingly recent development. That’s not to say there weren’t any commercial eating places before our time. But the menu, with its choice of dishes, is only about 200 years old. The fact is that the diner or the coffee shop in which you may have lunch today offers more of a menu selection than the best of restaurants of the world did just a few centuries back.

The earliest forerunners of the restaurant were the medieval tavern and cookshop. The tavern customarily provided a daily meal, or “ordinary,” at a fixed hour and price, usually serving just one dish, much like a household cook providing dinner for a large family. Cook-shops primarily sold cooked meat for carry-out, but some did, on occasion, serve food on the premises.

By the 16th century, Englishmen of all classes were in the habit of dining out often. Local taverns offered fixed price meals, wine, ale, and tobacco, and served as a meeting place and informal clubhouse to boot. Entry was generally restricted to men. Among the more famous Elizabethan taverns in London were The Falcon, a popular haunt of actors, and The Mermaid, oft frequented by William Shakespeare. 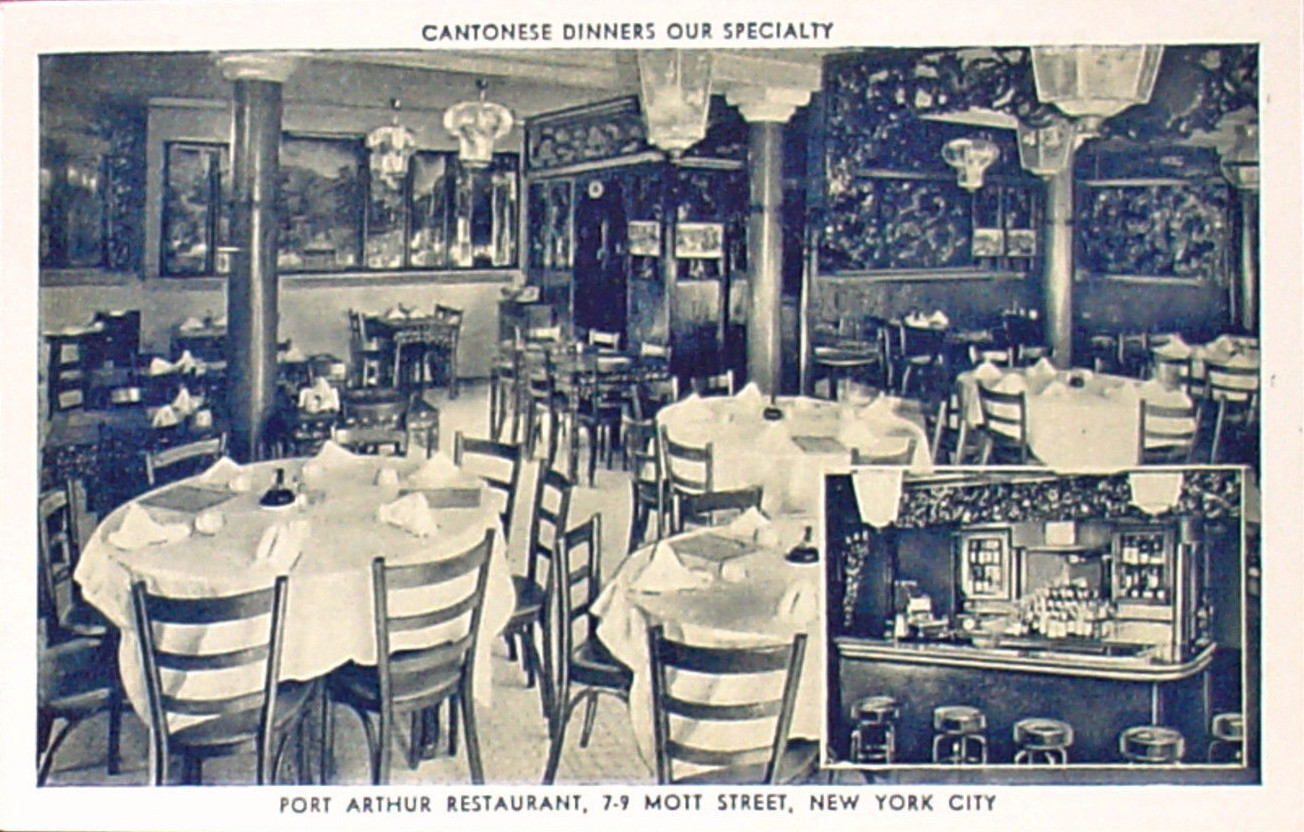 Beginning in England around 1650, the coffee house began taking over many of the tavern’s social functions. At first, the coffee house served only coffee, tea, and chocolate, all new arrivals to Europe. Then, the coffee house began providing wine, ale, and occasional hot meals. Another attraction was its supply of gazettes and newsletters regularly kept on hand for coffee swillers on their way to and from work. The clientele evidently was quite varied. An early eighteenth-century writer noted: “Some shops are a resort for learned scholars and wits; others are the resort of dandies, or of politicians, or again of professional newsmongers, and many are temples of Venus.”

For the first real restaurant, we must naturally turn to France. In 1765, a soup vendor named Boulanger opened a shop offering diners a choice of dishes rather than the then standard “ordinary” or “table d’hôte” dinner. The sign above Boulanger’s door read “Restaurants,” meaning “restoratives,” referring to the hot soups and broths available inside. The term restaurant or a derivative, was eventually adopted by many other nations and languages, although the word was not generally used in England until the late nineteenth century.

Hungry Parisians so enjoyed the new eating place that hundreds of similar establishments began springing up around the city, one offering close to 200 different meat dishes daily.

The first “luxury” restaurant to open its doors in Paris was La Grande Taverne de Londres, founded in 1782 by Antoine Beauvilliers. He was later to write a cookbook that became a standard work on French culinary art. According to the rotund gastronomist Brillat-Savarin, Beauvilliers’ establishment was the first to offer the four essentials of a fine restaurant: “an elegant room, smart waiters, a choice cellar, and superb cooking.”

Prior to the French Revolution, aristocrats maintained elaborate culinary staffs. When the aristocracy was driven from power, their cooks were likewise driven from the kitchen. Many sought work in restaurants or opened their own eating places. By 1804, there were well over 500 restaurants in Paris.

The great culinary establishments of 19th century Paris included the Wry, whose menu listed twelve soups, twenty-four fish dishes, fifteen beef dishes, twenty mutton specialties, and scores of side dishes. In 1869, the Wry was merged with a neighboring restaurant to form the Le Grand Vhfour, which still ranks near the top among French restaurants. Another great restaurant of the era, the Cafe Anglais, had a chef, Adolphe Duglare, who created the famed “Three Emperors Dinner” in 1867 for three well-heeled diners: Tsar Alexander II of Russia, his son, the future Alexander III, and William I, the future emperor of Germany.

Across the English Channel, by the end of the nineteenth century, the tavern had given way to the restaurant and the tea shop. The first teahouse opened in 1884, initially serving only teas. Later, it offered full meals. Teahouses became immediately popular among women, who for the first time had a place where they could eat in public without a male escort. Meanwhile, the lower classes turned to cheap eateries nicknamed “dives” due to their customary underground location.

In the United States, the earliest restaurants on record appeared in Philadelphia around 1680. The Blue Anchor Tavern was among the first. New York’s Fraunces Tavern, the site of George Washington’s farewell to his troops, was a popular watering hole in Revolutionary times, and still operates today.

The major American innovations in the field of eateries were the self-service restaurant and the automatic restaurant. The first self-service eatery in New York opened in 1885, but self-service establishments called cafeterias first became popular in San Francisco of the gold rush era.

The first automatic restaurant was opened by the Horn & Hardart Baking Company in Philadelphia in 1902, using mechanisms imported from Germany. Other American innovations were the specialty restaurant, the steak house and seafood restaurant, for example, the Pullman diner car, and the riverboat dining room.

By 1955, there were close to 200,000 eating places in the United States, one for every 800 persons, serving over 60 million meals a day with a staff of 1.3 million workers. Annual sales totaled about 9 billion dollars, making the restaurant the third largest retail business in this country. About 20 percent of all restaurant sales are now rung up on the cash registers of large American chains. These include Howard Johnson’s, McDonald’s, and other various hamburger drive-ins.

Today, the last word in gastronomic excellence is the guide published by the Michelin Corporation, a French tire firm. Michelin annually rates restaurants in thousands of towns and cities, awarding each from zero to three stars according to culinary quality. One star indicates good quality in its class; two stars suggests the restaurant is well worth a detour; and three ranks the establishment among the best in the world.

In a recent typical year, Michelin rated a total of 3,036 restaurants in France: 2,382 were rated but unstarred; 581 received one star; 62 received two stars; and only 11 restaurants earned the highest Michelin compliment of three stars. Five of these gastronomic palaces were in Paris, among them Le Grand Vhf our and La Tour D’Argent, the oldest surviving restaurant in Paris.

Many culinary connoisseurs, however, maintain that for the best in haute cuisine you’ll have to travel to Vienne, near Lyons, where you’ll find the renowned Pyramide. Other gourmets would name Paul Bocuse’s Auberge Pont de Collonges, near Lyons, as the world’s premier restaurant, or perhaps the Auberge de 1,111 in Illhausen, Alsace, or the Hotel Cote D’Or in Saulieu, near Dijon.

France, of course, has no monopoly on fine food. (Modern French cuisine, by the way, is Italian in origin.) Many gourmets avow that Chinese cuisine is actually the world’s finest, and excellent Oriental restaurants can be found in most cities of the world.

It’s been estimated that a New Yorker can dine out every night of his life until age sixty-five without visiting any establishment twice!

Among New York’s restaurants, Lutece and La Grenouille have been given high marks by Michelin, and certainly rank among the finest restaurants on this side of the Atlantic. Windows on the World, located atop one of the 110-story World Trade Center towers, has been lauded for its view more than its food. Reservations for dinner at the sky-high restaurant must sometimes be made weeks in advance. And any list of Gotham’s posh restaurants must include The Palace where dinner prices are, at this writing, $75 per person, without drinks!