“I believe,” wrote Alexander Graham Bell in 1878, “that in the future wires will unite the head offices of the Telephone Company in different cities, and a man in one part of the country may communicate by word of mouth with another in a distant place. I am aware that such ideas may appear to you Utopian.” 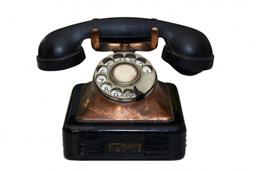 Well, if that’s the case, we’re now living in Utopia. Today, any American can pick up a phone and communicate not only with any other telephone in the country, but with almost any phone in the entire world, by direct dialing! The telephone has indeed brought the world to our fingertips and broadened the boundaries of our senses. Any temptation to underestimate the importance of the telephone in our lives can be quickly remedied by considering the efficiency of the modern postal system. In short, our lives would not be the same without that tool, toy, and infernal intruder, the telephone.

The man who wrote those prophetic words in 1878 is, of course, the individual most credited with the invention of the telephone. But Alexander Graham Bell was neither the first to conceptualize a voice-transmission device nor the first to design one. He was, quite simply, the first to patent one.

Before Bell began his work, other inventors in the United States and Europe had worked on systems for sound transmission to distant points. Philip Reis, laboring in Frankfurt in the 1860’s, devised a crude voice-transmission apparatus employing, at the transmitting end, a diaphragm structure that controlled an electric current. At the receiving end, the electric current governed a magnetized needle that vibrated a sounding board. But twenty years later, the German patent office decided that Reis’s apparatus was not a true “speaking telephone.”

Alexander Graham Bell was born in Scotland in 1847. He resided in England and Canada before moving at a young age to the United States. At twenty-five, he became a teacher of the deaf at a Boston school; and the next year, a professor of vocal physiology at Boston University. At the time, Bell lived with the Sanders family in Boston, serving as a private tutor for the Sanders’ deaf-mute child. He set up a workshop in the basement of the Sanders home for experiments that he hoped would lead to a “musical telegraph.”

Bell worked mainly at night in his basement laboratory, alone and in secrecy, for he knew that many other inventors were then engaged in similar experimentation. To guard his work, he traveled around Boston to buy his supplies in various stores. “Often in the middle of the night,” Sanders later wrote, “Bell would wake me up, his black eyes blazing with excitement.”

The inventor eventually lost his professorship and most of his students due to his preoccupation with telephone experimentation. Most of his friends who were familiar with his work urged him to abandon it. “If I can make a deaf-mute talk,” Bell countered, “surely I can make iron talk.” With money from his father-in-law and Sanders, Bell moved into a shop in Boston and hired an assistant, Thomas Watson, to pursue his dream of a “musical telegraph.”

On June 2, 1875, Bell first heard over a wire the twang of a clock spring operated by Watson in another room. He then knew he was close to harnessing undulating electric currents capable of transmitting speech. Bell’s rudimentary apparatus did, in fact, transmit speech the following day.

In February, 1876, Bell filed a patent for his invention. Meanwhile, Bell kept at work to perfect the device. On March 10, 1876, the first complete sentence ever transmitted by telephone reached Bell’s assistant in the basement: “Mr. Watson, come here; I want you.” Bell received his patent soon after, at the age of 29!

In his patent application, Bell called his invention “an improvement of the telegraph.” His wife suggested the name telephone, which had long been in use to describe many sound-transmitting devices, such as the “string telephone” invented by Robert Hooke in 1667. When his patent was filed, Bell probably had no idea how close others were to perfecting a similar device. Elisha Gray filed a caveat (notice of intent to file a patent) a few hours after Bell applied for his patent. And Thomas Edison had been on the verge of success with his own telephone, when distracted by other work. The stakes? Bell’s patent has been called the most valuable ever issued anywhere!

Western Union, the telegraph company, offered Bell $100,000 for his patent in 1887, but Bell rejected the offer. Western Union went on to develop its own telephone system based on the work of Gray and Edison, but an 1878 court decision ruled that Bell had sole patent rights to the telephone. Litigation involving over 600 separate cases dragged on for years. Finally, the Supreme Court upheld Bell’s claim for exclusive ownership.

By modern standards, the earliest telephones were crude, and conversations were barely intelligible. Many technological advances were necessary to produce the telephone we use today. In the beginning, phones were sold in pairs so that any telephone could connect with only one other.

Telephone lines were quickly strung throughout this country and Europe by Bell’s company and others. By 1890, there were already 225,000 phones in use here, and there were 26,000 in Great Britain, and 22,000 in Germany. The first pay telephone reared its coin-snatching head in 1889, in Hartford, Connecticut.

The first telephone directory was in the hands of New Haven phone users in 1878, listing only fifty names.

At first, various telephone companies competed directly with one another in the United States, without provisions for link-ups. Mergers and acquisitions gradually unified the systems, so that by 1950, 82 percent of all American phones were served by the Bell System. Bell’s parent corporation, American Telephone & Telegraph, today ranks as the firm with the greatest number of individual shareholders: 2,934,000 in early 1976, more than twice the number of its closest rival, General Motors. Altogether, the 582 million listed shares of AT&T stock in 1980 had a market value of almost $30 billion!

By 1900, long before the introduction of direct dialing, there were already 1.3 million phones in the United States. By 1910, the number had soared to 7.6 million; and by 1920, when “Number, please” was still the most common phrase heard through the telephone receiver, there were 13.3 million.

By the early 1950’s, there were some 53 million phones in operation here, one for every three persons. By the mid-70’s, 144 million phones were in use throughout the nation. American phones now register about 200 billion calls per year, or about 1,400 calls per phone.

The 1980s, which wasn’t too long ago, was the era of the landline. In 1980, there were some 360 million telephones in use around the world, with the United States by far the leader in phone ownership. Japan had about 35 million phones in service, Britain 19 million, West Germany 16, Italy 11, France 10, and the Soviet Union an estimated 18 million. At the other end of the scale, the Pitcairn Islands in the South Pacific could boast only twenty-nine telephones.

Surely, you’ve often wondered where the world’s busiest telephone might be found. Well, at last glance, that honor belongs to a phone in the Greyhound bus terminal in Chicago, whose bell ting-a-lings about 270 times each day!

The word phony, by the way, may or may not owe something to Bell’s invention. A New York paper once reported that “phony implies that a thing so qualified has no more substance than a telephone talk with a supposititious friend.” But most dictionaries trace the word to the expression fawney rig, British slang for a valueless ring.

The first commercial transatlantic telephone service was inaugurated between New York and London in 1927, with a charge of seventy-five dollars for the first three minutes, but the first round- the-world telephone conversation did not take place until 1935. Round the world? Well, the call was placed in New York, routed via San Francisco, Java, Amsterdam, and London, and received in an office only fifty feet from the caller’s!

Not surprisingly, there was only one person in the world capable of such telephone extravagance, the president of the American Telephone & Telegraph Corporation.

1 thought on “History of Telephones”