How Big Is the Colosseum In Rome?

An amphitheater is an arena surrounded by rows of seats, much like the modern football stadium. 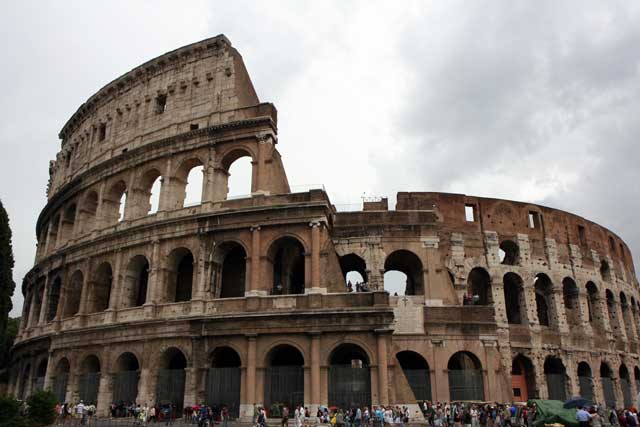 Many amphitheaters were built in the Roman Empire. However, none could match the huge Flavian Amphitheater in Rome, which became known as the Colosseum because of its “colossal” size.

The largest amphitheater of the ancient world, the Colosseum was completed in the year 80. But some of the structure that stands today was added after a fire damaged the amphitheater in 217. The Colosseum is oval in shape and about 620 feet long, covering an area of five acres.

The outer walls, 160 feet high, contain 80 entrances that led spectators to their seats. These spectators come to view gladiatorial combats and other spectacles. Though the Romans claimed that the Colosseum could hold 87,000 people, it’s now believed that it probably held no more than 50,000.

The Colosseum was not the only huge arena in ancient Rome. The Circus Maximus, used mainly for chariot races, could hold more than 250,000 people, a large percentage of the entire population of Rome!

During the twelfth century, the Colosseum was used as a fort. Later, people began removing stones from the amphitheater to build structures of their own.

The Colosseum was saved by the popes, who regarded it as a holy place because many early Christians had been put to death there by the Romans.