How did factory workers unionize the Ford Motor Company and When?

No one was more vigorously opposed to unions than Henry Ford.

As waves of strikes disrupted factories across the country in the late 1930s, as General Motors and Chrysler made concessions, Ford stood firm, convinced to the bitter end that unions were controlled by “predatory money interests in New York.”

The recalcitrant tycoon, by then in his 70s, saw himself as the boss—one who would issue orders and not negotiate, but one who took paternal pride in the well-being of his workers, assured good working conditions and decent pay, and considered that in the American spirit of individualism, each worker had to measure up or get out. 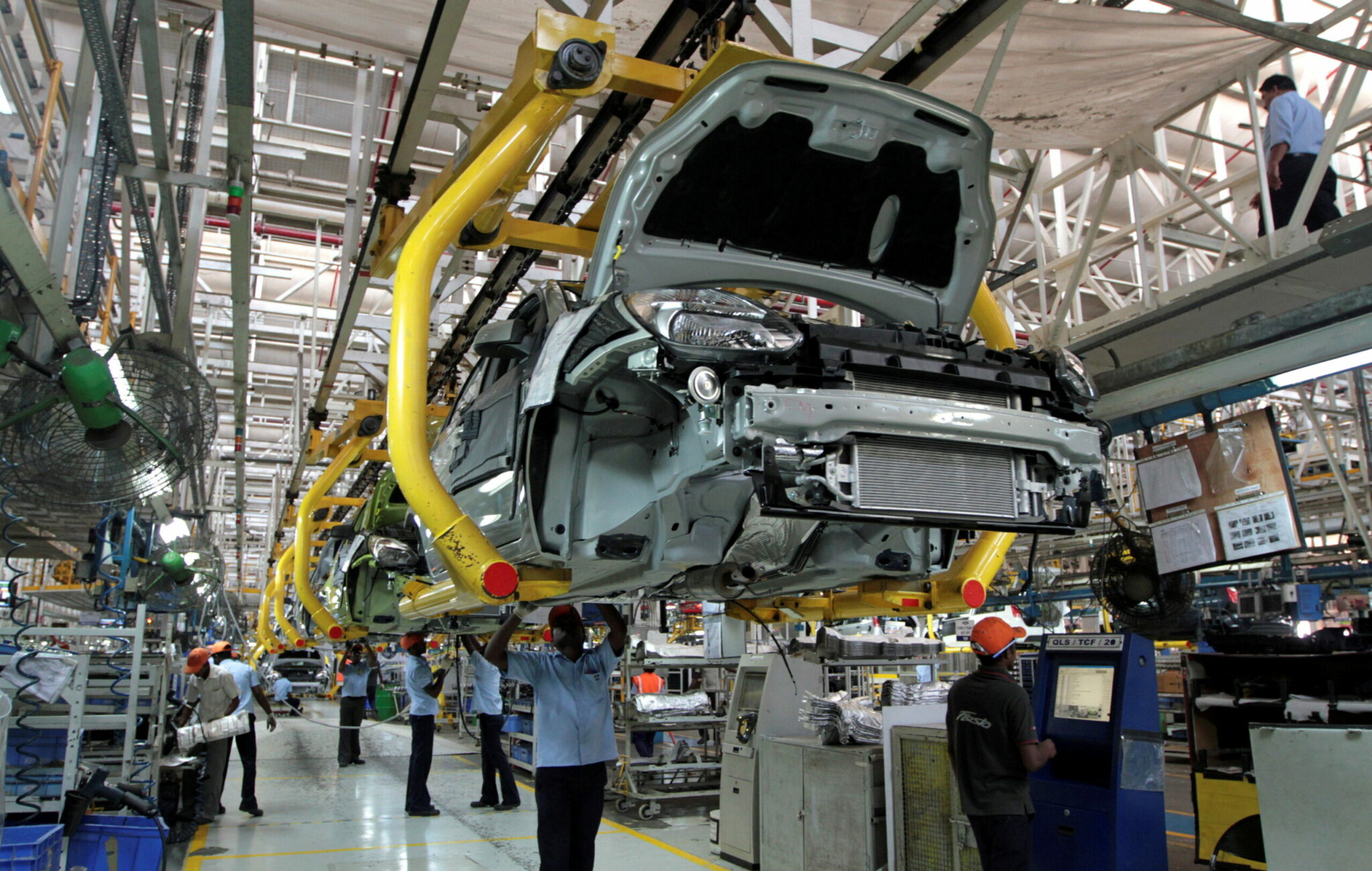 These ideals had served him well for years, but in the 1930s the $5 day was a thing of the past. With recessionary cutbacks, jobs were scarce, cheap labor was easy to find, wages stayed low and at times dropped, and working hours increased.

Ford faced the ever more potent threat of the United Automobile Workers (UAW), headed by confident young Homer Martin, a capable leader and excellent orator, who was assisted by George Addes, Richard Frankensteen, and a former Ford employee, Walter Reuther. Trouble flowed from Washington, too, as Senator Robert Wagner of New York introduced the Wagner Act, designed to ensure all employees the right to self-organization, collective bargaining, and other activities to safeguard their interests.

For a while Ford capitalized on the public’s distrust of labor and suspicions of Communist infiltration: over two thirds of those interviewed in a Gallup poll in 1937 opposed the effective, and increasingly widespread sit-down strikes that had paralyzed production at General Motors. Furthermore, he determined to obstruct the union efforts by delaying actions and by inciting confusion, intimidation, and disillusion. To head the battle against the organizers Ford could not have found a more aggressively opportunistic, brazen, and fearless man than personnel chief Harry Bennett. This tough ally befriended police, FBI, and powers in the underworld; he fortified the plant with “broken bruisers, ex-baseball players, one-time football stars, and recently freed jailbirds.”

There followed a reign of terror in the Ford plants, each man isolated from the next and fearful for both his job and his person, fearful even of speaking with (much less organizing) his fellow workers. Bennett’s pervasive espionage both inside and outside the plant resulted in the firing of employees on the slightest evidence, and in countless arrests of union agents.

Working conditions, meanwhile, worsened as employees were forced to swallow the “speedup,” which drove them to exhaustion, and the “stretch-out” (more machines for each man to oversee), which wore their nerves ragged. Many complained of “Forditis” or “the shakes.” Many were fired so that they might be rehired at a lower wage, and no consideration was given to seniority. The company made it a policy, in fact, not to hire men over 40, who were more apt to organize labor and push for the seniority rights outlined by union demands. Omnipresent fear of the soup lines compelled workers to submit to this pressure, although turnover was nonetheless rapid, due to sheer exhaustion.

Henry Ford’s antagonism to labor unions was even fierce enough to divide and alienate his own family. From the start his son Edsel took a more moderate line, wishing to acknowledge and negotiate with the UAW. But his humiliation and impotence in the face of his father’s regime left him tired, hostile, and rightfully jealous of the power allotted to Bennett. His mother, Clara, took his side, and ultimately had tremendous influence in bringing around her husband, whose powers of judgment were perhaps failing.

Bennett’s terror had slowed the UAW’s attempt to organize the River Rouge plant in Dearborn, Michigan, so in May 1937 Reuther, Frankensteen, Ed Hall, and others decided to take deliberate action. Having obtained permission from the Dearborn city hall to distribute their pamphlets, they arrived at the Rouge on the afternoon of the 26th.

Immediately they encountered Bennett’s goons, strategically posted at each entrance. Angelo Carusa, boss of a Detroit gang, two professional wrestlers, and a boxer swiftly ordered the union organizers to get out. As they turned to depart, they were met head on by another legion of guards, who attacked without a moment’s hesitation and without discrimination. The men were beaten and kicked brutally, Reuther thrown down some iron stairs, Frankensteen severely wounded in the abdomen. One organizer’s back was broken. But the press was on hand to record the gruesome details of the incident, which became known as the Battle of the Overpass. Millions would see the newspaper photographs, which could do Henry Ford no good in the public eye, and the photos would appear in court when the National Labor Relations Board (NLRB) filed a complaint.

Although the employees were more conservative in the Dallas plant, things were not peaceful there either. Dearborn sent Warren Worley down to Texas to organize an espionage squad of 30 to keep tabs on union activities inside the facility. Two UAW agents were beaten and another group of burly factory men armed with pistols, whips, and blackjacks was stationed outside. Scores of beatings ensued, and the police not only sanctioned the violence but often warned Worley when union agents might pay a visit.

In Kansas City, the UAW was close to a victory in 1937, claiming 2,000 members among the 2,500 Ford workers. Ford and Bennett determined to wipe out the union stronghold, and formed a company organization, the Blue Card Union, whose of spread rumors that the plant would be moved to St. Louis.

The following year the National Labor Relations Board charged the Blue Card Union with locking out and refusing to reinstate nearly 1,000 Ford workers, penalizing over 100 others for union activities, and in general practicing interference, restraint, and coercion. Many fearful employees withdrew from the UAW, but the organizers pressed on, and in response Bennett shut the plant for three months. The union announced a lockout strike; the company retaliated by firing all maintenance and production workers and announcing a move to Omaha. A desperate city manager flew to Detroit to plead on behalf of Kansas City. Ford agreed to reopen the plant with the stipulation that “men who wish to work are permitted to do so without interference.” Thus the police were to be on hand to break picket lines and arrest union leaders—a coup for Ford.

In the spring of 1938, Homer Martin managed to obtain some oral concessions from Ford by threatening legal action under the recently enacted Wagner Act. The company would acknowledge the UAW’s right to bargain for its members, workers would be allowed to wear union buttons, and those discharged for union activities would be rehired.

In return, Martin would withdraw UAW suits against Ford brought before the NLRB. Perhaps the old man, celebrating his 75th birthday with much ceremony and many tributes, was softening. But the concessions were never put into effect. Prolonged dissension within the UAW led Martin to resign in 1940 and his successors allied themselves with the Congress of Industrial Organizations (CIO). A stronger labor force resulted. The company was inundated with an unfavorable press, and several distinguished union men made it their task to inform President Roosevelt of any unfair firing of union members.

The culmination came as a harsh surprise on April Fool’s Day, 1941. When the union chairman and seven others were fired at the Rouge, some 1,500 men gathered at the superintendent’s office. Workers shut down three buildings immediately.

When Reuther arrived on the scene, 50,000 men stood there refusing to work. An official strike was declared, and the workers marched with much excitement and drama to the UAW local headquarters on Michigan Avenue. The union men blocked all entranceways to the Rouge, preventing anyone from going to work and preventing as well the departure of the 2,500 or so loyal-to-Ford employees who remained inside. These nonstrikers tried to break the picket lines and April 2 and 3 were marked by bloody battles. Eventually, food supplies inside ran low; the men in the plant took to gambling in crap games and racing around in the new cars. The plant was absolutely chaotic.

Despite the melee, Bennett and Ford would not budge. Their pleas for government support went unanswered, however, nor did their cries about communism persuade the public, and Edsel persisted in demanding the union be recognized. Bennett, in fact, laid all blame for the outcome on his shoulders, later claiming, “I don’t think the CIO would have won if it hadn’t been for Edsel’s attitude!”

As it was, the strike ended with Ford’s concession to allow an election under the NLRB, by which the employees could choose a union to represent them in establishing a contract. The outcome of this election, held in May, showed 70 percent in support of the UAW, 27.4 percent for an AFL-affiliated union, and a meager 2.7 percent against any union at all.

Negotiations for a contract took place in Detroit, Pittsburgh, and Washington, with Ford lawyer I. A. Capizzi, Harry Mack, Frank Nolan, and sometimes Bennett representing the company, and R. J. Thomas, George Addes, and Philip Murray speaking for the UAW. They prepared a contract and presented it to Ford, who had suffered a stroke and was failing rapidly. “I don’t want any more of this business,” he exclaimed. “Shut the plant down if necessary. Let the union take over if it wishes!” It was at this point (according to Allen Nevins and Frank Hill in their authoritative history of the Ford company) that Henry’s wife Clara brought pressure to bear, even threatening to leave him if he did not sign. Nevins and Hill suggest, furthermore, that Ford had showed readiness to concede when he spoke to Martin in 1938 and that now he considered public opinion as well as the embarrassment of the sordid NLRB hearings.

He signed the contract and it was a stunningly generous one. Edsel, furthermore, said it would apply to all Ford employees in all the plants. Now the workers would have a union ‘shop. All employees would belong to the UAW and the company would deduct initiation fees and monthly dues from each worker’s pay. Over 4,000 workers who had been fired would receive back pay, and the company agreed to pay wages equal to the highest amount paid by any competitor, as specified by the UAW.

In return, the union dropped all charges against the company. At last the battle was over. The way was open for a new method, a new spirit, and the alleviation of at least some of the grievances of the weary forces of labor.

Have questions? Email us: kar[email protected]