Reindeer got their name because they belong to the deer family, and they can wear reins, but that’s the simple version. 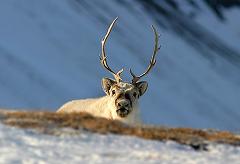 More likely, the name rein (deer) is of Norse origin from the Old Norse word “hreinn”, which goes back to Proto-Germanic hraina and Proto-Indo-European kroino, meaning “horned animal”.

In Finnish the reindeer is known as poro and in Sami, “poatsu”. The name caribou comes from the French word Mi’kmaq qalipu, meaning “snow shoveler”, referring to its habit of pawing through the snow for food.

The caribou is known by the name “tuttuk” in Inuktitut, and Cree-Montagnais-Naskapi dialects the caribou is called “atihkw”.

Reindeer are herbivores, but they can survive the hard, frozen winters. They dig in the snow for lichen, a symbiotic alga-fungus growth that forms on the sides of rocks and trees.

The light green, paperlike moss you see growing on trees and rocks in the United States is one type of lichen, for instance.

This growth is the reindeer’s main dietary source when snow covers the ground.

Reindeer also eat the leaves of willows and birches, as well as sedges and grasses. There is some evidence that Reindeer will also feed on lemmings, arctic char, and bird eggs on occasion.