Rudolph the Red-nosed Reindeer made his debut in 1939. 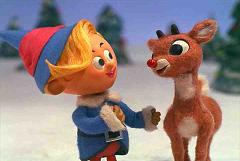 Not surprisingly, Rudolph was originally created as part of an ad campaign.

The Chicago-based Montgomery Ward department store asked an employee, veteran copywriter Robert May, to come up with a character the store could use in holiday coloring books to pass out at Christmas.

As he was good with children’s rhymes and limericks, it didn’t take long for May to come up with the misfit reindeer story, based somewhat on his own childhood experiences as an outcast in school.

The name Rudolph was actually May’s third choice, by the way. First he picked Rollo and Reginald, each of which worked in the rhyme but sounded too upbeat and too English to be used in his final version.

The image of a red nose was closely linked to that of alcoholism, and the last image the department store wanted to push onto little holiday-shopping kids was that of a stumbling drunk pack animal.

However, May sent an illustrator down to the local zoo and had him draw up some images of a reindeer, fully equipped with a light bulb-shaped nose, and his boss was won over.

The character took off, and Montgomery Ward reaped the financial benefits in a big way. Unfortunately, May did not.

His wife died of cancer at about the time he was writing the Rudolph story, and not long afterward he found himself in financial trouble and saddled with large medical debts.

Since he had created Rudolph on company time, he received no royalties from his brilliant creation. Luckily, though, this isn’t another run-of-the-mill company-exploits-employee story.

In 1947 Montgomery Ward president Sewell Avery decided to give May the rights to his character.

From there, May was able to turn the story into a hugely popular nine-minute cartoon, which played in movie theaters in 1948, the widely known song, and other commercially lucrative incarnations, the most memorable and popular being the stop-camera-motion TV show narrated by Burl Ives.

May’s money woes were over.

Still, seven years after he quit Montgomery Ward to market Rudolph, he returned to the department store and his old job as a copywriter and stayed there until retirement.