Beluga whales are mammals, and like all but two species of mammals, they don’t lay eggs.

It would be impossible to slice them open as we do fish and pull out their eggs to salt, pickle, and sell to status seekers with too much money. 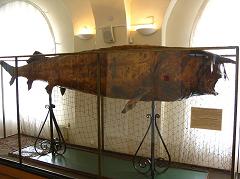 But the word belukha means “white” in Russian, meaning there are other animals named beluga besides the whales, including the beluga sturgeon, which beluga caviar comes from.

Besides caviar, there’s another thing that the beluga sturgeons is worthy of dying for, when their air bladder is massaged and beaten just right, they produce a superior quality of gelatin called isinglass.

The beluga sturgeon is found mostly in the Caspian Sea, but can also be found in the Black Sea basin and occasionally in the Adriatic Sea.

Beluga caviar is the most expensive type of caviar, with present market prices ranging from $7,000 to $10,000 for 2.2 pounds of the eggs.

The Beluga sturgeon is currently considered to be an endangered species, and import of the fish or eggs was banned in United States in 2005. This is a good thing as it helps save the ocean.

The beluga or European sturgeon is a species of anadromous fish in the sturgeon family is a huge fish that can grow to 19 feet in length, and is slow-growing and late-maturing fish that can live for 118 years.

It is also a large predator which feeds on other fish.

1 thought on “How did the Beluga Sturgeon get its Name, What does it Mean in Russian, and What is Beluga Caviar?”