The electric eel is the only species of its kind that can generate powerful electric shocks for self-defense and hunting prey. 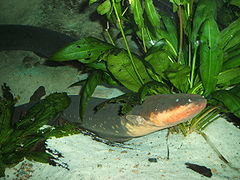 Electric eels live in the fresh waters of the Amazon and Orinoco Rivers in South America, and is not an eel but a knifefish, despite its name.

An electric eel can produce about 500 watts of electricity in a single discharge, and is how it got its name.

Before you start looking for a place to attach an electrical outlet, you would need a surge protector first.

An electric eel typically delivers only three to five bursts of electricity when it discharges, each lasting only about one-five-hundredth of a second.

So that makes it useless for almost everything we can think of. Well, maybe it could be used as a stun gun, its voltage is enough to temporarily stupefy a human being. However, doing so would be a waste of wattage for the eel, since it mostly eats frogs and small fish.

The electric eel is a fish related to the carp and catfish, and is highly prized by fish keepers and aquariums because it is extremely difficult to catch.

It is also not that unique, scientists have identified about 500 other species of fish that can also generate electricity.

Save the Salt and Battery.