How does the Fur on a Sea Otter Help Keep it Warm in Cold Water and do they have Blubber like Whales?

The sea otter is a marine mammal that can be found on the coasts of the northern and eastern North Pacific Ocean. 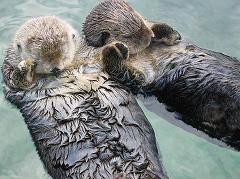 Its thick luxurious fur almost drove them to extinction, and is the thickest fur in the animal kingdom.

Natural oils in the dense fur repel water and trap tiny air bubbles, providing insulation. It is not just vanity that keeps an otter carefully grooming its fur for hours on end.

The otter used to be far more prevalent than it is today. The animal was once found up and down the Pacific coast until hunters and furriers reduced its total worldwide population to about 2,000 in the early 20th century. Since then, government protection kicked in, and the otter population is now up to about 150,000.

Because it relies so much on its fur, the sea otter is one of the hardest-hit animals after an oil spill.

The oil mats down its coat, destroying its insulating properties and making the otter prone to death by hypothermia.